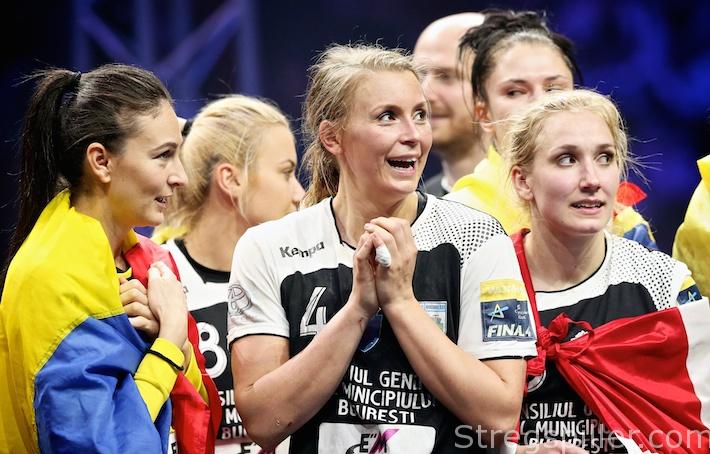 “Bella” dreaming of a repeat

INTERVIEW – Swedish star Isabelle Gulldén of CSM Bucuresti talks to stregspiller.com about the upcoming Champions League quarter-finals against Ferencvaros, her dreams of another Champions League triumph and a very fast-turning coaching carousel at her club.

Things have turned out quite well for Isabelle Gulldén and her teammates at CSM Bucuresti in their first season after winning the Champions League trophy in 2016.

Recently, they won the Romanian championship for the second year in succession – as expected – and once again, they are in the quarter-finals of the Champions League.

Still, one of the greatest stars in the team, Swedish playmaker Isabelle Gulldén, is only partially content.

“There have certainly been ups and downs during the season.

“We have had some great performances along the way, but there have definitely been some poor matches in between, and that goes for me as well as for the team.

Along with the rest of the team, she is preparing for the Champions League quarter-final against FTC-Rail Cargo Hungaria – or Ferencvaros – the name, the Budapest based club is still known best for.

Friday evening, Polivalenta Ioan Kunst Ghermanescu arena, in Bucharest will be the venue of the first one of two matches that stand between CSM and another FINAL4 appearance.

“Of course, it would be fantastic to play another FINAL4, especially after that awesome experience last year,” says Isabelle Gulldén, remembering the dramatic final against Gyor in particular, when she scored no less than 15 goals, as CSM won 29:26 after extra time and a penalty shoot-out.

“First, however, we have to overcome Ferencvaros in the quarter-final, and that will be hard enough as it is.

“Ferencvaros have played very well lately, so for us it will be a really tough challenge.

“First of all, I only hope we can play a good match at home on Friday night and boost our chances before the return match in Budapest on Easter weekend.

“Of course, we can come up with some good reasons for optimism, when we think back of last season.

“Back then, we even came in from fourth position in our main round group and we were the obvious underdogs against Rostov-Don who were undefeated at the time.

“However, succeeding in these two matches was a turning point for us, and we hope for something similar this time.

“Furthermore, we have been training very well, and this gives reason for optimism as well,” finds Isabelle Gulldén who recently extended her contract with CSM for another year after rumors had been linking her to several other European top clubs.

“I feel well in the club and in the city, and I would very much like to win the Champions League again, if not this year, then next year, when we are going to have a really strong team,” says the 27-year-old Swedish international.

Claiming that CSM will have a very strong season next year is absolutely no overstatement.

Romanian super star Cristina Neagu will be joining from Buducnost, while Norwegian internationals Amanda Kurtovic and Marit Malm Frafjord are coming down from Larvik.

Gulldén is looking forward to the two, new Scandinavian teammates, not the least because fellow Swede, Linnea Torstensson is leaving the club in the summer.

Kurtovic and Frafjord are former teammates of Gulldén, when the trio played together in Danish Viborg HK, earlier in this decade.

“It is always nice to be able to speak your own language, when you are in a foreign country, and with these two, I can also talk about other things than handball, which is a good thing from time to time.

“Especially, I am looking forward to reuniting with Marit who is a really close friend of mine and has been for a long time,” she says.

Bella is playing her second season at CSM after six years with Swedish IK Savehof, followed by another six years in Viborg.

After her arrival in the Romanian capital, there have been so many coaching changes at the club that a relevant question these days could sound like this: “Who is coach at CSM this week”?

Right now, it is a Swede.

46-year-old Per Johansson is the fifth head coach at CSM within the last two years.  He has replaced Romanian Aurelian Rosca, last Friday

Johansson´s greatest coaching achievement, so far, was winning the silver medal with Sweden at the European championship in 2010 – but he has not held a coaching job for the past five years.

Still, Isabelle Gulldén is happy with the new coach – and not only because he is a fellow Swede.

“He has added some more intensity to our training.

“In fact, there’s been a lot more quality in our training lately, and this increases my optimism ahead of our Champions League quarter-finals.

“However, we have not played any matches since he joined, so we will have to wait until Friday and see how it really turns out,” she realizes.

And number six is on the way

As successful as he has been in the past, Per Johansson is just a temporary solution.  Coach number six is already on her way. Helle Thomsen will take over from the start of the next season.

With Danish Thomsen, CSM will get a leader who has been successful in all her jobs, until now.

At FC Midtjylland neither poor results nor lack of support from the players led to her dismissal.  She also had a successful stint with the Swedish national team and today she is at the helm of the Netherlands aiming for World Cup 2017.

Isabelle Gulldén openly admits that the prospect of having Thomsen as coach again has also played a part in her decision to stay with the club.

“I am really looking forward to having Helle as coach again.

“I remember her as national coach in Sweden, where she did an outstanding job, and I am in no doubt that she will do very well here too.

“For now, however, my focus is on the current season, where it would really mean a lot to me, experiencing another FINAL4.

“But as I said, Ferencvaros will be a tough hurdle in the quarter-finals!”