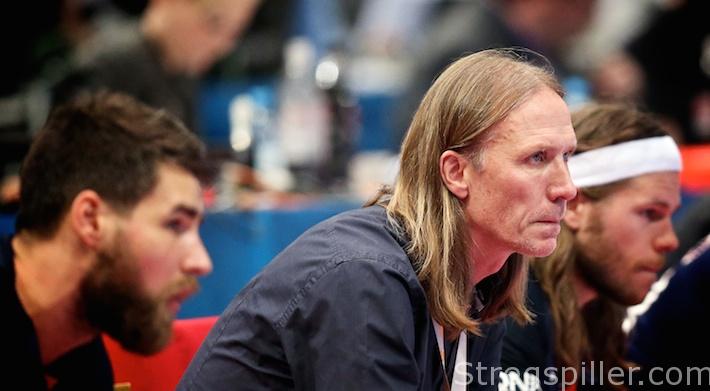 When you think about Swedish handball who comes to mind?  Sure, Magnus Wislander, the world handball player of the century with Stefan Lövgren and Staffan Olsson trailing closely behind.  Possibly Per Carlen or the “Flying Köttbular” Ljubomir Vranjes?

From today’s group of players sporting the yellow jersey and blue shorts only Kim Andersson has come close to that fantastic generation, except for goalkeeper Mattias Andersson.  But a goalie can’t win titles by himself and years after the legendary “Bengan Boys” retired, two of them, Olsson and Ola Lindgren, are trying to find the identity of the “Bengan Kids”.

Yes, the team won a silver medal at the 2012 Olympic games in London, but that came as a big surprise and just a few months after missing out on qualifying for the 2013 World championship in Spain.  Although, Sweden has a history of going far in the Olympics, winning silver three times in a row between Barcelona and Sydney.

While the handball tradition is still alive in Sweden and players are spread all around Europe, the high point of the “Allsvenskan” is behind them, in all likelihood.  Kim Andersson had to come out of international retirement once again, but he won’t be able to rescue the sinking ship.  Hammered by injuries that forced him to leave the German league earlier than expected, he now plays for Ystads IF in Sweden to give his body the much needed rest.

While young players often admire big stars from the past, it has hampered the development of several players.  Kim Ekdahl du Rietz was the next big thing in Swedish handball, but his body didn’t like the idea of becoming a superstar and he said goodbye to the national team at the age of 25.  Now Lukas Nilsson, who joined Kiel over the the summer, has to shoulder the burden and follow into the footsteps of a once-in-a-lifetime generation of outstanding handball players.

Prior to the start of the Rio Olympics, Kim Andersson had suffered another injury setback; so he won’t be at 100 percent when Sweden faces European champion Germany in the first game of the competition.  The sole world class player on the roster will be Mattias Andersson, who shines in the Bundesliga for his club team Flensburg, but had major problems finding his form in Poland during EURO’16 in January.

Yes, I know, Tobias Karlsson is also a world class player – no doubt about it.  But he “only” plays in defense and can’t influence the offensive game that much.  And I still can’t rid myself of the feeling that, while sitting in the hotel during tournaments watching fans asking for pictures with the former stars rather than the current one’s, that Sweden’s players can’t find enough self-confidence to play up to their potential.

The quality of the team is good enough to have one great game, maybe even in the quarterfinal.  But several tough opponents wait along the way – I can’t imagine the Swedes to finish first in a group with Germany, Poland and Slovenia.  They will beat Egypt and also the hosts from Brazil, but the lack of depth and a tough schedule should be too much for a team that lacks a true leader.  Keep in mind – Kim Andersson won’t be the same Kim Andersson we all know from the past.