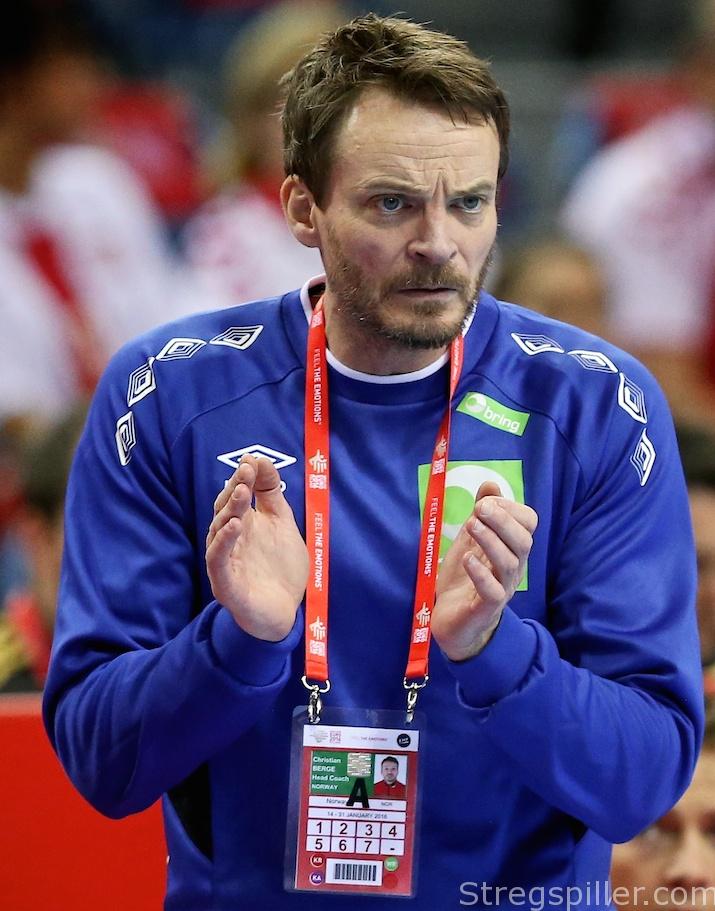 Berge with the chess brain of Magnus Carlsen

With tactical skills that remind me of his countryman, triple chess world champion Magnus Carlsen, Christian Berge is leading Norway towards another great achievement at a major championship.

As this is not a chess site, we are not going to talk a great deal about Magnus Carlsen anymore.

Yet, when I look at national coach Christian Berge´s accomplishments with Norway´s male national team at the ongoing Handball World Championship, I cannot help but see commonalities between the way Magnus Carlsen moves his pieces on the chessboard and Christian Berge´s tactical moves on the handball court.

And I note, that Berge does not draw his players from the strongest leagues the world – far from it.

For instance, eight of his players – among them several key players – earn their daily living in the Danish league, a collection of clubs that are definitely not among the strongest in Europe.  We only have to look at the Danish clubs’ performances in the Champions League year after year to remind ourselves of the obvious.

Still, the 43-year-old former Norwegian international and Flensburg playmaker has managed to form an international top team – thanks to his tactical skills, but also because of having access to one of the most talented handball player’s on the planet.

Aalborg star and future PSG player Sandor Sagosen, is a unique type of player who is capable of carrying out the coach´s ideas on the court.  For some time now, young Sagosen has been called a future world star.

That description is no longer correct.  Sandor Sagosen already is an international acclaimed handball star and certainly an essential figure on Berge´s chessboard at the 2017 World Cup.

Finishing second in Group A right behind top favorite and host, France, was a considerable achievement in itself, although the Norwegians benefited from Poland´s many injuries and the fact that Russian handball has not developed any further over the past 15 years.

Still, anyone who calls Norway´s results in the group phase a coincidence was proven wrong, when Berge´s men defeated Macedonia by a margin of no less than 10 goals in the round of last-sixteen – 34:24.

Yes – Norway benefited from some misfortunes of their opponent.  For example, the absence of injured key players such as Filip Mirkolovski and Dejan Manaskov were obviously a severe blow to the Macedonians.  In particular, the absence of Mirkolovski in ruined Lino Cerva´s seven-against-six option.

But a 10-goal win in the first knock-out match shows that Norway is a team that must be given proper attention at this championship.  They have already confirmed that their fourth place at the European championship in Poland, a year ago, was no fluke.

Yet, Norway did hit a soft spot after the impressive showing in January 2016, failing to qualify for the Olympics and for the current World Championship.  After losing the play-offs to Slovenia, Norway is in France courtesy of a wildcard.  And with Germany in mind, we have seen before, how successful wildcard teams can become once getting a second chance.

How long Norway will last this time, remains to be seen, but so far, it is impossible – at least for me – to not be impressed of what Berge has already achieved.

Not even the absence on Rhein-Neckar Löwen’s right-back, Harald Reinkind, appears to be a problem, and neither does the eye disease of Norway´s usual, first-choice goalkeeper, Ole Erevik, who is now out of the Norwegian squad.

In Erevik´s place, young Torbjørn Bergerud, who did not exactly have a fantastic season with Danish Holstebro, showed impressive skills all of a sudden.

Of course, surprising world-class performances like the one from Bergerud are fortunate developments for Christian Berge, but his success with the Norwegian team is far from being based on luck alone.  Berge´s tactical skills and his way of handling his players on and off court are the main reasons, why Norway is in the quarter-final.

Here, they will meet a Hungarian squad that’s poised to go further in the tournament after sending Olympic champion, Denmark, out in the round of last-sixteen.  But Norway’s media outlets have already started the hype.

“Norway´s young national team can rule the world,” according to newspaper Stavanger Aftenblad.

Although Norway is still a bit away from ruling the world of men´s handball, in fact after the quarter-final on Tuesday against Hungary it may all be over.  But Norway does enter the fight as favorite.

Christian Berge may also soon be gone as Norway’s national coach, as well.  If SG Flensburg-Handewitt release Ljubomir Vranjes from his current contract, he will go to Hungary assuming double duties as national coach and leading Veszprém.  Berge is widely expected to become his successor in Flensburg.

So far, the Norwegian Handball Federation has been adamant about not allowing their national coaches to work two jobs at the same time.  And as of now, Flensburg’s decision regarding their long time coach is unknown.

Norwegian handball fans should just pray for Vranjes staying in Flensburg, as it will be difficult for Norway to do without Christian Berge´s chess brain.