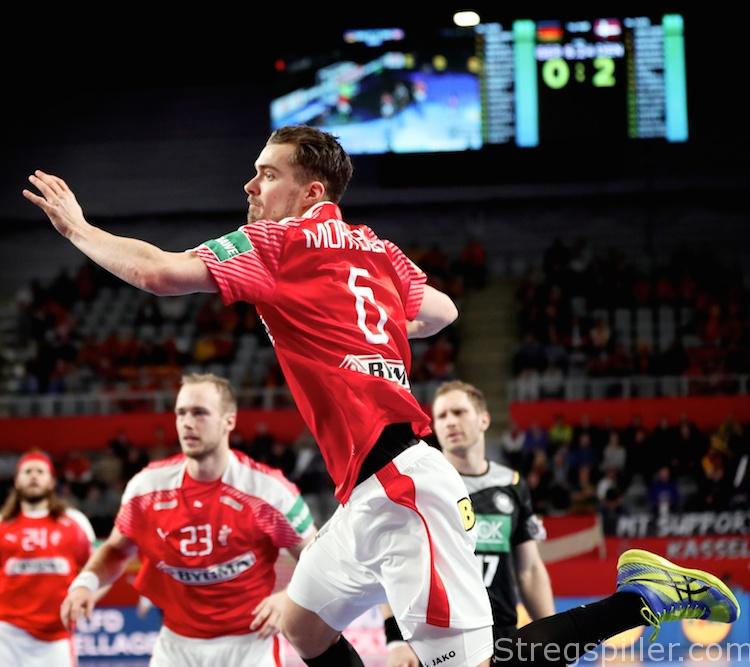 “The best feeling you can imagine”

INTERVIEW – Denmark´s “match winner” against Germany, Casper U. Mortensen speaks to stregspiller.com about playing against his Bundesliga colleagues, seven-against-six, and that his team being very close to the semi-final at EURO 2018.

With a minute plus left on the clock, the 28-year-old left wing brought Denmark ahead (26:23), too much for Germany to catch up with, although they reduced the deficit two more times before the final result read 26:25 in favor of the Scandinavian’s.

“Did I really score the last goal?”

“Well, it is always nice to send the ball into the net, and I am obviously happy that we defeated Germany, who are a really good team that has often caused us trouble in the past.

“I know many of the German players from competing in the Bundesliga , and I admit that this circumstance makes it even more important to me, to play well against them,” says Casper U. Mortensen who scored six goals in the match.

The win pushed the Danish team extremely close to the semi-finals. In fact, other results in Group II may already place them there before their last main round match against FYR Macedonia, on Wednesday. And if not, the Danes still hold their fate in their own hands, as a draw against the Macedonians will do the job, moving to the next stage at EURO 2018.

“It was a highly intense match against Germany and very tactical from both sides, who both played seven-against-six for extended periods in the match.

“Of course, for us it is a great situation to make our own decisions regarding the semi-final ticket.

“I think, we all feel really good about ourselves at the moment.”

Always special to play against players you know well

As Casper U. Mortensen mentioned, many of the Danish and German players know each other from their daily life in the Bundesliga, and this will always make internationals matches between the two nations special.

“To us, it can be an advantage as well as a disadvantage, as the Germans know us as well as we know them.

“We know each others´ running patterns etc, and it is always nice to get the better end of them, as we did on Sunday night.

“Of course, as many of us play against each other or together (in the same club ed.) so often, also means that there will always be “fights within the fight”, when we battle Germany.

“The fact that we know each other so well, also means that games against Germany will always be very tactical like the one on Sunday. It was a very cool game to play – not the least because we won, of course,” says the TSV Hannover Burgdorf player who was in no doubt that the seven-against-six attack, a tactic the Danes employed right after halftime, became a deciding factor.

“We managed to open our game when in the attack, and that meant a lot.

“Of course, the Germans practice seven-against-six a lot as well, and it is easy to claim that we executed it better as we won the game. But I do think that we managed this tactical variation very well, and I am pretty sure that it was not the last time you saw us playing in this formation, in this tournament,” says Caper Mortensen.   Another important factor in Mortensen’s opinion was moving Mikkel Hansen from left back position to the center, in the second half.

“That meant a great deal. We really wanted to get Mikkel´s shooting going.

“He is an extremely important player to us, so it was fantastic to see him getting better success after the adjustment – but a lot of praise goes to Hans Lindberg who did brilliantly on right wing,”

As mentioned before, the Danes hold their semi-final berth in their own hands. A fact that makes Denmark´s number one choice on left wing even happier.

“It really is a great feeling that we can decide everything in our last match against Macedonia, if we do not reach the semi-final before, already.

“Right now, however, I want to focus on the match against Macedonia and that a draw will be enough for us, no matter what.

“We have three days to prepare for this match, and our situation could hardly be any better.

“It feels really cool right now – the best you can imagine,” states Casper U. Mortensen.