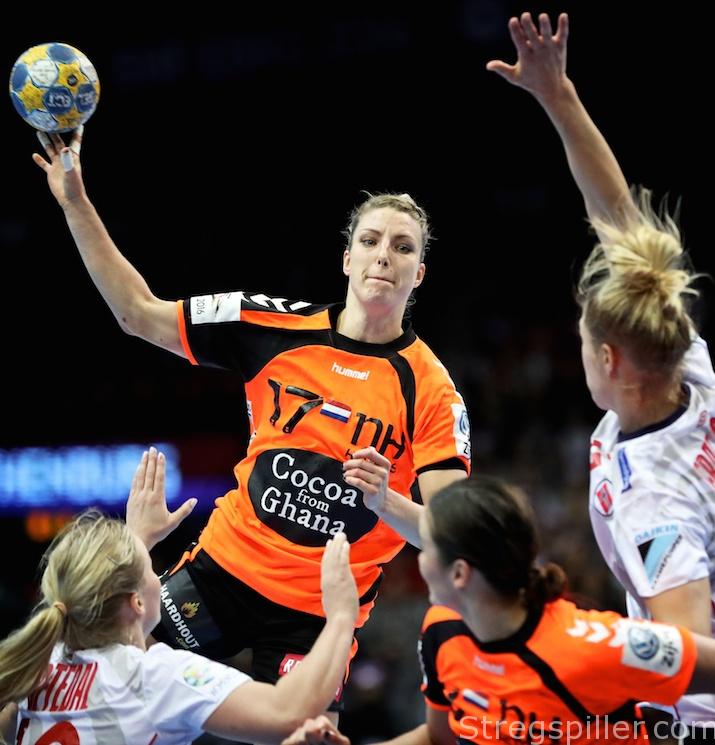 Which female handball players impressed us the most in 2016?  Based on the performances in the Champions League, the Olympics and the European championship, stregspiller.com presents a Women´s All Star Team 2016.

2016 was a year of many outstanding and thrilling moments in women´s handball.

Need I remind you on the incredible Champions League final in Budapest back in May, as Champions League debutants CSM Bucuresti defeated the favorites from Gyor 29:26 after two extra time periods and a penalty shoot-out?

Or Russia´s advancement to the Olympic final after one of the best women´s handball matches in history – the semi-final against Norway?

Or the exhilarating final at the European championship in Sweden, six days before Christmas, when Norway defended their European title in a narrow 30:29 victory against the Netherlands?

2016 was indeed a year of many exciting games and numerous fantastic performances by individual players, but who impressed us the most?

I have endeavored to assemble a Women´s All Star Team 2016, based on the Champions League, the Rio Olympics and the European championship – knowing that many people may disagree with me.  Anyway, here we go.

In a close race among several qualified candidates, I have picked Laura Glauser.

The goalkeeper duo, Glauser/Leynaud played a crucial part in France winning a silver medal in Rio and bronze in Sweden.

Furthermore, Glauser´s efforts in goal of Metz Handball were just as critical for the French champion’s qualification to the main round of the Champions League.

Other notable candidates were Kari Aalvik Grimsbø and Jelena Grubisic, the latter one mainly because of her impressive performance in the Champions League final 2016, and Sandra Toft who was instrumental in Denmark reaching the semi-final at the European championship.

Another close call, but the award goes to Carmen Martin.  The 28-year-old Spanish international on her own was not able to bring Spain as far as they wanted to go in Sweden – that’s hard to accomplish from a wing position – still, she managed to showcase her enormous skills in the competition.  But it was her performance at CSM in the Champions League – especially back in spring – that earns her the winning nomination.

There is no player above or even close to Nora Mørk.

Not only did she – once again – play an essential part in Norway winning another major championship.  She also managed the change from Larvik to Gyor back in the summer to become a major factor in the squad of Hungary’s handball powerhouse.

Mainly based on her strong showing back in Rio, Alexandra Lacrabere from France became the runner-up in close competition with Anna Vyakhireva from Russia.

Among several qualified candidates, the honor goes to Nycke Groot.

She did not managed to lift an international trophy in 2016, as she was runner-up with Gyor in the Champions League final as well as with the Netherlands at EURO 2016.

Yet, her skills as playmaker as well as her shooting abilities are so outstanding that she wins the nomination of “Best Center Back” in 2016, in my humble opinion.

Stine Bredal Oftedal from Norway was another rather hot candidate, but at the European championship, she was missing a bit of consistency, a quality that usually characterizes her play.  The same applies to France´s Allison Pineau.

If Isabelle Gulldén would have managed to keep her level from the Champions League matches with CSM that we saw in the spring, she would have been a very serious contender as well.  But unfortunately, Bella´s shape in the fall was far from it.  A thigh injury suffered shortly before EURO 2016 is another part of the explanation.

The choice here was almost as “difficult” as for the one on the opposite back position.

Cristina Neagu plays (almost) in a league of her own.  Limiting her radius on the handball court is close to impossible for any defense formation and with a shot as hard and varied as hers’ she is a nightmare for most if not all goalkeepers.

Actually, Estavana Polman was a contender as well, because of her services for the Dutch national team on this position.

Stine Jørgensen also deserves mentioning, but the fact that she played most of the games at the European championship in the center back position made it more difficult for me.

Her speed running counter attacks and diverse shot selection, make her a player that’s hard to replace at her club HC Vardar or the Norwegian national team.

Siraba Dembele from France comes in second place but keeping some distance to Herrem.  While Majda Mehmedovic was a reliable contributor for Buducnost in the Champions League during the spring, her change to CSM has not been particularly successful so far.  And on the national team level, she slipped together with Montenegro, in Rio as well as in Sweden.

Even though she missed playing most of the time during the fall, including the European Championship, Heidi Løke remains the “queen on the line” – at least that’s the way I see it.

What she did for Gyor as well as for Norway before she got pregnant just proves that she still is the best line player in the world.

Close to Løke ranks her national teammate Marit Malm Frafjord.  The amount of work she handled at both ends of the court at the European championship was simply magnificent.

Last but not least, Yvette Broch must be mentioned.  She has taken a big step forward in Gyor and the Dutch national team.

A great team needs a great coach. That is an obvious fact.

Having said that, I have chosen Kim Rasmussen as the top “performer on the bench”.

What he did with Champions League debutants CSM Bucuresti was achieved against all odds.  And winning the Champions League last season will remain as one of the greatest coaching accomplishments of 2016.

The quality of his work as Hungary’s new national coach cannot be judged yet due to the flood of injuries that hit the team before the European championship.

Another Dane was also in the running.  Based on her achievements with FC Midtjylland and the Swedish national team back in spring and with the Dutch national squad in the fall of last year, Helle Thomsen would have been deserving of the number one spot as well, but Rasmussen beat her by a yard or two.