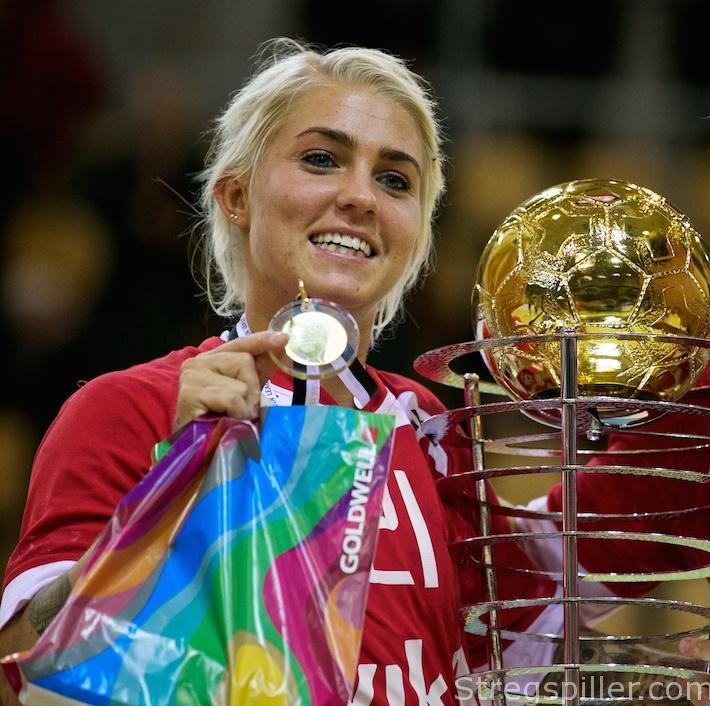 “Beyond our wildest dreams”

INTERVIEW – Despite opening the main round with a defeat, Kristina Kristiansen, playmaker of Nykøbing Falster still finds the 2017/18 Champions League main round more than she and her teammates dared to dream about.

In this interview, she also explains why she extended her contract for another four years.

When Nykøbing Falster Håndboldklub won the Danish championship for the very first time in 2017, quite a few people were a bit anxious how they would do in the Women´s EHF Champions League.

Not only was the team from Denmark’s south-eastern corner a debutant to Europe’s premier handball league but they has also had to say “goodbye” to three key players after their domestic triumph, in the spring of last year.

The charismatic coach, Niels Agesen, had left as well and was replaced by Jakob Larsen, who had some previous success with the men’s team at GOG, but never coached a women’s club before.

New players were signed – still it came a surprise to many when Nykøbing did as well as they did in the Champions League group matches.

The 25:22 victory against CSM turned into a masterpiece, and the mental strength the team showed winning the thriller at home against Krim (26:24) was equally impressive.  It all meant that Nykøbing would start the main round adventure in Group 2 on four points.

Sunday a week ago, they opened their main round campaign with a 25:29 loss versus Rostov Don, but that defeat did not do much in terms of ruining Nykøbings’ achievements thus far.

Nykøbing’s playmaker, Kristina “Mulle” Kristiansen, admits that reaching the main round was far and beyond what she and her teammates had dreamt of before the season.

“We did not expect it at all.

“We were just happy to play in the Champions League, and we were hoping to emerge from our group and go on. But taking four points with us and defeating Bucharest has been beyond our wildest dreams.

“I am sure it is something that will not be forgotten in Nykøbing Falster,” Kristina Kristiansen tells stregspiller.com.

Hoping to do even better

Apart from CSM and Krim, who Nykøbing already met during the group matches and Rostov Don, Nykøbing will also meet Györ as well as FC Midtjylland.

“Of course, our next opponent is tough as well, but a chance to advance even further is still there – absolutely.

“So far, we are just happy and proud that we’ve made it this far, and we still intend to enjoy every game and every minute,” she says.

For their Champions League matches, Nykøbing leave their usual home ground, as the arena does not meet the requirements.

Instead, they’ll move a bit north to Næstved Arena, a circumstance that hasn’t turned into a handicap, according to Kristina Kristiansen.

“We have a very fine home ground in Næstved, where we get fantastic support from the crowd – they push us even more towards a great performance.

“Every time I hear the Champions League anthem, I get a particularly good feeling in my stomach and I know it is the same for my teammates – we really enjoy it there.”

Dreaming of the quarter-final

Currently, CSM Bucuresti are on top of Group 2 with ten points, followed by Rostov Don (8) and Györ (6).  Then come Nykøbing and Krim Ljubljana with four each, while Midtjylland are sitting on two points.

It all provides Nykøbing with a decent prospect with regards to a possible quarter-final berth.

“A quarter-final sounds so wonderful in my ears and I would love it to become reality, but it’s still something we’ll have to work for very hard.

“It is our next goal, of course – and it would be really, really great to achieve this objective,” finds Kristina Kristiansen.

The fans in Nykøbing and the rest of Denmark can look forward to following “Mulle” Kristiansen close by.

Despite being approached by several foreign top clubs, she will stay with the current Danish champion as she recently extended her contract with Nykøbing until the summer of 2022.

“A foreign adventure is not on the agenda, right now. I have signed until 2022 and that is because I feel really good in Nykøbing.

“I enjoy to start from the bottom, so to speak, and be part of building something new and strong – and that is exactly what I have a chance of doing here.

“We already reached a peak winning the Danish championship last year and it can get even better.

“Here, I have my family around me – I am a real family person and an individual who needs a lot of security and reassurance.

“When I received the offer for the (contract ed.) extension, I was in no doubt that this was the way it should be and I am happy about the decision,” says Kristina Kristiansen.