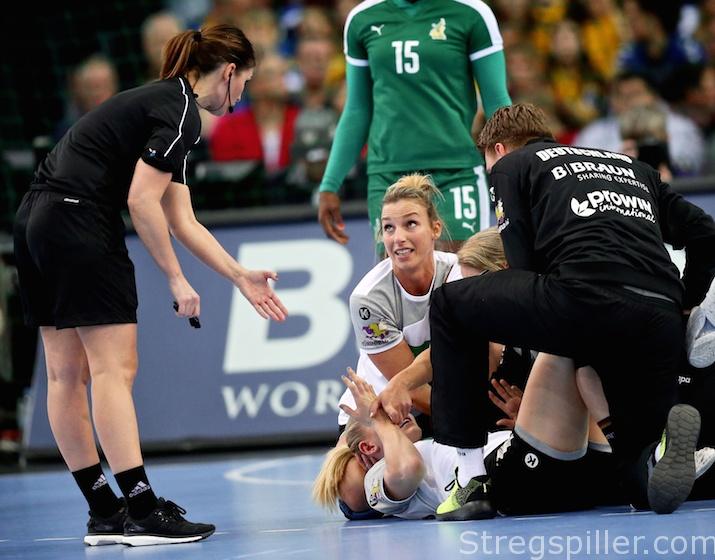 Exactly two minutes and ten seconds were played in the opening match of the 2017 World Cup when host nation Germany lost maybe the most important player, Kim Naidzinavicius, to a tournament-ending injury.

The 26-year old tore her anterior cruciate ligament in her left knee colliding with an opponent in a game that was won easily. The former U20 world champion will be missed up to six months, a huge blow for both – her club and her country.

Actually, it’s much bigger than that, because the German team is already depleted by injuries. While leading nations like Norway or The Netherlands are able to absorb losses of key players because of deeper rosters, the German team just can’t. Emily Bölk, 19 years of age and seen by many as the future superstar of women’s handball, is not at 100 percent and was rested against Cameroon, while right-back Anne Hubinger didn’t even make the list of 28.

So when the tragic news was confirmed by the German handball federation late last night the first thing that came to mind was that this is not only a huge blow, it’s a major setback and maybe even the worst nightmare possible. Naidzinavicius was seen as a great talent ever since and she conquered the German league at a young age; she played well but nothing more until she left Bayer Leverkusen and joined SG BBM Bietigheim prior to last season, to take the next step in her career.

And she did just that. Quickly she grew into a leadership role and showed her quality in the group stage of the Champions League, scoring a whopping 47 goals, and sharing second place with Norwegian, Veronica Kristiansen.  She also learned to take responsibility, and she began dictating the pace of the game in offense and organized matters in defense. To sum it up, she had developed into an international top player.

Will anyone be able to take her role in the team? When it comes to leadership, I think Germany got some valuable options, for example Anna Loerper, who brings plenty of experience to the table. The same goes for Kerstin Wohlbold, and although she is an eight-time German champion who has played more Champions League matches than anybody else on the roster, she doesn’t quite compare to Naidzinavicius.

Both Loerper and Wohlbold also offer a totally different playing-style. They are smaller and prefer one-on-one situations using quick first-steps. But when facing a quality defense they will have a tough time creating scoring opportunities. Naidzinavicius, given her height, has been able to use her dangerous slap-shot to achieve success on the scoreboard.

As Frederike Gubernatis did well against Cameroon on Friday, starting as right-back, I can imagine that head coach Michael Biegler will use Nadja Mansson, Emily Bölk (once she gets called) and Xenia Smits along with Loerper and Wohlbold in the attack. But will it be enough to overcome the emotional loss of one of your key players? I fear the absence of Naidzinavicus will have much of an impact.

Coach Biegler, has already repeated over and over again that he doesn’t care about problems, but only about solutions. If he wants to lead this team to the final round in Hamburg, he needs to find new options rather quick. If the squad bows out early after suffering a setback like this, nobody will complain – probably. But an early exit would not only be a nightmare in the short term, but even more so in the long run. And it could be a setback hard to recover from for women’s handball in Germany.