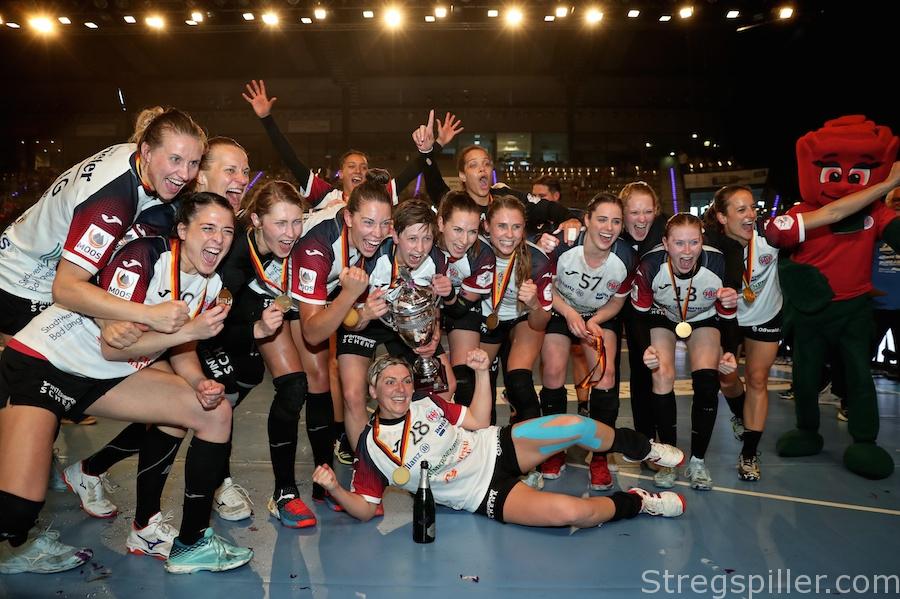 The 2019 Olymp FINAL4 took place in Stuttgart for a second time, in an attempt to permanently establish the event in a region that is the home of several 1st- and 2nd Bundesliga clubs.

For Thueringer HC the final match of the Olymp FINAL4 presented an opportunity to collect their third German cup trophy and avenge the loss of the 2018/19 championship, where Bietigheim took the title based on goal differential only.  Bietigheim’s women would rely on the support of a home crowd in their undertaking to win the title for the first time as they narrowly failed in 2017 and 2018.

“In 2018 we celebrated the inaugural Olymp FINAL4 as a stand-alone event in Stuttgart’s Porsche Arena.  The cornerstone for a lasting and sustainable competition is in place.  That’s our objective: We want to establish the highlight in German Women’s handball permanently.”

For decades the FINAL4 is one of the best offerings in German team sports and Porsche Arena is a worthy home.”

Germany’s two best teams met in a do-or-die game and it showed in the 44th edition of the German cup final.  From the get go 3.569  spectators at Porsche Arena witnessed a bare knuckled handball fight and the referees, Maike Merz and Tanja Schilha, had their worked cut out. In short: The experienced pair struggled as the game progressed.

Thueringer HC seized the initiative early on but neither team was able to pull away, as the lead changed frequently in the first half, where Bietigheim’s  Kim Naidzinavicus (10 goals) almost single handedly kept her team in the game.  Later Naidzinavicius would collect a much deserved award as “Best Player” of the tournament.

After the break, the picture did not change much until midway in the second half, when coach Albertsen’s team established a four goal lead.  Led by Visser and Naidzinavicius, Bietigheim was on the brink of breaking lose and decide the match early on, but a stellar performance of goalkeeper, Jana Krause, and a remarkable fighting spirit kept Thueringer HC in the game.

A thrilling finish was in the works as Naidzinavicius and Visser missed their shots from the penalty spot.  On the other side, German international, Dinah Eckerle, denied Meike Schmelzer an open shot from the line.  As the clock was ticking down and most in the crowd prepared for extra time, it was Emily Boelk who cut it short, scoring on a powerful shot from left back position with 2 seconds to go.  Game over.

Emily Boelk would have been the easy choice, based on her game-winning shot, but Jana Krause in goal laid the foundation for Thueringer’s come-back in the second half of a memorable game, winning her first German cup, late but not too late towards the end of her career as a handball player.

It was a festive atmosphere at Stuttgart’s Porsche Arena, a venue that will host the event for the next two years.  Those 3.569 in attendance witnessed a thrilling handball fight between Thueringer HC and the local team from Bietigheim.  Although, Bietgheim missed the title for a third year in a row, the dramatic match was true advertisement for women’s handball made in Germany.  The organizers could not have wished for a better promotion to a “Must-See” event for every handball fan, near and far.

“We executed our game plan exactly as planned.  It was a great match and it’s OK that Thueringer HC succeeded in the end.  Likewise it would have been OK if we would have won.  It was a game on the highest international level and don’t talk-down women’s handball in Germany – it’s not that bad.  I just want to add one point: Why aren’t the best referees selected for a final match?  It’s really upsetting.”

Bietigheim won the most important title – the German championship – and we won the cup.  Bottom line is the two best teams in Germany met, we played a great season and I am happy and proud of my team, our organization, all the people that help this club to succeed and my coaching staff – fantastic season, thank you all.  Now, I just want to celebrate together with the girls.”