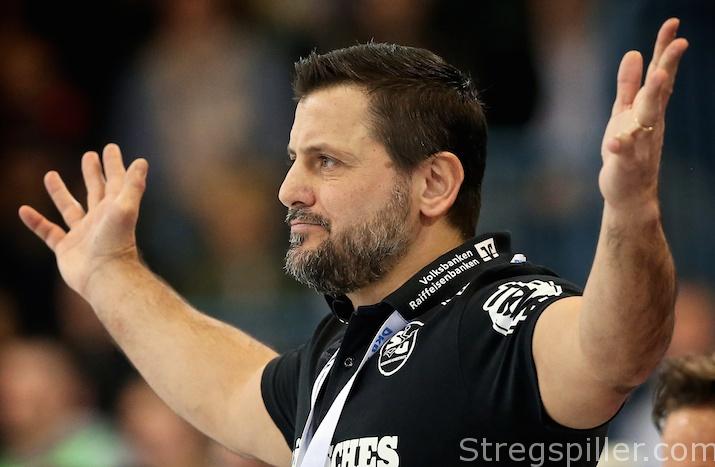 REVIEW – MATCH OF THE WEEK, GROUP A

Even without a sick Mikkel Hansen, Paris Saint-Germain managed to land a win in Flens Arena.  A Kempa trick from Uwe Gensheimer to Nedim Remili decided a match, which could have gone either way.

Flensburg were fourth in the group (11 points), PSG second (16 points) and apart from Mikkel Hansen, PSG were missing Luka Karabatic due to injury.

Flensburg were still without injured Johan Jakobsson and Tobias Karlsson.  It is not always possible to sell all tickets for Flensburg´s Champions League games, but this one had been sold out for weeks.

You have to acknowledge that the winning goal was scored in style.  A Kempa trick in the dying seconds of the game, when Uwe Gensheimer sent a pass across the circle to a high-flying Nedim Remili sealed the deal for the club from the French capital.

It was the culmination point of a breathtaking match, where offense was king all the way to the end.  Flensburg were in the lead for most of the second half, and in the end, it could have gone easily either way.

In Mikkel Hansen´s absence, it was up to Nikola Karabatic and Daniel Narcisse taking turns at playing left-back and playmaker.

The French back-court line functioned rather well in a first half, which were dominated by the offense formations of the two teams.   The two goalkeepers, Mattias Andersson and Thierry Omeyer were not able to make much of a difference.

Still, Andersson did a bit better than Omeyer with a saving percentage of 25, compared to “Titi´s” dismal 10.

The game was equal most of the first half hour, with alternating leads.  Flensburg´s prospects did not improve, when Thomas Mogensen had to leave the court injured shortly after his first game action of the day.

Still, the host was the better team for the last part of the first half as neither side was able to increase the goal differential beyond two.  Lasse Svan “broke the rule” and arranged a three-goal lead for the home team with a minute and a half left to play.

Working conditions for the keepers did not get any better, as the scoring continued at a ferocious pace.  PSG had replaced Omeyer with Gorazd Skof who could  not make much of a difference.

In fact, Flensburg got off to the better start, building four-goal leads several times.  However, a number of missed shots and technical mistakes invited PSG back into the game.

Karabatic and Narcisse worked very hard and it was surprising that coach Zvonimir Serdarusic waited quite a long time before sending William Accambray on the field.  Once a promising shooting-star in French handball – now you hardly ever see him on the court.

In the end, however, it was Karabatic and Narcisse who orchestrated PSG’s comeback.  The French club got back into the lead at 28:27, only to watch Flensburg taking another two-goal advantage with five minutes left on the game clock.

Yet, the experienced French side bounced back one more time, making way for the spectacular finish.

Jesper Nielsen probably played one of his best matches – if not the best since joining the French top team.

In the absence of Luka Karabatic, the Swedish international had an impressive performance as PSG’s only line player. He crowned his efforts with seven goals on eight attempts.

No doubt PSG´s winning goal stood out.  Not only because of its importance, but because it was a bold move in a tense situation.

PSG are still breathing down Barcelona´s neck in the battle for the group win and a direct quarter-final berth.

They may be two points behind Barca, but they only need the Catalans to stumble once before taking over first place.  Their next match, at home against Schaffhausen will not cause Karabatic & Co any trouble.

It looks worse for Flensburg, who are still fourth with 11 points.  Their next assignment includes a road trip to Barcelona.

On Saturday, Wisla Plock virtually qualified for the round of Last 16, winning 28:25 at home against Bjerringbro-Silkeborg.