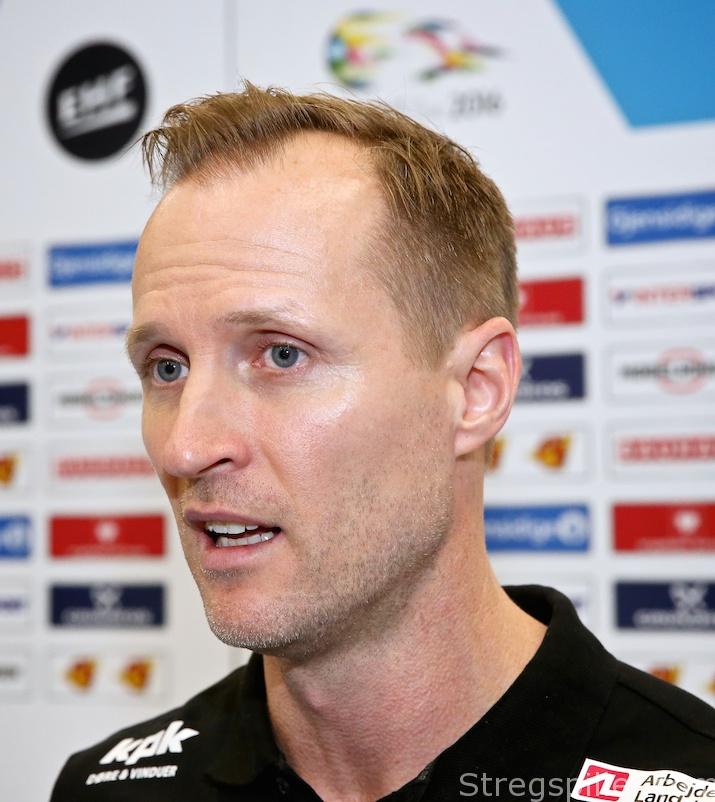 “We have brought innovation to women´s handball”

Denmark´s coach Klavs Bruun Jørgensen finds that his new, aggressive defense has been an innovation to women´s handball, while veteran Louise Spellerberg agrees that it has strengthened the team.

“We have brought innovation to women´s handball with our new defense philosophy.

Klavs Bruun Jørgensen, coach of Denmark´s women national team since last summer is not in doubt about the significance of the new defensive mechanism, he introduced as soon as he took over the job.

“Women´s handball has been way too traditional, and there has been too much fear of trying something new,” says 42-year-old Klavs Bruun Jørgensen, who describes his philosophy as an aggressive 6-0 formation, although it often resembles a 3-2-1 system.

He does not see his own squad as the only team who has dared to try something creative at this European championship.

“A team like the Czechs has also impressed me with their approach.

“I think their coach Jan Basny has incorporated some interesting aspects, especially in the fast break phase and the “fast mid”.

“A coach like Olivier Krumbholz from France, who we are going to play on Sunday, is another innovative coach who is not afraid of experimenting, as far as defense is concerned.

“In general, I think female handball players are capable of adapting much more novel ideas than coaches have been willing to try so far,” finds Klavs Bruun Jørgensen.

“Our new defense is a big part of the reason why we have made it so far in this tournament – further than anyone had expected us to.

“I think there have been many good teams at this European championship, and of course, the competition has been particularly good for us,” says the 34-year-old veteran who has not played much herself.

“Of course, I would have liked to play more than I have.

“It would be silly to say otherwise. In that case, I should not be here in the first place.

“However, I feel I contribute to the team with advice from the bench, and we, the three line players, have a particularly good way of cooperating,” she says, referring to herself as well as Stine Bodholt and Kathrine Heindahl.

Klavs Bruun Jørgensen admits to still being annoyed about Denmark’s 26:22 loss against the Netherlands in the semi-final.

“Annoyed, not disappointed. I am irritated, because the Dutch coach, Helle Thomsen, managed to beat us by playing seven-against-six. We found no weapon against it.

“Before she applied this tactical move, her players had huge problems with our defense, and this was obviously the reason why she chose to make a change.

“I considered playing seven-against-six myself as we were having significant problem in the attack at the beginning of the second half, but I abandoned the idea, as I did not think it would have paid-off in our case.

“We probably would still have been running against that Dutch wall,” says Klavs Bruun Jørgensen before enjoying what his team has actually achieved in Sweden.

“Of course, it is proof that what we have been doing is working in practice,” he says, admitting that he values the Danish achievement as a personal vindication after the severe criticism, which he has been subjected to in Danish media for a long time.

“Of course, I do, and I think my reaction after the match against Romania showed it very clearly,” he says, referring to the fact that he broke out in tears, after Denmark’s 21:17 victory, which earned the Danes a emi-final berth.

Looking forward to playing against Krumbholz

Sunday afternoon, he will probably have forgotten completely about his irritations and semi-final defeat, as a bronze match against France is waiting.

“I particularly like to play against France and Olivier Krumbholz.

“As I said, he is the kind of coach who is never afraid of taking initiative when it comes to defense, and he always finds new ideas and solutions.

“I will have to be very alert and on my toes on Sunday afternoon, as I am going to be up against a coach who is not only extremely experienced, but who also thinks and reacts very fast.

“I am really looking forward to this game,” says Klavs Bruun Jørgensen.