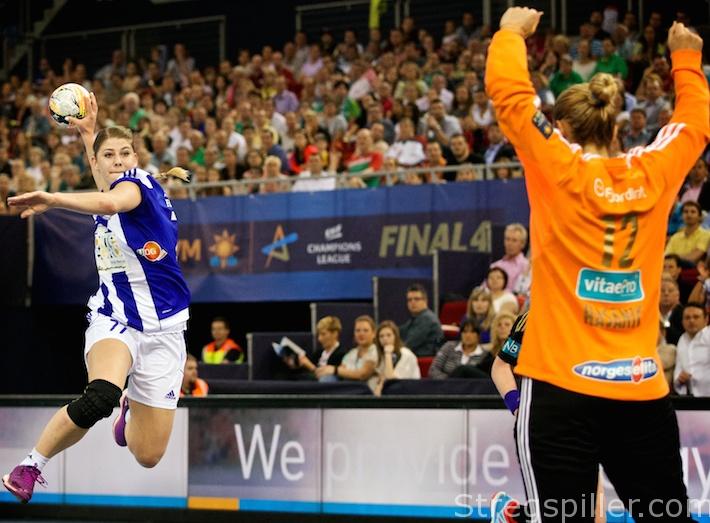 #DELOEHFCL Round of Last 16 Second Leg

As expected, the first leg between these sides was a real scrappy affair, in which Buducnost played out of their skins to win 22:19.

Although taking a three-goal deficit home for the second leg is no nightmare scenario, it played into the narrative of FTC being simply unable to get the job done in knockout rounds. Despite being narrow favourites coming into this tie, their European campaign was in serious danger of ending early once again.

The Hungarian team has the added obstacle of having to turn things around without head coach Gabor Elek, who tested positive for Covid-19 during the week.

A brilliant second half turnaround from Ferencváros gave them a 29:28 win on the night but it was not enough to snatch victory on aggregate and Buducnost were left celebrating a place in the quarter-finals, a feat they have achieved every single season since 2010/11.

Buducnost set out their stall right from the first whistle, playing a 5-1 defence with Nikolina Vukcevic out on top, teasing the FTC back court to come at them. And it worked a treat as FTC’s shooters Bölk and Klujber missed their first six shots in the opening quarter.

A 10 minute barren spell for FTC midway through the first half allowed their guests to take control of the game. Barbara Arenhart was making things look easy with a 50% save rate, while her opposite number Blanka Bíró was unable to make a single save from the nine shots she faced.

Jovanka Radicevic was always going to have an important role to play and she took command with seven first half goals, giving Buducnost a 15:9 half-time lead.

Much like they did in the first leg, FTC started the second half like a house on fire, scoring seven goals in the opening seven minutes, to cut the deficit on the day to three goals.

A time-out by Bojana Popovic didn’t seem to do much and despite the best efforts of Arenhart and Attingré between the posts, the home side made it 21:21  in the 47th minute with an Emily Bölk long-range goal.

FTC continued to ramp up the tempo of the game and looked set to turn things around but they could never quite claw back that first leg deficit. When Angela Malestein missed a chance to draw level on aggregate with two minutes remaining, Allison Pineau went down the other end and finished the game off.

Over both legs and particularly today, FTC failing to wake up in the first half has cost them dearly. With both first half scores combined, Buducnost won 26:16.

Although the Hungarian side picked themselves up in the second half each time, they simply left themselves with too much to do and ecountered a Buducnost team with players and a coach who knew how to manage the clock and kill momentum when necessary.

“I don’t really understand why we didn’t start the game like we did in the second half. We were a bit afraid at the beginning and not as aggressive as we wanted to be in defence.

“They are really strong mentally but usually we are too.  I’m really disappointed to lose this game.”

“Our defence was much tougher in the first half but we allowed them to run a bit more in the second.

“We played with our experience, our hearts and fighting spirit today and that is what won the game for us.”

While FTC must come to terms with another European disappointment and switch their focus to competing for the Hungarian league, Buducnost’s adventure continues in the quarter-finals as they can now start figuring out how they will take the biggest scalp of all, Györi Audi ETO KC.