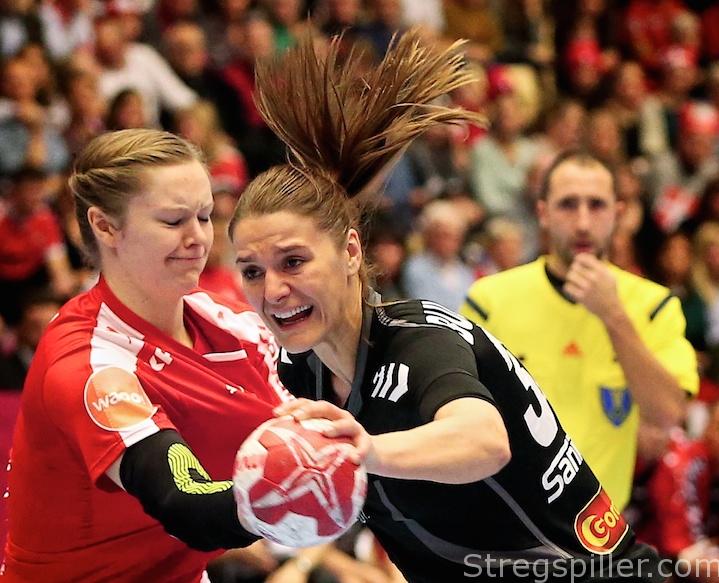 FEATURE – Katarina Bulatovic has developed a tradition for playing well against Norway.  Wednesday evening, she and her Montenegrin teammates are up against the Scandinavian handball powerhouse once again – this time at the quarter-final at the 2015 World Championship in Denmark.
Maybe it’s too much of an exaggeration claiming that Katarina Bulatovic always plays well against Norway.  Fact of the matter is that in two of the most memorable handball matches ever played between Montenegro and Norway, the 31-year-old right-back was the central figure.  In the Olympic final in 2012, she was the top scorer with ten goals, but that was not enough to prevent Norway from taking the gold medal.  After a 26:23 loss, she and her teammates had to settle for silver.
However, Montenegro and Bulatovic got their revenge only four months later.  At the European Championship in Serbia, in December that year, in an epic final at Belgrade’s Kombank arena, the Montenegrins defeated Norway 34:31 after two extra time periods.  This time, Bulatovic scored eight goals.
Wednesday evening, precisely three years after that tremendous final in Belgrade, Montenegro will run into Norway again.

A walk-in-the-park can be difficult

A decisive and trouble free 38:28 victory against Angola, in the eighth-final on Monday, qualified Montenegro for the quarter-finals.  The match itself was kind of a walk-in-the-park, yet difficult in certain ways – at least in Katarina Bulatovic´s opinion.
“It was quite a difficult match to play, as we knew we would beat them. Such games are always difficult in some way.
Of course, Angola has a good team and some good players, but still we knew from the beginning that we would win,” says Katarina Bulatovic who admits that her team had a fairly slow start to this championship.
“Yes, you are right. We did not play well in our first match against Serbia (28:28) but lately we really got our game working and I think it things look very good now.”

Good enough to beat Norway?
“Norway is good team and it is always special to play against them, not the least when you think back at the Olympic final in 2012 and the European Championship final in Serbia a few months later.  So of course, I am looking forward to playing against them once again.”
“However, it is not about me, although I played well against them in those games. It is our whole team that will have to perform at its best if we are going to beat them,” says Bulatovic who currently plays for the pride of Montenegrin women´s handball, Buducnost Podgorica – the club she won the 2012 and 2015 Champions League with.  Before the success with her home team, she also won Europe’s biggest club trophy with Slagelse (Denmark) and Gyor (Hungary).  Counting four Champions League titles and one European championship on her CV already, she is probably dreaming of adding the title of World Champion to her sporting achievements?

“We are still waiting do something big at a World Championship, so this would be a good occasion.”
“So far we are happy having reached the quarter-final, and we hope to book a ticket for the Olympics in Rio next year. This is as far as I am looking right now!” she says.

Norway played their eighth-final this passed Sunday night already, when they defeated a harmless squad from Germany 28:22. Montenegro took the court 24 hours later, translating into one day less of resting.  But Katarina Bulatovic is not worried at all.
“No, we have known all this time that the structure of the tournament was set up like that and it does not really matter to us.”
“After all, the match against Angola was not physically demanding; so we are not really missing that extra rest day.  Now, all we have to do is preparing ourselves as good as possible for the game against Norway – that’s it.”