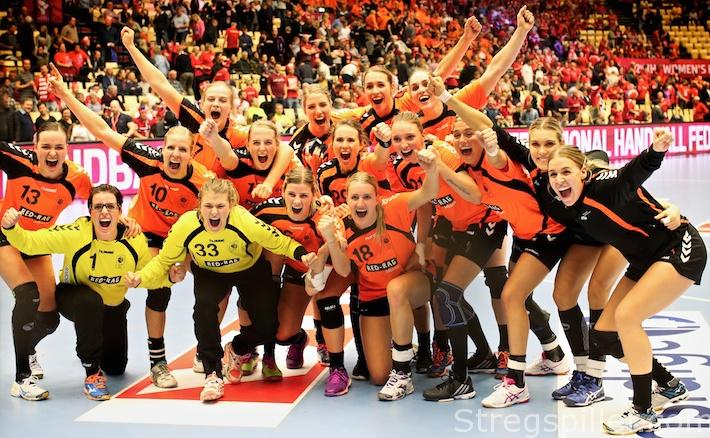 Norway and the Netherlands meet in the final of the 22nd Women´s World Championship after yet another fantastic handball day in Herning!

The Netherlands in a World Championship final. That must be football, right?  Wrong!

The Dutch women´s handball team is ready for their first final ever at a major championship after defeating one of the two surprise teams of the tournament – Poland.  In the other semi-final, nothing was decided until the very last seconds of extra-time when Norway got the better end of Romania.

In my childhood, there was a fast train called The Netherland Express, which never stopped in the town, where I grew up, Kolding.  It was quite an experience to stand on the train station’s platform and watch this long train rush by.  For most of the semi-final, Poland must have felt a bit of the same – standing on the platform and watching a high-speed train run by.  The Netherlands was completely superior.

Even though Poland´s Danish coach Kim Rasmussen did not want to talk about astonishments ahead of the game, his crew was certainly one of the two teams in the competition that fit the bill.  As one journalist put it – if anyone had made a bet on the Netherlands and Poland reaching the semi-finals, he or she would not need to work for the rest of his/her life.  In brief – the statement nailed it.  Yet, the path of the two squads could not have been any more different.  On the one side the undefeated crew of head coach Henk Groener and on the other side, the squad from Poland that eliminated Hungary and Russia in two hard-fought matches, following a sobering preliminary round, when the team lost against the Netherlands 20:31.

Poland scored the first goal of the match – and that was it.  Just like in their first encounter, the Netherlands were completely dominating and built up a big half time lead – 3:1, 5:2 and 11:4.  Poland´s coach Kim Rasmussen tried several offensive formations while defending, but no matter what his players tried, they were not able to contain the dreaded Dutch back-court, led by playmaker Nycke Groot.  Had it not been for Weronika Gawlik in goal – the heroine from the quarter-final against Russia – things would have looked more gloomy at half time then it already did.  The praise, she received from Poland´s assistant coach (former national team goalkeeper Antoni Parecki) was highly deserved.

The Dutch express continued where it left off before the mandatory stop.  The Netherlands was leading as high as 18:9 before Poland enjoyed some easier goals while reducing the deficit.  A brief period of Dutch nervousness towards the end of the match would not change the game anymore.

Nycke Groot obviously relished being back in Central Jutland, where she had successful stints at FC Midtjylland and Team Tvis Holstebro.  The 27-year-old playmaker, now playing for Hungary’s top club Gyor, crowned a stellar performance with five goals on only seven attempts.

The Netherlands is ready for their first final appearance at a major championship – be it a World Championship, European Championship or Olympic games.  No matter how the tournament ending match against Norway will turn out, women handball made in the Netherlands will have a bright future ahead of it.  Finally, Henk Groener and Peter Portengen are reaping the fruits of long and hard development work – congratulations.

Women´s handball is a game with seven players on each side and where Norway (almost) always wins!  The old adage was confirmed once again Friday night, in front of 10,083 witnesses at Jyske Bank Boxen, in Herning.  But what a fight, what intensity and what a handball thriller Norway and Romania had in store.  Even the most critical handball connoisseur could not have asked for more in a handball game.  The match had the setting it deserved in form of a fantastic atmosphere, created by the many thousands of Norwegian fans and a few hundred vociferous Romanian supporters and of course, the two teams playing brilliant handball at the highest level.

Let’s begin with recapping the last minute of extra time: With 57 seconds left, Ida Alstad had given Norway a two goal lead at 34:32 on a successful penalty shot conversion.  12 seconds later, once again it was Romania’s, Adriana Nechita who reduced the deficit from the right-wing.  Thereafter, Norway managed to hold on to the ball until Camilla Herrem removed the last shadow of doubt with five seconds left on the clock.  After 2011, Norway was back into a World Cup final.

Norwegian dominance from the start

For a long time, there was no indication of such a close and nail-biting finish.  Norway was controlling the first half; mainly because of great attacking play and their ability to contain Romania´s star player, Cristina Neagu.  Noteworthy: Most of the time Norway’s defenders managed to control Neagu without resorting to woman-to-woman coverage.

The second half turned out somewhat different.  Romania’s defense tightened up and  Norway was only allowed to score on four occasions within the first 18 minutes of the second period.  Eventually, Romania’s efforts paid off and Neagu & Co. took a two-goal lead (23:21).  But as so many times before, Norway struck back and the rest of the match was a constant exchange of goals with neither squad being able to pull away.  The game ended in a 27:27 draw, just like the quarter-final between Romania and Denmark only days before.

Norway back in control

In over-time, Norway was back in control and when they got up by three (32:29) at the start of the second half of extra-time, the match appeared to be decided.  However, two quick Romanian goals brought new doubts.  But, in the end, Norway remained calm with Skogrand and Herrem putting the match out of reach.  They were the better – or simply put the more composed team.  Now, the high-flying Dutch women are awaiting Norway’s “Gulljentene”, while Romania must realize once again that their latest triumph at a World Championship lies as far back as 1962.

How they Played – Norway

Because of the placements achieved at the European Championship in 2014, when Montenegro finished fourth and France fifth, the two squads were already qualified for the Olympic qualification tournament – only the respective opponents had something at stake.  Neither France nor Montenegro put up much of a fight when Russia and Denmark easily booked their tickets for the Olympic qualification competitions.  There is still something at stake on Sunday morning, when France and Montenegro meet in their match for seventh place, before Denmark and Russia take to the court deciding the fifth spot between them.  The outcomes of the two encounters will have significance with regards to the make-up of the various qualification groups ahead of the Olympic games in Rio 2016.