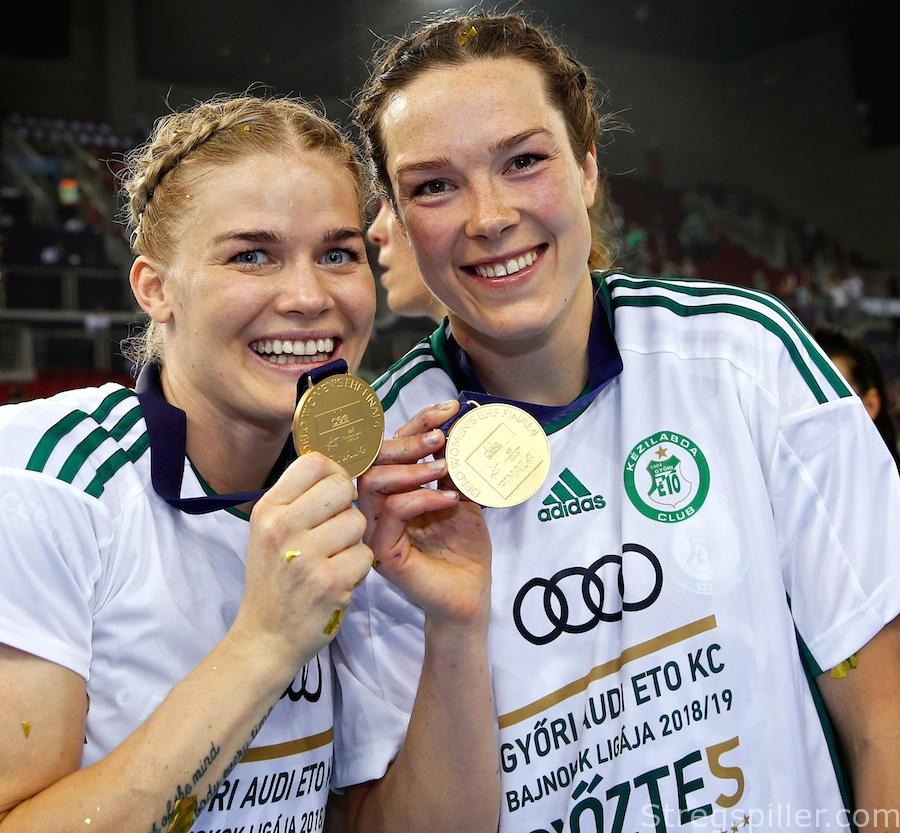 CHAMPIONS LEAGUE FINAL REVIEW – Györi Audi ETO KC took their third straight Champions League title and their fifth within the last six years, but Rostov-Don managed to make them shiver at a bit before the triumph became a reality.

Being in their second FINAL4, Rostov-Don had already done better than in their debut last year, when they finished fourth.

Györ, on the other hand, were in their eighth Champions League final and in their fourth in a row, chasing their third title in succession.

The home advantage along with the quality and depth in their team alone made Györ clear favourites.

Rostov-Don’s chances to offer qualified resistance depended a lot on what condition Anna Vyakhireva’s right ankle was in after the injury she sustained on Saturday.

To Rostov coach Ambros Martin, the match was obviously a special experience, facing the team he coached so successfully for six years.

“Football as a game with 11 players in each team, where the Germans always win!”

These immortal words were said by the legendary former England football international Gary Lineker back in the 90ties when he considered Germany to be too dominant in international football.

These days, we could reframe his statement like this:

The Women’s Handball Champions League is a competition with 16 teams, which Györ always wins in the end!

Sunday, they did it again.

For the third time in a row and for the fifth time in the last six years.

Rostov-Don did manage to make the match exciting, and besides that, the Russian team deserves credit for making it a great handball game.

It still takes two to tango.

Rostov-Don seemed to be able to match Györ physically, and the Russian final debutants got the better start in a high-scoring beginning of the match.

The injured ankle did not seem to bother Anna Vyakhireva much, and she played her part from the start.

The goals virtually in around the ears of the goalkeepers, and for Györ, Amandine Leynaud was far from being as successful as she was in the semi-final.

After less than a quarter of an hour, she was replaced by Kari Aalvik Grimsbø who did considerably better, although Rostov still had the upper hand.

From 11:11, the home team simply scored the last four goals of the half, taking a clear lead with them into the dressing room.

At first, Györ picked up from where they left off just before the break.

A – correct – red card for Nycke Groot less than seven minutes into the half did not seem to bother them either, but what a way for Groot to end her FINAL4 career before going to Odense next season.

Still being four goals ahead with less five minutes left, Györ still seemed to be in full control, but even the greatest can be shaken.

Rostov-Don proved this as they reduced the deficit from four goals at 25:21 to 25:24, as the match went into its last half minute.

Even world stars can panic, and Stine Oftedal seemed to just that, as she fired a more or less hopeless shot with 10 seconds left.

The ball went past the goal, and Rostov got back into possession.

However, they did not have time to make the chance big enough, and it all ended in an unqualified shot from Lois Abbingh.

Györ could celebrate as usual.

It may be a bit too much to say that the Norwegian goalkeeper won the match for Györ, but she certainly played a big part.

As soon as she replaced Amandine Leynaud in goal, she started producing brilliant and crucial saves and could take her part of the credit for Györ finally taking control, after Rostov were the better team for the first quarter of an hour.

Grimsbø’s performance just serves to emphasise the huge depth, Gabor Danyi has at his disposal.

If one star does not perform, there is another star ready?

Of course, the Polish referees Joanna Brehmer and Agnieszka Skowronek did not present a perfect performance.

Such a thing does not exist.

And they made mistakes.

It would have been odd if they did not.

However, they deserve respect for being courageous and not allowing themselves to be intimidated by the fanatic crowd in the Papp Laszlo.

Furthermore, they were sensible enough to call video proof in three situations, in which they were uncertain, including the red card for Nycke Groot.

The Papp Laszlo was it usual Champions League final self.

The many thousand Györ fans supported their team in their usual enthusiastic way, as they are supposed to.

The 200 Rostov Don fans did what they could to spur their heroines on, but they obviously did not have much of a chance against the massive Györ crowd.