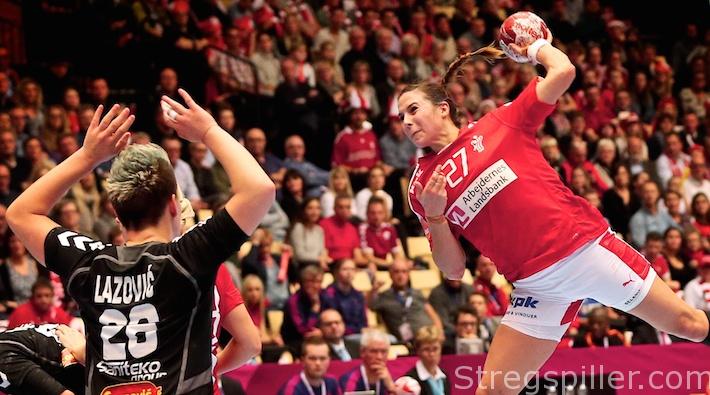 We can beat Vardar!

INTERVIEW – Danish international Louise Burgaard believes that she and her teammates at FC Midtjylland have a fair chance to eliminate Varder and qualify for the FINAL4 of the Women´s Champions League.

Spirit and cohesiveness have brought the Danes this far and it can carry them to Budapest, says the 24-year-old right- back.

“Of course, Vardar is a very good team, but I really think we have a chance defeating them.

“We have gotten this far because of focusing on the tasks in front of us as well as our spirit and being good at sticking together. This can also bring us to the FINAL4!”

The confident words come from Louise Burgaard, right-back at FC Midtjylland. Her team will be meeting HC Vardar Skopje in the quarter-finals of the Women´s Champions League, in April.

Only 24 years old, the hard-shooting left-hander is one of the most experienced players in the team, but a FINAL4 appearance would still be a new experience for her.

Midtjylland were part of the very first FINAL4 in the Hungarian capital in 2014, but that was before Burgaard joined the club.

“Playing a FINAL4 would be a dream come true for me.

“I have been at the men´s FINAL4 in Cologne as a spectator, and I was impressed by how big an event it is. But playing at a FINAL4 myself would be even better,” says Louise Burgaard who missed the main round of the Champions League last season, as she was sidelined with mental problems.

“It is always great fun to play the Champions League, as this is the highest you can get to at the club level, and of course, it is even greater to be part of it again after missing it last year,” says the right-back who can look back on a successful season with her team in all aspects.

“Of course, it means a lot to us considering a tight schedule this spring.

“Another advantage of having won the league already is that we can use the last two matches to adjust some elements of our game, before the Champions League quarter-finals against Vardar and the semi-finals in the Danish play-offs,” she says.

She refuses to reveal exactly what her teams will work on, as this interview will be read in Skopje too.

Full support to the coach now

FC Midtjylland´s success this season may come as a bit of a surprise, considering the turbulences at the start of the season, when head coach Helle Thomsen was sacked and replaced by then assistant coach, Kristian Kristensen.

Soon after, Kristensen´s contract as head coach was extended until the summer of 2018, even though several players were not exactly crazy about him as coach, according to some reports.

“We were good at sticking together and getting through the tumultuous times, and I see it as the reason for our success this season,” says Louise Burgaard who provides a simple “Yes” to the question, if Kristian Kristensen has the full support of the entire squad now.

While Burgaard and the rest of the team are having sweet dreams of a FINAL4 appearance, taking back the Danish championship is another important task at hand, after having lost the title in two, tight final matches against Esbjerg last year.

“Of course, that’s another big goal for us, but it’s really difficult to estimate our chances, I think.

“The league is so tight that I simply have no idea who we may run into in the semi-final, not to speak of the final – and I think it’s great that the league is so evenly balanced and unpredictable,” says Louise Burgaard who may have an even better chance of winning the championship this season as her team will undergo quite radical changes over the summer.

Three right-handed back court players have been signed, so far.

“Vicki – Veronica Kristiansen – will love to read this:

“I am crazy about playing with Norwegians.

“I really like their spirit and approach to the game, in general. So I am definitely not unhappy that we are getting two more Norwegians in our team.

“Apart from that, I have not given much thought to next year.

“For now, I focus on the tasks we have ahead of us for the rest of this season, and that is exiting enough,” explains Louise Burgaard.

Her own contract is valid for the next seasons, and she has not thought about her own future either.

“I am happy that I have time until the summer of 2018 to decide about my future.

“That makes me feel secure.”

Could a foreign career be of interest, as it is to so many Danish top players?

“I have not thought about that either.

“Right now, I am happy where I am,” she states.

At the beginning of this article, I called her a Danish international. But, it is a question if she still is?

It is a fact that she has not appeared in the national team since the World Championship in Denmark, in December 2015.

Most of last season she spent off-court due to mental problems, and during a period in the fall of the current season, she was hampered by injury.

But until now, she has not been part of Klavs Bruun Jørgensen´s national team. At the moment, Denmark’s national team is in France competing in the Golden League tournament, but Louise Burgaard is training at home, in Ikast.

She is a bit evasive when asked about her future in the national team. For instance, is she seeing herself playing at the World Championship in Germany, in December?

“I still want to play in the national team, but I do not want to dream about specific championships.

When I asked her, if she has spoken to national coach Klavs Bruun Jørgensen about her prospects in the national team, she said:

“I do not want to answer this question.

“All I can say is that I am still dreaming of playing in the national team, but for the time being, I focus on my club,” she adds.

However, she admits that the break, that the “international week” gives her and some of her teammates, offers great opportunities to train physically.

“Some of us here back home get a good chance to catch up with some physical training, which is hard to do when you play two matches per week.

“This break is good for us,” says Louise Burgaard.