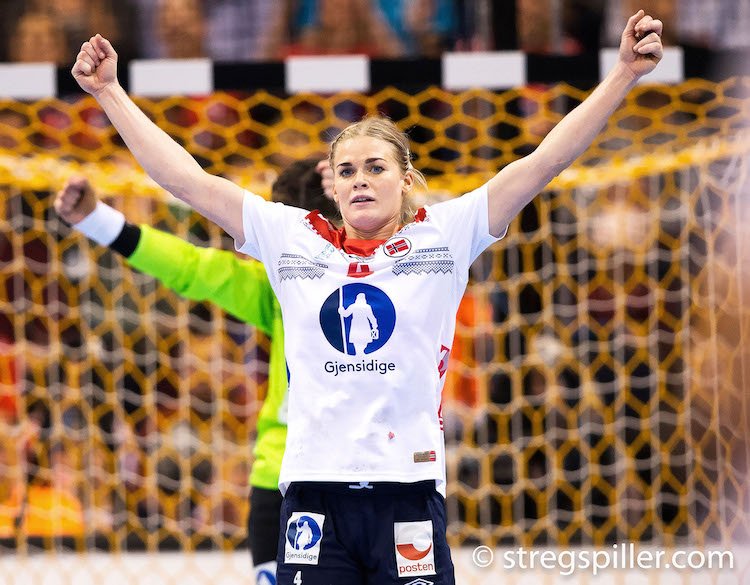 INTERVIEW – Veronica Kristiansen is looking forward to joining Györ in the summer of 2018.  Following the announcement earlier this week, the Hungarian handball powerhouse will have assembled the best female club team in the world.

The Norwegian international and back-to-back European champion is not afraid of the high expectations in her and her new team.  Actually, she is looking forward to the challenges ahead, as she reveals in this exclusive interview with stregspiller.com.

Usually, it is some sort of a sensation when a player signs with a new club shortly after extending the contract with his or her current club for another three years.

In this particular case, it did not come as a big surprise when ruling Women´s Champions League winners, Györ, announced an agreement with Veronika Kristiansen running until 2021, only a couple of months after the Norwegian international had extended her stay in Midtjylland.

But a contract clause allowed Györ (and no other club) buying her out before time.   In a 2017 interview with the well-received handball podcast “Uninformed Handball”, Kristiansen mentioned that “every player dreams of the green jersey of Györ ,” and on Monday of this week, the Hungarians exercised their option.

For a transfer fee ranging between EURO 150,000 to 175,000, the 2017 Champions League winners signed Kristiansen for the upcoming season.

“I was very excited and happy when I first heard that the probably best club in the world wanted me in their team, and I did not need much time to make up my mind.

“I am very much looking forward to become part of such a great team, and I am sure playing and training with some of the best players in the world will lift my game even further,” Veronica Kristiansen tells stregspiller.com.

Half of the Norwegian national team

As goalkeeper, Kari Aalvik Grimsbø, right back, Nora Mørk and playmaker, Stine Bredal Oftedal, are already part of Györ’s team, the addition of Kristiansen and Brattset mean that almost half of Norway’s national team will be playing handball in the Hungarian club from next season onward.

“The fact that there are so many players, who I know already, has certainly made my decision easier.

“I realize that moving to Hungary will feel much more like moving “abroad” than moving from Norway to Denmark. But as I know so many of my future teammates it will make the change much easier for me – no doubt.

“In addition, I have only heard positive things about the club from those (players ed.) who are already there, and everyone seems to be very nice.  I can only look forward to joining them,” says Veronica Kristiansen who is playing her third season with FC Midtjylland, after leaving Glassverket (Norway) in 2015.

Looking at the roster, coach Ambros Martin will have at his disposal after the summer of 2018, it is impossible to not acknowledge Györ as the odds-on favorite to win the Champions League next season – in case they do not succeed this year.

All the hype that followed yesterday’s announcement doesn’t bother Veronica Kristiansen for a second, though.

“I am used to pressure already – at the club- as well as at the national team level – and I am sure all the players in Györ are used to it as well.

“I think we all realize that we will have to reach the FINAL4 to fullfil our own and other people´s expectations, at least.

“When you play at this level, pressure is an every-day companion.  Personally, I am looking forward to it, as it serves as confirmation that people believe in you and that you have given them the right to expect something extraordinary from you.

“In particular, I am looking forward to meeting all the fans in Györ and play for the more than 5,000 enthusiastic spectators who come to each and every home game,” says Veronica Kristiansen who has played 111 internationals games for Norway already.

Want to say “good-bye” with a title

Before starting the Hungarian adventure, however, she wants to end her three years in Midtjylland in style.

“I want to finish winning the Danish championship; nothing less!

“I think we have a good chance of achieving this goal – it would be the perfect way to end my time in a club that has meant so much to me.

“I have really developed a lot during my time in Midtjylland, and generally speaking, I had a great time here.

“This season, I was entrusted with the role of team captain, and helping the team winning the Danish championship again would be a great way to pay back.

“In the Champions League, we also have a lot to play for.

“We still have a quarter-final berth in our own hands. If we win our home games against Nykøbing Falster and Krim, we are in the quarter-final.  Reaching the FINAL4 will probably be something I have to wait for achieving until next year, with Györ.

“Of course, you can always dream of the FINAL4, but it’ll probably be a bit too ambitious of a goal this season,” finds Veronica Kristiansen.