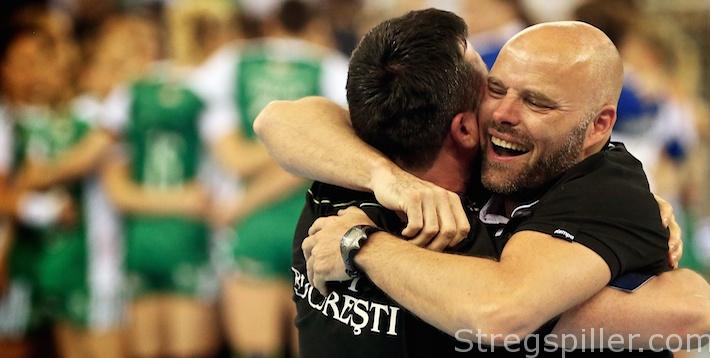 The expectations in Hungary´s new national coach Kim Rasmussen are huge, and justifiably so, considering the Dane´s success with Poland and CSM Bucuresti in recent years.  But, Rasmussen is facing serious problems with a team hit by several injuries.

Success has been clinging to Kim Rasmussen´s name for quite some time now.  First, he raised Poland´s female national team from anonymity to fourth position at two World Championships in a row – and then he made the Romanian underdogs of CSM Bucuresti Champions League winners in their first season ever in Europe’s premier league.

No wonder that expectations are flying high in Hungary, now that he has taken charge of the nation’s women handball team.  Not since winning the bronze medal at the European championship in Serbia in 2012 have Hungary’s women been able to reach the international top.

Now, Hungarians hope that Kim Rasmussen will make their women´s team great again.  Maybe he can, but as he stated in an interview with stregspiller.com, bringing Hungary back to the top of the women´s handball world is a long-term project, and people should not expect wonders – certainly not at EURO’16 in Sweden.

In the meantime, Hungarian handball fans have further reason to adjust their expectations for the upcoming European championship, as their team has been severely hit by injury.

After the test tournament in Romania this past weekend, Rasmussen´s squad lost two of its key playmakers.

The two center-backs from  Ferencvaros, Aniko Kovacsics and Zita Szucsanski both sustained injuries – Kovacsics broke her nose and Szucsanski tore a muscle and both are ruled out for at least the first part of the tournament.

A third playmaker, Gabriella Toth from Gyor, is not yet fit enough following her long injury break to endure the strain of a long and taxing European championship.  And it has been a fact for some time already that left-back, Zsuzsanna Tomori, has still not recovered from the cruciate ligament injury, she sustained at the World Championship a year ago.

All of it leaves Kim Rasmussen with a lot to think about.

Still, Hungary should be strong enough to defeat the Czech Republic, which will be enough for them to move on to the main round.

Furthermore, they may benefit from the fact that Montenegro seem to be far down their form curve, while their chances are less clear against an inconsistent Danish team.

In the main round, things get considerably tougher for Rasmussen´s crew.  Hungary did beat Romania 29:24 in the practice tournament this past weekend, but that was a Romanian team without Cristina Neagu.  And it is hard to see how Hungary will be able to defeat Russia or Norway.

Therefore, a position between number eight and twelve in the final ranking appears to be a realistic objective for Hungary.

Based on her Champions League experience with Gyor, 29-year-old Kiss will be a valuable goalkeeper behind an inexperienced Hungarian defense that has not even played together before the year ending competition.

In several Champions League matches with Gyor, 189 cm tall Kiss has shown her skills at the international level – just what Hungary will need in order to advance at EURO’16.

Those who were beginning to think that 33-year-old Görbicz is a player who’s “over the hill”, have been proven wrong, given her strong performance in Gyor, in the Champions League this season.

With three other playmakers out of the squad, the veteran center-back will have to be at her best level to take her team as far into the tournament as possible.

Injured players like Tomori, Kovacsics and Szucsanski will not only be missed in Hungary’s attack, but even more so in their defense formation.  Such circumstances make the 186 cm tall Szekeres extra valuable.

It will be very much up to the player from Ferencvaros, who turns 29 four days before Hungary´s first match in Sweden, to fortify Hungary’s defense.  And considering the many injuries in the team, we may see her on the other end of the court as well.