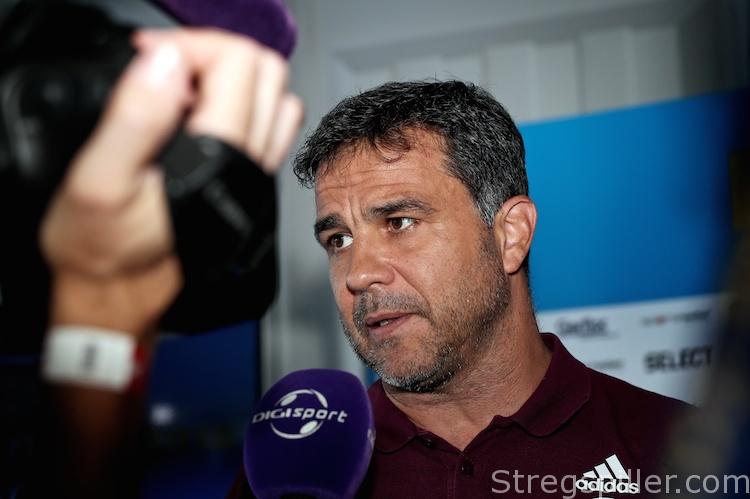 FEATURE – Ambros Martín is number one of stregspiller.com´s ranking of the Top 5 coaches in the Women´s Champions League.

However, the question remains if he can maintain this position when facing new challenges together with Rostov-Don?

The start of the 2018/19 Women´s EHF Champions League is just around the corner.

More precisely, the action starts on Friday evening with CSM Bucuresti receiving FTC from Hungary, in Group D. This also means that it’s time for stregspiller.com´s ranking of the “Top 5” coaches in Europe’s premier club event.

A Spaniard, a Frenchmen, a German, a Slovenian and a Dane have made in into the Top 5

Martín’s outstanding achievements with Györ assure him first place in our coaches ranking.

Yes – he did have the benefit of working with some of the most talented players during his time at the Hungarian handball powerhouse, still, it’s not a given that a star-studded squad will produce the desired results without proper coaching. He passed the test, for sure.

Martin´s analytical and tactical skills are beyond doubt and earn him the top position, but a new challenge is right around the corner.

Can he repeat what he achieved in Györ now that he is in charge of Rostov-Don, again including a gifted squad of the highest quality? One thing for sure – working conditions will be different from what he has been used to.

Despite his young age – he’s only 35 years old – Mayonnade has already been at the helm in Metz for three years and with great success.

Under his careful guidance, Metz became French champion in all of his three seasons at the club. During this period, he established the town in the North Eastern part of France as a “Metropolis” in the world of women´s handball.

Apart from knowing everything there is to know about handball, he is a modern coach who listens to his players and an excellent motivator.

In addition, he led Metz to the Champions League quarter-finals in the previous two years, but he still has to make it to the FINAL4.

Can he take the next step this season and fight off Brest in the battle for the French championship?

“Der Alte Zauberer” – the old magician – is not in charge of a team with a chance to reach the FINAL4, unfortunately.

The financial resources at Thüringer HC are just not sufficient to nourish such dreams.

Still, the 56-year-old Romanian born German, who is also in charge of the Austrian national team, has achieved more with THC during his eight years at the club than most fans had dared to dream about.

His enormous experience, in addition to his tactical and psychological skills, rank him among the “Top 5 coaches” in this Champions League season. So many times he got more out of his team than the collection of individual players would promise on paper – especially last season when he dealt with a squad hampered by injuries.

This year the likes of Emily Boelk and Alicia Stolle, only to name a few of the young and talented players, will greatly benefit in their development from “The Magician”.

The days are long gone when Krim Ljubljana was playing a major role in the Women’s Champions League.

However, what 39-year-old Uros Bregar has achieved is quite impressive. Last season, the team from the Slovenian capital was close to the reaching the quarter-final and despite losing shooting star, Elizabeth Omoregie, it would come as no surprise, if the women coached by Bregar will cause some upsets this season as well.

It’s only natural to harbor big expectations based on the skills of 51-year-old Pytlick when guiding Odense HC through their Champions League maiden season.

Looking back at a 14-year career as Denmark’s national coach and valuable experience gained at the highest level in Vardar Skopje, it should help a great deal when taking the newcomer onto Europe’s biggest handball stage.

He did not succeed in bringing the Danish championship to Odense in 2017/18, but one year later, expect his players to click on more than just one cylinder. Neither him nor his squad will disappoint this season.

While writing these lines, I noticed that the outside temperature in the Romanian capital has dropped to 14 degrees Celsius. Still, no one should be fooled – the hottest seat in all of women’s handball remains to be in Bucarest

At the moment, Swedish, Magnus Johansson occupies it but the question is for how long?

The short answer is that it’ll be entirely dependent on the results and “Bagarn´s” ability to make his star studded roster function in unity and preferably repeat the triumph of 2016, when the club won the Champions League for the first and only time, so far.

Given the Romanian club´s employment history as far as coaches are concerned, there is no doubt that Johansson is well aware of his volatile situation.

When looking at the most exciting transfer in the Women´s Champions League ahead of this season, we have to mention Ambros Martín once again.

The 50-year-old Spaniard´s move from Györ to Rostov-Don really is the most significant coaching change in a long time.

Last season, Rostov-Don reached the Champions League FINAL4 under the guidance of French Frederic Bougeant as head coach and will be interesting to see if Martín can take them back.

Most amount of work – Claus Mogensen

Danish champions Kobenhavn Handball have ambitions to get to the FINAL4 by 2021, at the latest.

Obviously, they will attempt to make a run towards Budapest this season, but with three defeats in the Danish league already and eliminated from the Danish Cup, 45-year-old head coach, Claus Mogensen, has plenty to worry about ahead of his team´s Champions League debut against Rostov-Don.

Reaching the main round will be the absolute minimum of what club owner Kim Mikkelsen can accept as success, and with injured playmaker, Mia Rej, out for quite some time, Mogensen certainly has his work cut out for him.

His job is not as insecure as the one of Magnus Johansson´s at CSM – far from it – but he’s certainly facing the biggest challenge in his career.