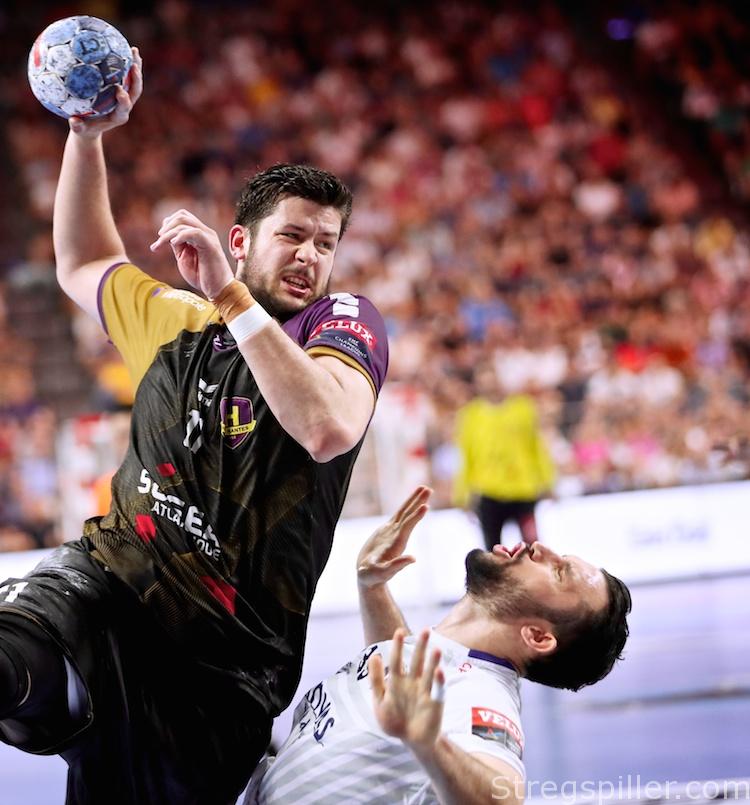 Can Nantes spring a surprise?

stregspiller.com – MATCH OF THE WEEK PREVIEW – After the Women´s Cup in Hungary this past weekend, stregspiller.com is returning to men´s handball, as the Round of Last 16 of the VELUX EHF Champions League already starts on Wednesday night with a match that might very well turn into a thriller.

In all likelihood the former German champion will need a rather clear win in Mannheim to stand a chance in France 10 days later.  The recent injury of Nantes playmaker, Nicolas Claire, has made the undertaking somewhat easier – or not?

Rhein-Neckar Löwen finished fifth in Group A of the group phase, while Nantes ended up fourth in Group B.

In the VELUX EHF Champions League, the two teams have only met twice before. Last season, they were in the same group and both games ended in draws, 26:26 and 30:30.

Both clubs have reached the FINAL4 once before. Nantes attended last year and even reached the final, where they lost 32:27 to Montpellier HB.

Rhein-Neckar Löwen traveled to Cologne in 2011 and finished fourth at the time.

No matter the outcome of this encounter, the winner of the tie will be facing a tough challenge in the quarter-final. Barca Lassa, who were allowed to skip the Round of Last 16 as the winner of Group A, will await.

The two teams currently rank third in their respective domestic leagues. Nantes are trailing five points behind number one, Paris Saint-Germain, while Rhein-Neckar have to make up six, possibly eight points, to get even with Flensburg, the Bundesliga leader.

Rhein-Neckar Löwen earned a hard-fought 27:25 win, on the road, against TBV Lemgo and Nantes surprisingly lost the quarter-final in the French Cup 36:33, in Chambery.

Löwen will be missing the versatile backcourt player, Steffen Fäth and Jesper Nielsen is questionable.

Nantes are hit hard as well as playmaker Nicolas Claire will follow the game from the sidelines because of a foot problem, while left back, Romain Lagarde, is nursing a hamstring injury.

It’s difficult for any goalkeeper around the word to compete with the two Swedish internationals covering the position for Rhein-Neckar Löwen.

Appelgren and Palicka represent world-class and it is extremely rare to see both of them having a bad day.

Obviously, Nantes are missing long-term injured Cyril Dumoulin even though his replacement Bonnefoi has done a great job in his stead.  That won’t be enough in the upcoming match, however.

Groetzki is a bank on right wing by the Löwen, while Radivojevic may not see much court time, but unlike his teammate, the Serb has won the Champions League already once when playing for Flensburg, in 2014.

In any event, Spanish international David Balaguer (Nantes) may be as good as the two of them.

Petersson is still going strong, although the former Icelandic international is not performing on the same level as he once was. However, Lipovina has proven a reliable stand in more and more frequently.

Nantes, on the other side, are turning up with one of the most terrifying group of players in this position. KyrilLazarov (39) defies age and 31-year-old Gurbindo has made an impressive comeback after his injury break. In the unlikely case that both players will have an off-night, Florian Delecroix is ready to take over.

Nikolaj Jacobsen will have no need for 20-year-old Kessler if Andy Schmid plays like he has been all season long.  The Swiss veteran is essential, especially in tight games.

As mentioned before, Nantes are severely handicapped in this position as they are missing Nicolas Claire.

Edson Imare is far from Claire´s level and Rock Feliho is only mentioned because of his enormous qualities in defense. He hardly ever crosses the center line.

With Claire out, RNL enjoy the edge.

Under normal circumstances, this match-up would look like an advantage for the home team.

However, these days are anything but normal at Löwen.  For one, Mads Mensah is lacking form ever since returning from the World Championship and Filip Taleski has not been able to fill in, while Abutovic’s qualities reside on the other end of the court.

In contrast, Nyokas (Nantes) appears to be in great shape and in Lagarde´s absence, expect him to make the most of it.

Rhein-Neckar Löwen are luck to have Sigurdsson back from injury even though Jerry Tollbring has done well in absence of the  experienced Icelander.

Very few left wings in the world compare to Valero Rivera, who will be backed-up by the likes of Emonet and Damatrin.

Still, the combination of Sigurdsson and Tollbring will make the difference.

It will add to Nickolaj Jacobsen´s optimism that Jannick Kohlbacher seems to be in the form of his life and his cooperation with Andy Schmid is close to perfect.

While Guardiola is used almost exclusively on the defensive end, Swedish international Jesper Nielsen is great on both ends of the court if he is fit to play?

In French international, Nicolas Tournat, Nantes’s coach, Thierry Anti, has a quality line player at his disposal, while Prechmalbec and Guillo, in particular, are great defenders.

Still, Kohlbacher – even on his own – puts the hosts in front.

Can any coach compete with a World champion?

In this case, the answer is ‘yes’. More and more people are asking how motivated Nikolaj Jacobsen still is after winning the World Championship and eyeing the end of his engagement at Rhein-Neckar Löwen?

Thierry Anti´s coaching abilities are probably just as fine as Jacobsen´s and it came as a surprise when Nantes announced that they are going to part ways with Anti after next season.  Will the decision create more friction in the meantime?

SAP Arena in Mannheim is not known to reach a boiling point easily, certainly not in the Champions League.  Nantes will be experienced enough to withstand any pressure from the crowd.