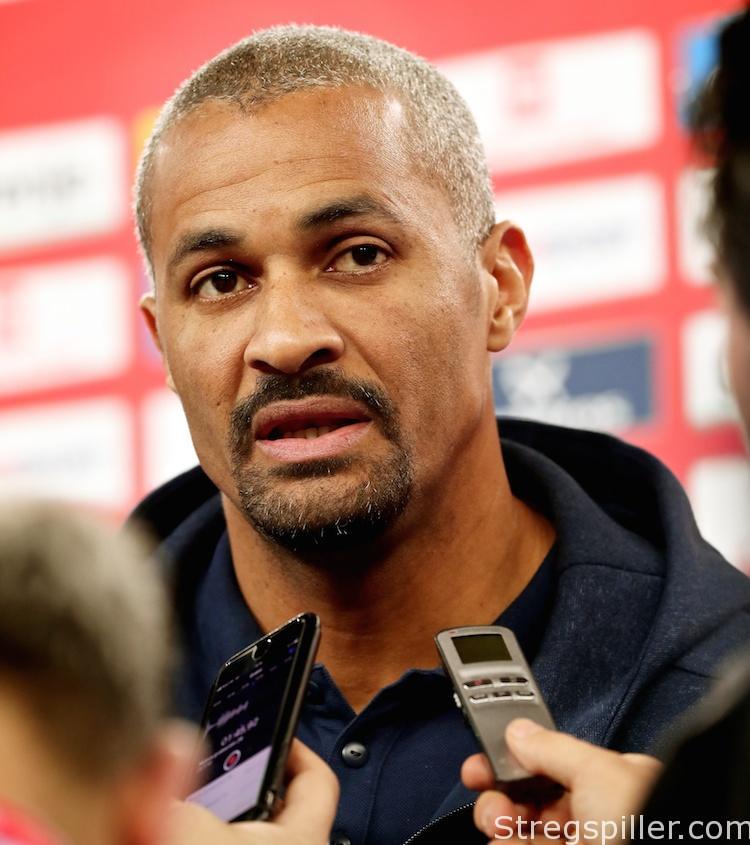 “I can say that I’m in love with my players”

After having qualified France for the semifinals of the 2018 EHF EURO, coach Didier Dinart is a happy man. In his second competition at the helm of the French national handball team, he is a contender for the main title, despite the adjustments he was forced to make.

Daniel Narcisse and Thierry Omeyer retired, several injuries on the left-back position, including Timothey N’Guessan’s – it all necessitated Team France to reinvent itself. Things have worked out perfectly well.

“I can understand that people had some doubts before the competition and we had question marks as well. But I think we, have exceeded expectations,” says the national team coach.

But even if such expectations have been exceeded, it doesn’t mean that Dinart and France want to stop right here and now.  After defeating Croatia in impressive fashion, they appear to be the main favorite for the European title.  Dinart sees things differently.

“We have opened the door, so we can grab a medal. But that doesn’t mean we have achieved it, yet. It would be a huge disappointment not to qualify for the final, so we have prepared for it very carefully,” he says.

Integrating younger players has always been Dinart’s trademark.  Dika Mem, Ludovic Fabregas, Yanis Lenne or Romain Lagarde, all of them wore the national jersey for the first time under his guidance.  And not only does he place them on the bench to learn, he also provides them with the opportunity to take part in the action.

On Wednesday night, for example, he didn’t shy away and left both Mem and Lagarde on the court against Croatia, while the host was pushing hard to come back into the game. In the press stands, French journalists were asking themselves what the coach was doing, but in the end, it was the right choice, everybody agreed.

“We were already qualified, so we didn’t have the pressure to get a result. Games like the one against Croatia are ones that help you grow as a player.

“They lived through an extraordinary moment and they have to keep it in mind, because it will help them in their future,” smiles Dinart, who since the beginning of the championship, has tried hard to keep everyone involved.

And it seems that among the sixteen players part on the French roster, there is not a single one who complains about the way how things are working. Whether they play five or fifty minutes, all players praise the way Dinart works and try their best to earn his trust when they’re on the court.

“Didier always tells us to be ready because he can ask us to play at any given moment. We know that all have a role to play, that there are some important players like Nikola Karabatic or Michaël Guigou – but we can all play our part,” says left-winger Raphaël Caucheteux.

“I can honestly say that I love my players. I’m very lucky to have them, because they’re the ones who put me where I am today.

They are serious and devoted and all of it is just for the sake of the team,” smiles Dinart.

Against Spain unity will be – once again – one of France’s core assets.  In a game where all players know each other so well, there’ll be only a small window of opportunity to spring a surprise. But Dinart is confident his men can take the final step.

“At the moment, our confidence level is very high, but playing such a game is never easy. There is an emotional factor that we have to take into consideration. But it would be too sad to go back home without a medal » concludes Dinart.