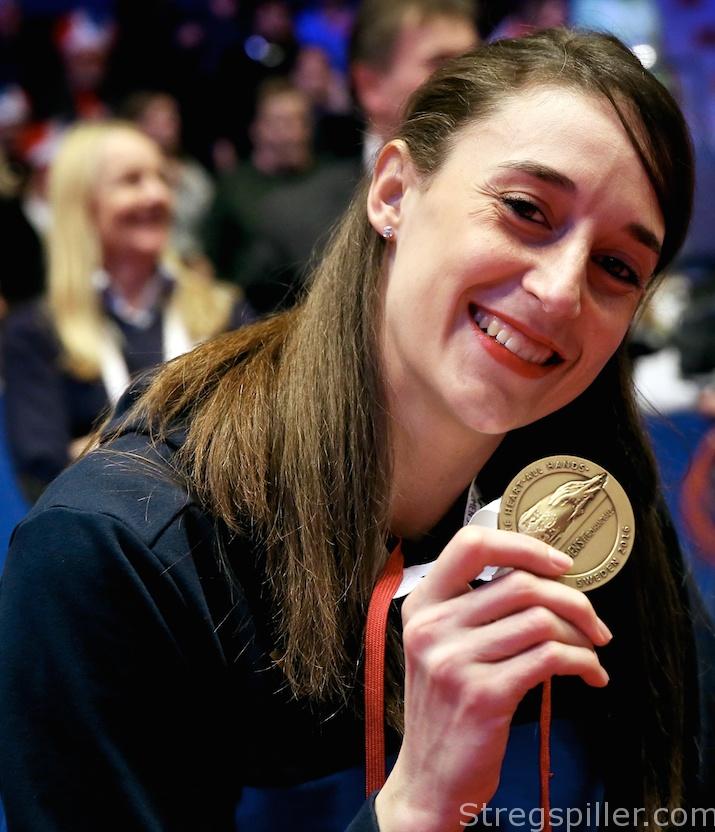 At age 32, Camille Ayglon-Saurina is one of the most experienced players on the French national handball team. And even though she’s almost seen it all by now, she has yet to win a major title with France. The next opportunity presenting itself is the World Championship in Germany, beginning at the end of this week. And if France doesn’t succeed this time around, there’ll be another chance next year at EURO 2018 on home soil.

Camille – the upcoming World Cup could have been a competition where France would not play a major role. But it seems like we were wrong…

CAS :  It seems so, yes. Allison Pineau coming back from injury changes a lot of things, and even if we are missing Laura Glauser, it looks like we’ll have better chances, now.  We would have been able to compete without Allison anyway, but for sure, her come-back changes a lot of things – all the major players will be giving their best, with EURO 2018, at home, in sight.

Having won two medals in the last two competitions, do you feel this French team has reached its potential ?

CAS :  Many of the core players on the national team have been there for a long time.  In the past, it felt like we had the potential to be on the podium in major tournaments.  But competition got stronger as well – what’s changed is that at the Olympics and EURO 2016, we were able to perform in the crucial moments of the game.  Now, only a title is missing.  Of course, winning any medal in these competitions is no an easy thing but it provides you with a nice taste and makes you want to reach even higher.

What do you think France was missing in the last finals and/or semi-finals?

CAS :  In the Olympics, the opponent was too strong and we missed some physical freshness as well.  We used up all our energy in the previous games.  And last year, we didn’t make it to the final when we lost against Norway.  I had the impression that they (Norway ed.) were beginning to lose conviction in their strength, but in the end, things didn’t go our way. We still have some kind of bitter taste in our mouth; we wanted more.  EURO 2016 was our first international bronze medal after winning silver a couple of times.  Let’s say it this way – we’d like to win some day. We do have the capacity to win gold in the upcoming competitions.  But then again, any number of teams are strong enough to compete for a medal or go back home empty handed.

Talking about the World Cup, what do you think about your group?  You’ll be playing successive games against Spain and Romania at the end of the group phase…

CAS :  Maybe it’s not the best thing that we play against the better teams one after the other.  If we could have switched the match against Paraguay for Spain, that would have been ideal.  Nevertheless, Romania and Spain appear to be among the best teams in the group but they have less of a bench compared with us.  So, playing them late in the group phase might be a advantage.  You can’t overlook Angola either because in the Olympics these girls showed that they can perform and they have made a lot of progress as of late.  Slovenia, will miss some key players, but you’ll have to take them serious as well.  I just hope we won’t be “Diesel-Like”, because if we start slow, we might lose against one of the aforementioned teams.  We have to give it all from the beginning.

Does the fact that you’re playing in Romania give you some kind of advantage?

CAS :  When practicing daily with three of them, especially Cristina Neagu, maybe you can decode her a bit better.  But I’m not the only one, Allison (Pineau ed.) and Amandine (Leynaud ed.) played with her in Valcea too. Maybe we have a little bit of an advantage knowing her moves, but even though she’s the best player in the world, she has weaknesses as well.  Some things she likes to do, other things she doesn’t and I’ll try to work with that.

CAS :  Of course it is.  I think it’s the reason that some of us are still here.  After the Olympics we looked at each other and asked ourselves : “Now what?”.   The European championship on home soil is the clear objective for all of us.  I might stop thereafter, and some others might call it a day as well.  So – yes – you can call it (EURO 2018 ed.) a goal.  In 2007, I played the World championship at home and I want to experience this feeling again and maybe go out afterwards.  But the best way to prepare for it is to take the World Championship in Germany – very seriously.