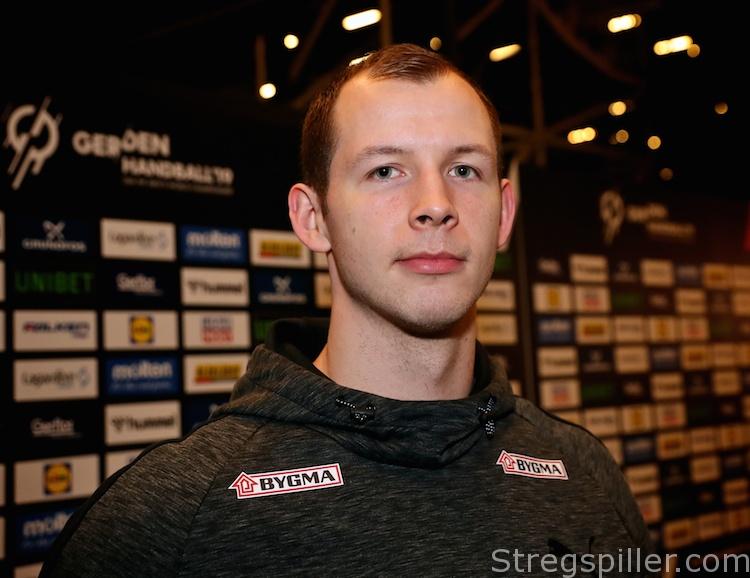 INTERVIEW – René Toft Hansen is out of the 2019 World Championship after suffering a groin injury in last night’s match against Norway.  The misfortune of Denmark’s veteran line player, presents a huge opportunity and challenge for Simon Hald.

In this exclusive interview with stregspiller.com, Hald talks about Denmark’s upcoming opponents and his successful transfer from Aalborg to Flensburg.

Denmark has to deal with yet another injury after the exit of Rene Toft Hansen in the last game of the preliminary round, at World Cup ’19.

In Group C’s group final against Norway, the defense specialist sustained a groin injury, only 13 minutes into the match.  And, on Friday morning, it became clear that this tournament is over for him.

In his absence, Simon Hald and Anders Zachariassen will have to take on extra responsibilties, especially if René Toft´s brother Henrik does not get fit in time.

For Hald, the match against the Norwegians went particularly well, especially on the defensive end, with an A+ performance  alongside Henrik Møllgaard.

Understandably, he is quite satisfied as stregspiller.com met him the morning after Denmark’s victory.

“I felt it was a really good match for our entire team.

“From the start, we performed well as we approached the game were very concentrated. The support from the crowd made us even better, I think.  Even though we suffered a bad period, where we made too many mistakes, while Norway scored a few too many goals. Overall, we did really well,” says the 203 cm tall and 114 kg heavy line player.

Apart from carrying his regular workload in defense, he also spends significant time in the attack, whenever Denmark played with two line players, especially when playing 7-against-6, towards the end of the match.

“Our 7-against-6 tactic did not function all that well, but our regular formation did. I also think it worked well with Mads Mensah on the  right back position.  Norway had significant issues solving the problems we presented them with on that side of the court.  It also explains why Mikkel Hansen got to so many great scoring opportunities.

“We talked about finding the right level in our defense formation against Sagosen and  Gøren Johannessen, who is particularly strong going one-on-one. I think we did a good job in helping each other, except for the last phase of the match,” says Simon Hald who benefited from knowing the moves of the three Norwegian players.

In Aalborg – his former club – he spent time together with Sagosen, in Flensburg, Johannessen is his current teammate, and in the Danish league he squared off with Myrhol on more than one occasion.

“When you know players that well, you do develop a particular knowledge of their strengths and weaknesses.

“The three of them are usually very good in any game, but I think we covered them well,” finds Simon Hald, who enjoys playing next to veteran Henrik Møllgaard, in Denmark’s central defense.

“He always stays calm – even in tough and the most heated situation – he never panics. Henrik always keeps a cool head no matter what, and that’s extremely helpful for younger players like me, for instance.”

On Saturday, in their first main round match, Simon Hald and his Danish teammates will be up against Hungary, where Hald will meet one of the world´s best – and biggest – line players, Bence Banhidi from Pick Szeged.

Hald is well aware of the next task,.

“He is an insanely good line player!

“It’s difficult to come up with a list of line players that possess the physically strength as he does.  So, we will have to work very hard to deny him the ball.

“Taking him out of the game will be one of the keys to succeed against Hungary.  Even more so now, as they have to deal with several injuries in their backcourt line.

“In general, this match will be physically demanding and it will be important that we run a lot, as we have a deeper squad and we should make the most of it,” explains Simon Hald.

Hald’s own handball career took a turn as well. Last summer, he not only left his home town, Aalborg, but his club, Aalborg Håndbold, as well, to join SG Flensburg-Handewitt – the 2018 German champion.

“So far, it has been a good change for me. In Aalborg, I was extremely happy and I could have stayed and continued playing there for the rest of my career, but the time was right for trying something new.  I am ambitious and when I received the offer from Flensburg, I did not have think twice,” says Simon Hald ,who is just as surprised as many others of Flensburg’s unbeaten record in the 2018/19 Bundesliga season, considering the many new players that arrived over the summer.

“I certainly didn’t expect us to perform as well as we did and I think most other people were thinking the same, given all the new and inexperienced arrivals in the team.

“Thus far, we’ve done well and succeeded expectations, while winning several matches, where we didn’t reach our top level but did have the necessary luck.

“Still, we are a long way from winning the German championship again, but so far, we have done well and we can be proud of it.

Off days in the Champions League

Unlike the Bundesliga, Flensburg have not impressed in the 2018/19 Champions League season.

The club from the north of Germany is currently in third place, in Group B, with only 10 points and far behind the top teams of Paris St. Germain and Szeged.

Time and again, it has been said that German teams prioritize the domestic league over the Champions League, but Simon Hald is not accepting the claim.

“We have been annoyed by losing games that we shouldn’t have.  For example, a defeat like the one at home, against Zagreb, (31:29, ed.) hurt our self-confidence quite a bit.

“However, we recovered well in the last few matches during the fall and we are well on our way to the knockout phase.

“The teams in the other group are so strong, we will meet a world class squad no matter where we’ll end up.  In any event, it’s way too early to even dream of the Lanxess Arena, in Cologne, or a FINAL4 appearance, in June.

“That’s far down the road – let’s see how we perform and if we can get there,” concludes Simon Hald before Denmark’s next practice session in preparation for the next World Cup game, against Hungary.