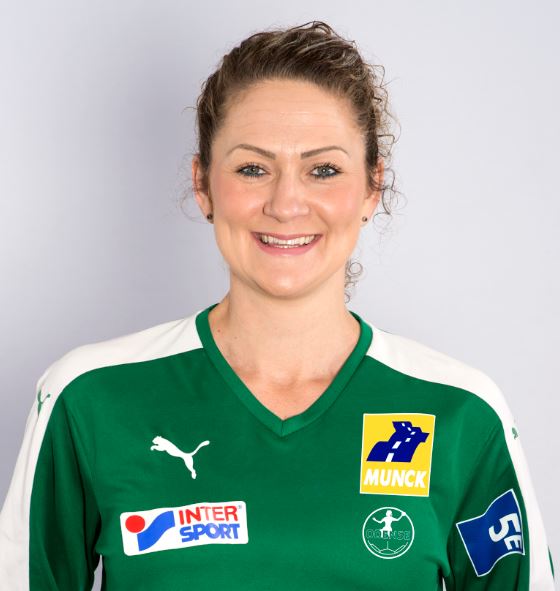 The 38-year-old Brazilian goalkeeper Chana Masson has announced her retirement, effective as of the end of the current season. Stregspiller.com caught up with her as she gets ready for a new phase in her life, one that will certainly not be far from a handball court.

No one could have suspected way back then that 11-year-old Chana Masson would become such a successful handball player, a rather unknown sport in Brazil.  No one but her.  The 4-time Olympic athlete has always been a dreamer and believer.

She took up the sport in her hometown of Capinzal following in the footsteps of her older sister and her cousins, and never let go ever since.  After 21 years as professional, and having won titles in every country she’s played, she decided to put a halt to her career and she’s doing it just the way she wanted to.

CM:  I have always thought that I wanted to retire at a moment in my career where I felt like I could still compete at the highest level.  I didn’t want it to happen at a time when I realize that I can no longer play or when people really see that I’m not living up to the expectations”, confessed the Odense HC goalkeeper adding: “It is also related to the fact that I miss my family a lot, it’s a decision I’ve made together with my husband.  We’re both Brazilian and we think that it’s about time to go back to our country, I’m also planning to become a mother.  I have so many memories and I was able to reach the top in this sport, so I think the timing is ideal.

You currently compete in one of the most competitive leagues in the world – Denmark’s “Primo Tours Ligaen” – has this decision made it easier or harder to keep your focus?

CM: To be honest, it hasn’t hit me yet!  I feel like I will only realize it once I have everything packed up and ready to go back home. I’m still very focused and I still have the desire and the aim to help my team reach the playoffs, so nothing’s changed so far.

What do you think you’ll miss the most when considering the lifestyle of a professional handball player?

CM: I think I’ll miss the adrenaline when you step on the court, watching matches from a player’s point of view, the pressure etc. And I will most definitely miss the every day practice routine with my teammates.

Jan Pytlick said that your retirement was not only bad news for Odense, but for Danish handball as well. What’s your reaction when you hear such statements?

CM: I am super humbled and honored by his words.  He’s such a well-known personality in handball, a very good and experienced coach with such an impressive CV.  This means a lot to me and it makes me proud as an individual and as an athlete. I’m very happy for having had the chance to work with him and hear these words from him.  I’m glad to know that the doors are still open for me wherever I went.  His words definitely make me very happy.

At age 20 Chana took a chance and followed her dreams, all the way to Spain, where she began her international career.  A Spanish coach had seen her in the World Championship in Norway/Denmark in 1999 and, despite the fact that Brazilian handball was not at all popular at the time, he decided to bet on her.

You were the first Brazilian to play in Europe – what was it like to embark on the adventure in Spain?

CM:  I’ll be very honest – it was very difficult.  I arrived with this idea in my head that I really wanted to be in Europe to play the best handball, but I had no clue as to where I was and what handball was like over there.  When I landed, I only spoke Portuguese and I faced serious preconceptions as there was not much knowledge about Brazilian handball.  So everyone was kind of shocked to see a Brazilian player in such a strong league as the Spanish, which was one of the best in Europe and the world.  I faced many hurdles, in order to prove that I was worthy, while starting from scratch in a new environment.  And I’m certain that this experience – the struggle – made me stronger, and I realize that I continue to experience it – even now.  I’m continuously trying to prove what I’m capable of.  It’s the biggest obstacle a foreigner has to overcome.

When you first arrived in Europe, did you know any players or had any idols that you looked up to?

CM:  When I came to Europe I didn’t know many players.  I had only played in one World Championship and that’s when I started to get to know some of them.  From that very moment until now, I’ve been a fan of Cecile Leganger.  I had the chance to watch her play in the Danish league and with her national team, and I even had the opportunity to play against her.  I think she’s the best goalkeeper in the world by far.

You’ve been in Europe for 17 years now, what do you think of the performances of the Brazilian ‘squad’ in the different leagues? Did you ever expect this to happen a decade ago?

CM:  I consider myself a dreamer and I’ve been praising Brazilian handball for a long time.  I’ve always believed in all of us and I still do.  I think that all the Brazilian players who are now playing in Europe have a key role in their respective teams – they’re all highly regarded, and this is definitely because of the great job we’ve all done together.  And I can tell you – I saw it coming, I knew this was going to happen eventually, that Brazilian handball will show an improvement.  We were only lacking experience, a quality that was acquired once the players started to compete in Europe.

Becoming champion in a European league or a European tournament is not an easy task, let alone doing it in three different countries.  But the goalkeeper born in Santa Catarina has accumulated 12 different titles during her time on the “old continent”, including domestic leagues and cups and even 2 EHF Cups and a Cup Winner’s Cup.  All of them were special, however there’s one that she holds dearest.

CM:  I have to say that the most important one was my first title in the Danish league with Randers because I consider it being the best league in the world. We were a team that was not one of the obvious candidates, but we worked really hard for four years with the same coach and almost the same players. So when victory came it was really exciting. I was even awarded “Best Goalkeeper” of the season, so there were two important things that came together.

When it comes to the national team, Chana gets emotional.  Representing Brazil has always been a matter of great pride and responsibility for her.  Taking part in 4 Olympic Games (Sydney 2000, Athens 2004, Beijing 2008, London 2012) is not a given. Neither is becoming Pan American champíon 4 times in a row.  But things have not always looked good for the South Americans.

You were part of a generation that went to World Championships losing almost every match, and then became part of the transition, the team that is now respected worldwide, how did you experience this phase?

CM:  When I think about it now, it’s fun to remember the times when we lost every game and it was difficult for us to compete with the rest; but even then we all thought positively.  As I said before, I’m a dreamer and a fighter and I always believed in us.  It was a very slow transition, a step-by-step kind of thing.  And when we finally started to win some games, being on the court was simply thrilling.  Being part of that transition was a real privilege.

What’s the moment you cherish the most with the “Verdeamarela”?

CM:  Talking about the national team still moves me and I get very emotional even today.  I have always fought to be in the national team and my last fight was to be in the Olympic Games in Rio.  Every time, I had the privilege of wearing that shirt it was special.  I cannot compare the feeling to any other.  If I do have to mention a special moment, it has to be the first Olympic qualification after winning the Pan American Games in Winnipeg, 1999.  Individually – the 2011 World Championship in Brazil when I was chosen “Best Goalkeeper” of the tournament.  That was definitely the most stunning and mind blowing moment of my career.

Do you think that the only way for Brazil to continue with this constant evolution is to go and play in Europe?

CM:  Sadly, yes. I  think that despite the fact that we have plenty of talented, good players and coaches, we lack competition, which is what really makes you evolve and improve.

Life for Chana will continue in her homeland, Brazil, where she plans to coach a club’s team and where she dreams of being able to help the national team as well, if there is a chance.

CM:  The main reason why we’re going back to Brazil is because I want to be close to my family and to start one of my own.  At the age of 38, time is ticking and I really wish to become a mother.  I don’t think I’ll ever be far from handball and so I hope that in the short term I can become a coach.  I have a support team in Brazil that takes care and that is helping me with some offers I’ve received to coordinate a project and become a coach.  But there’s nothing definite yet, and of course I’ll be there with my arms wide open if the national team reaches out to me.

You’ve mentioned how much of a dreamer you are, which of those dreams you’ve had came true and which are the ones you’re still chasing?

CM:  I am a dreamer indeed!  I think that it has been a bit crazy for a girl that came out of an inner city in Brazil to get so far, in a sport that was not popular at home.  But I always fought for my dreams and never gave up.  I believe that playing handball in Europe was one of the dreams that came true.  Wherever, I’ve played I’ve always had this goal of becoming the best goalkeeper in the team, in the league, and for Brazil, and I’ve achieved all of that.  I’ve made it into some big teams but one of the things I could not achieve was winning the Champions League.  I had the chance to join a team that had the conditions to become European champions, but for other reasons that made sense to me at the time, it didn’t happen.  With the national team, I would’ve loved to win a medal in a World Championship or in the Olympics – I was not far from it, but unfortunately it didn’t happen either.  But as I said – I never give up and I may not have done it as a player, but now my dream is to do it as a coach.  Whether it’s a Champions League-, a World Championship- or an Olympic medal – this is my dream now.
Chana continues to dream and who dares to predict that her dreams can’t come true?