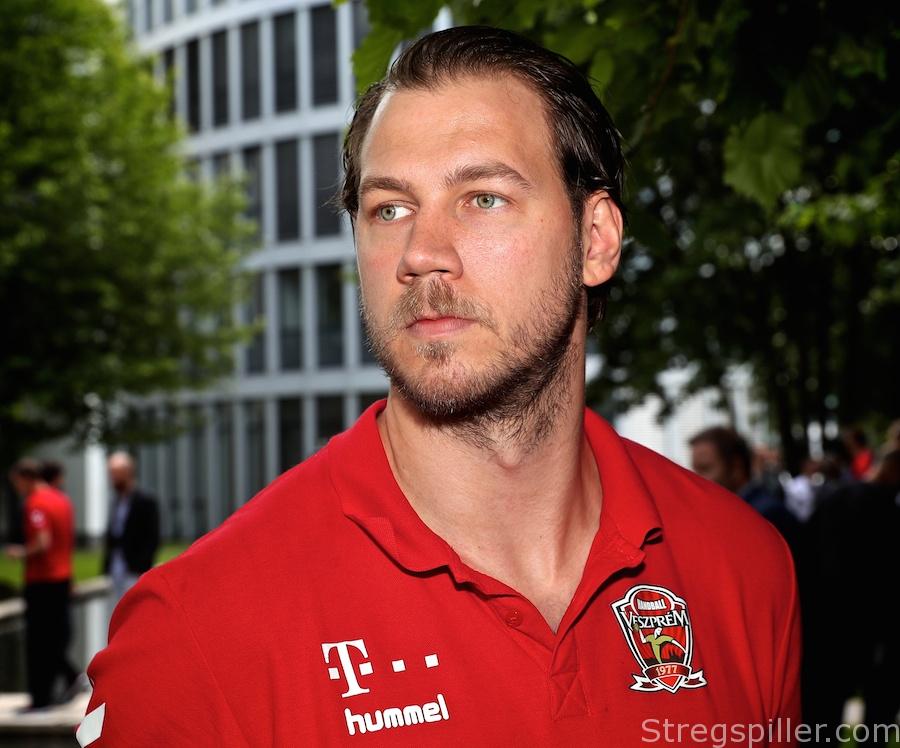 “Change of coach has meant the world to us”

INTERVIEW – Veszprém’s Swedish line player Andreas Nilsson makes no secret of his opinion that the change of coach back in the autumn is the main reason why the Hungarian top team is back at the VELUX EHF FINAL4.

He also gives new coach David Davis the honour for his own great season so far.

“It is certainly good to be here again. I haven’t been here for two years and did I miss it last year.”

Andreas Nilsson leaves no one in doubt that he is happy to be back at the FINAL4 with Veszprém.

Last season’s elimination by Danish underdogs Skjern in the Round of  Last 16 is not something they like to talk about in the Hungarian town.

But Nilsson is not lingering in the past and leaves no doubt about his reasoning behind Veszprém’s return to Cologne.

“We have returned to our former playing system and everyone felt more comfortable with that Spanish system.

“I simply think that that concept suits our team better than the system we used to play under Ljubomir Vranjes.

“Furthermore, we have got a new and better mentality in the team, and we also work a bit harder, so these things together have brought us back to Cologne,” the 29-year-old Swedish international tells stregspiller.com.

“In general, there is no doubt that the change of coach has meant a lot.

“David Davis brought us new spirit at a time when we had lost quite a lot of matches.

“He came with some new things and new energy, and this soon made things better,” finds Nilsson who also gives Davis a big part of the honour for his own fine season so far.

“His system and ideas suit me very well.

“Therefore, I can safely say that the change of coach has been of great importance to me and it has meant the world to us all,” he says.

He is also willing to admit, however, that an improving backcourt line in Veszprém has contributed to making his life on the line easier.

In particular, the presence of the two world class playmakers Mate Lekai and Kentin Mahé played a big part.

“Among other things, our system requires the type of backcourt players who can play with the line player and make good use of him.

“In that respect, they are doing extremely well and it is obvious that the system also suits them fine.

“It is basically what we used to do before, so it has been easy for the players to adapt to it again and we have all welcomed it. As you can see, it has delivered results.

That Spanish system of Veszprém is going to be tested once more on Saturday when PGE Vive Kielce are the opponents in the semi-final.

Not many people, if any, have forgotten how Veszprém lost a nine-goal lead against Kielce in the 2016 final, before losing 39:38 in the penalty shootout.

“We must have let go of that match by now, I think.

“Of course, it was a bitter defeat back then, but we really do not think about that game now.

“We have two wins against them this season and we actually put more into those wins than into what happened three years ago.

“We prefer to think positively and to believe that we can beat them again.”

Goalkeepers and defence will decide

He also had the recipe for success in the semi-final.

“Good goalkeeping and solid defending will be what it takes to get the win.

“Those factors should hopefully give us some fast breaks and the so-called easy goals, and that way we will be well on our way to winning the match,” finds Nilsson who does not want to think about the possible final yet.

“Of course, we want very much to be in that final, but I honestly do not think much about it.

“The difficult part is getting there, so that is where my thoughts are.

“Actually, you do not think much about the final, when you are playing the semi-final, and therefore, it really does not matter to me right now, whether it will be Barca or Vardar in the final,” finishes Andreas Nilsson.