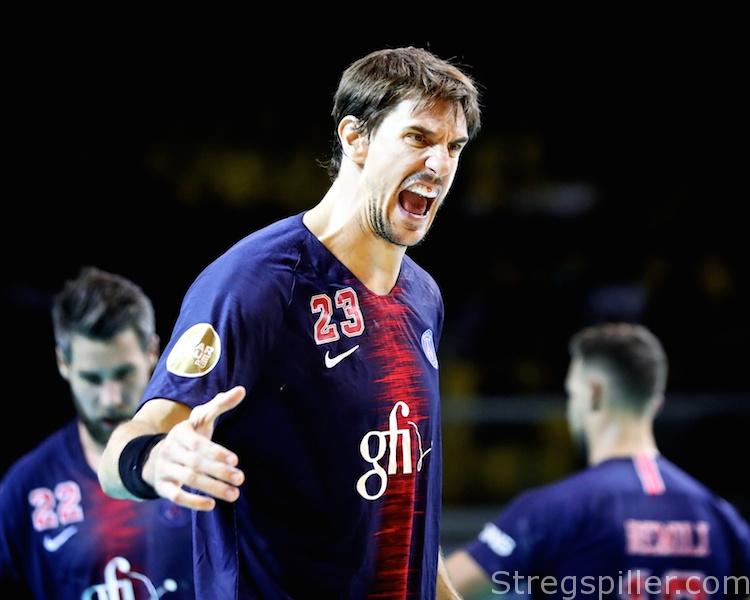 stregspiller.com – MATCH OF THE WEEK PREVIEW – It is the ultimate clash of titans, when PSG and Pick Szeged meet in Group B, on Sunday.

With five rounds into the competition, they are the only two teams that have not lost a single point.  A fact that is about to change when the teams meet in the French capital late, Sunday afternoon.

Do the Hungarian champions stand a chance to remain undefeated, away, against the star studded crew of PSG?

Spanish international, Rodrigo Corrales, has been taking over most of the work load from handball legend Omeyer, but together, the two of them still form a fantastic shot-stopping duo.

Szeged’s goalkeepers, including Alilovic – he quit the national team – and current international, Sego, have also performed well, so far this season.  The two of them explain the team´s success thus far, still the French/Spanish combination provide the edge for PSG.

Abalo has returned from injury and it showed in France´s EURO qualifiers last week.  During his absence Kounkoud has been filling the void on the club level – successfully as I may add. Having both wing players at his disposal, head coach Raul Gonzalez will have his choices.

On the other side, Slovenian, Mario Sostaric, has done well for Szeged, but PSG enjoys a clear advantage.

Remili is a given and his qualities are undisputable, but in Croatia´s recent EURO qualifiers, Stepancic also showed that he has not lost his touch.

Szeged’s experienced Hungarian/Spanish combo is certainly one of the better right back duos in the VELUX EHF Champions League, but they do not reach the level of Remili and Stepancic.

Here PSG are really hurt as Nikola Karabatic is injured.

Sander Sagosen has stepped up, of course, but the Norwegian is all by himself, unless Gonzalez wants to try Kim Ekdahl du Rietz covering the position – if du Rietz is fit, of course.  He had to sit out in Sweden´s recent internationals, in the newly established ECU, a format inviting nations that are directly qualified for the 2020 European championship.

No matter how Gonzales will go about it, his players will face formidable opposition.

Slovenian international, DeanBombac, is one of the most creative and intelligent playmaker in all of handball, and his Spanish colleague, Joan Canellas, has all the experience needed in a close match.

Taking it all in, Szeged enjoys a narrow advantage.

If du Rietz is not available, Mikkel Hansen can play the entire 60 minutes in attack without any problems, as long as he is freed from defensive duties.

Hansen has been flourishing since the arrival of Gonzalez, and the Dane is a happier man than he has been in a long time.

On Szeged’s side, Richard Bodo has been a bit reluctant with his goal-scoring this season, but he certainly hasn’t lost his skills, and the same goes for his Russian partner, Dmitry Zhitnikov.

Still, Hansen is likely to out-perform both of them.

It is hard for any left winger in the world to compete with Uwe Gensheimer, and when the former Rhein-Neckar Löwen player needs a rest, young Adama Keita is ready to compete.

Szeged lists a fine couple of left wingers as well, including the Nordic combination Källman/Sigurmansson, but neither one of them compares with Gensheimer.

At both ends of the court, PSG will have the advantage.

A couple of years ago, Banhidi was seen as the new rising star, and even though he is a great line player, he still has trouble to live up to his potential.

But, even though he has a great partner in the experienced Slovenian Gaber, neither player will reach the levels of Karabatic and Hansen.  Add the skill set of defense specialist, Viran Morros, to the equation and the odds favor PSG’s – heavily.

For sure, an interesting Spanish duel on the bench will await on Sunday – the young gun, Gonzalez, versus the experienced Pastor.

Their tactical skills are beyond doubt and from the outset this duel looks like a draw.

Stade Pierre de Coubertin may not be the scariest arena to visit, especially not for a team that’s used to the heated atmosphere in Hungarian halls. It rarely sells out, but at least some part of the audience can be quite loud.