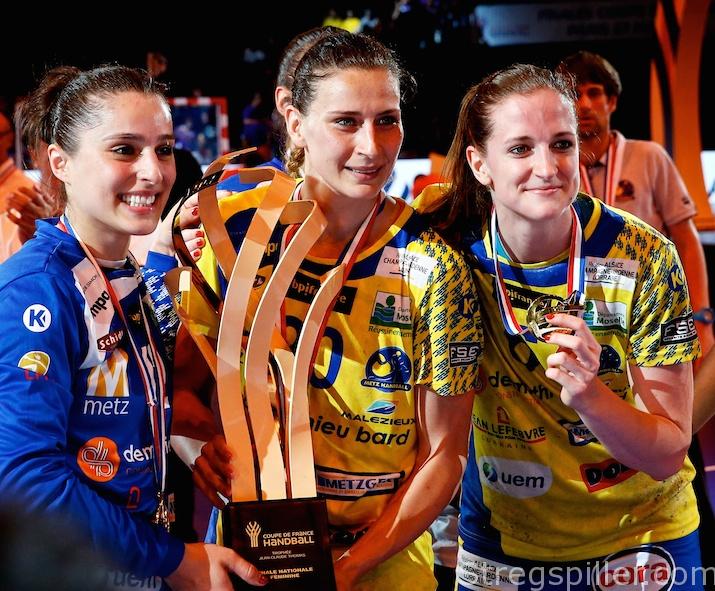 “Coming to Metz is not a walk in the park”

13 goals in the 2017/18 Champions League campaign, put Ana Gros on top of the scoring list of Metz Handball. After two wins, her side prepares for Buducnost,  a high-profile game that will reveal a bit more about what to expected from the French champion. Their recent success has earned them an upgrade as  “Possible FINAL4 Contender”.

Two victories, in as many Champions League games look like a perfect start for Metz?

AG:  At least the numbers say so.  Of course, we’re very happy that we’ve been able to negotiate those two meetings well, but we know this is just the beginning and that the hardest part is yet to come.  For now, we focus on playing well and not “falling asleep”.

It seems like there’s a certain serenity in the team these days?  Is this what you feel as well?

AG:  I think so – yes.  Most of the girls who are on the team right now have been playing together for a long time. This will help when going through bad times.  We know that we can rely on each other.  Personally, I am really happy that the very good chemistry that exists between us, off the court, translates so well when we’re playing handball.

Is this the secret of Metz not having lost a game since the beginning of the season?

AG:  It is one of them, at least.  We’re not playing perfect, but there’s always one of us stepping up for the teammate who’s not having a good day.  And the recruits who joined us this summer fit in really well.  Laurisa (Landre ed.) and Manon (Houette ed.) have the massive advantage of knowing half the girls even before joining, as they are playing in the French national team.  On the court, it feels like they’ve been here for a long time.  Their experience has helped them to settle in very quickly.

Does the game against Buducnost look like the first real Champions League test?

AG:  It will be a whole other level compared to the first two games, no offense to the other competitors.  This will be a very physical match, Buducnost have a history of being a real tough team to play against.  And even though they lost Cristina Neagu, Katarina Bulatovic and Dragana Cvijic this summer, they are  still very dangerous.  But we have the potential to beat them.  We saw it last season, when we succeeded against them in Metz.

Buducnost lost by ten goals last weekend against Kristiansand. Do you expect them to show a different face this time?

AG:  Yes, this loss doesn’t mean anything.  Just because they had an off-day doesn’t mean they’re not dangerous going forward.  Bietigheim played very well against Buducnost and still didn’t win. Now, Buducnost have some pressure because they have to succeed against us, in order to get back on track qualifying for the next round.

Maybe for the first time ever, Metz are playing against a “Big” European team with the lable “Favorite” tagged on your back.  Do you think that opponents treat you differently this season?

Up to a point, yes.  We’re not in the same category as Györ or, let’s say, Vardar, but everybody in Europe now knows that coming to Metz is not a walk in the park.  Before, we were a team that could beat anyone but also lose to almost everyone.  These days, there’s some kind of stability in the results.  Now, the other teams take us more seriously compared to the past.

Any other reasons for it?

AG:  Well there are many reasons.  The fact that we beat Buducnost, Vardar and Györ at home in the same season helped, as well as reaching the quarter finals in 2016/17.  Also, the club managed to keep the roster intact, and added two French national players – that’s a factor as well.  Everybody knows what we’re capable of and teams coming to Metz experience some more pressure.  On the other hand, they are really motivated to beat us, as they know it’s not going to be easy.

Would a FINAL4 appearance feel somehow logical, given the club’s progression in the last few years?

AG:  It would feel logical but we have to be realistic.  Two seasons ago, playing the FINAL4 was a dream, it felt impossible.  Now, it’s a little bit less unrealistic, still it would be a true surprise if we’ll make it.  We have gained a lot of experience over the last two years, and it feels like we are ready to take another step.  But then again, so many things can happen before the end of the season –  it’s too early to talk about it.