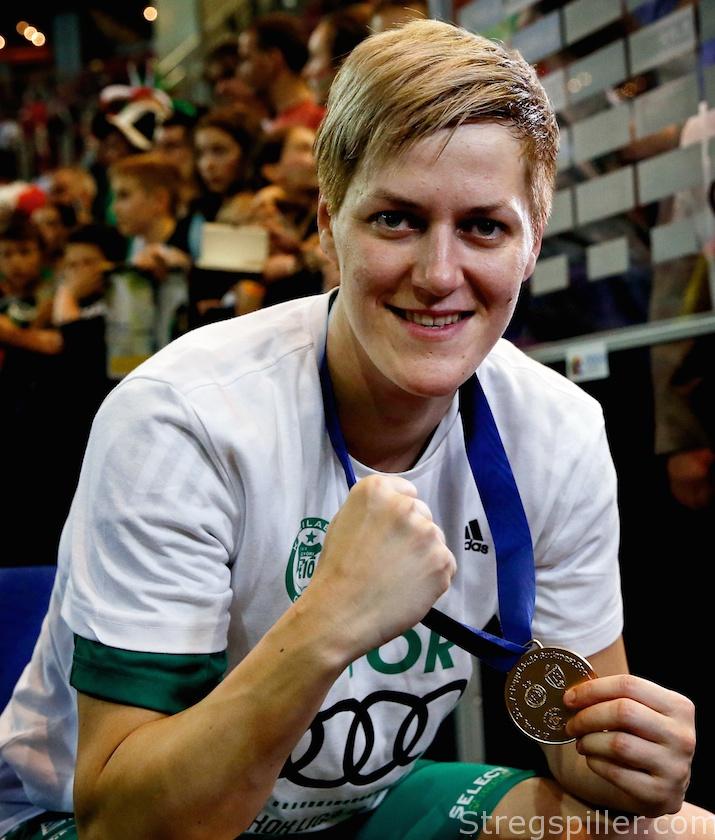 INTERVIEW – Zsuzsanna Tomori stays with Györ despite the ”Norwegian invasion” – the influx of new players in the summer of 2018 will heat up the competition, especially on the offensive end.

But Tomori just extended her contract and right now she simply enjoys playing at both ends of the pitch, as she reveals in this exclusive interview with stregspiller.com.

She can be knocked down, but she cannot be kept down.  This seems to be the simple truth when talking about Zsuzsanna Tomori.

She just recently reported back to active duty in Györ after yet another long injury break – and the comeback has been a successful one for the 31-year-old versatile backcourt player.

In recent years, she has played in defense for the most part, but injuries and illness of some of her teammates such as Anne Mette Hansen, Eduarda Amorim and Nora Mørk have led to more time for Tomori in attack.

Actually, she can occupy all three positions in the backcourt line – 15 goals have come from her right hand in Györ´s first three main round matches in the 2017/18 Champions League.

“I am just happy to help the team where I can – and right now, that’s not only in defense, but also in the attack.

“Of course, it feels really great to score goals again.  I am doing my best to regain my top level.

“After such a long injury break, it is just great to be back on the court again, and I hope it’s going to get better and better match by match.

“I am happy with my many goals, of course, but I am even happier with the support I have received and still get from my coaches and teammates,” Zsuzsanna Tomori tells stregspiller.com.

Best place to fulfill my dreams

Before this season, there were plenty of rumors about her leaving Györ to a foreign club.

Danish Team Esbjerg, for example, was quite keen on signing the experienced Hungarian, but to the surprise of many of the pundits, she decided to stay in Hungary.

“I really appreciate the working conditions here, and I also like the atmosphere in Györ – handball aside.

“Yes, it’s correct that there were clubs who called me from abroad, but I decided to stay after all.  I believe that I made the right decision,” she says.

Not even the “Norwegian invasion” including Midtjylland’s star player, Veronica Kristiansen, made Tomori think twice about her future in Györ.

While Danish left back Anne Mette Hansen has been “loaned” to Hungarian league rival Erd (not necessarily the destination she was dreaming about before moving to Hungary) Tomori will remain with the team.

In fact, she recently extended her contract with the Hungarian handball powerhouse.

“Yes, I have prolonged my contract with Györ for one year with the option for one more season thereafter.

“I simply see Györ as the best place to fulfill my dreams.

“I think it’s the club that offers the best opportunity to win the Champions League again, and that’s my big dream,” says Zsuzsanna Tomori who has played in Hungary all her life.

She began playing handball in Dunaferr, before her senior career took off in Vac.  For the past 11 years, however, she has been playing in Hungary´s two leading clubs, Györ and Ferencvaros.

First, she spent three years in Györ, followed by five in Ferencvaros before returning to Györ.

“I am very lucky because I did and still can play in one of Hungary´s two top clubs – I could not be more satisfied.

“Will I ever play in a club outside Hungary?

“Nobody knows what will happen after my current contract with Györ expires.  Never say never,” she says with a smile.

Injuries do not change our goal

Györ are the reigning Champions League winners and their stated objective is to defend the title in Budapest, in May of this year.

However, a flood of injuries has put a question mark behind their status as favorites.  Important backcourt players such as Eduarda Amorim and Nora Mørk as well as veteran line player, Anja Althaus, are hard to replace.  But according to Tomori, current personnel problems do not change Györ´s main objective.

“Our goals have not changed because of the injuries of some of our players.

“These difficulties have only made us more determined and hard-working in order to reach our objectives.

“We want a repeat and, if possible, reproduce our success from last season.

“Together we have been working very hard, so I hope we are going to show everyone what we can do,” she says.

Györ´s objectives may very well be unchanged, but their main round campaign certainly did not start according to plan.

A clear defeat (22:28) on the road against CSM Bucuresti was definitely not the result Zsuzsanna Tomori and her teammates were aiming for.

Their next Champions League assignment will be a re-match against CSM when the Romanians will visit Audi Arena on Monday, February 26.

Obviously, Tomori, who scored seven goals in Bucharest, is hungry for revenge, but a bit cautious at the same time.

“It is going to be one of the toughest matches in the Champions League, this year.

“Unfortunately, we could not win in Bucharest and the goal difference is significantly tilted in their favor now, but we will try our best at home in front of our fantastic fans and try to get our revenge,” she reassures.

“I am really longing for Zsuzsanna Tomori to return to the national team,” Hungary´s Danish national coach, Kim Rasmussen, told me recently.

He does not have to wait for Tomori´s comeback any longer. She is ready.

“I think it is every handball player´s dream to represent her home land and to wear the national team jersey.  At least for me it is.

“I am very happy to have this opportunity and I am working very hard to also perform well in the national team.

“I also like the atmosphere in the national team and as I said before, it is a big honor to be part of it,” says Zsuzsanna Tomori – a true fighter who keeps coming back time after time.