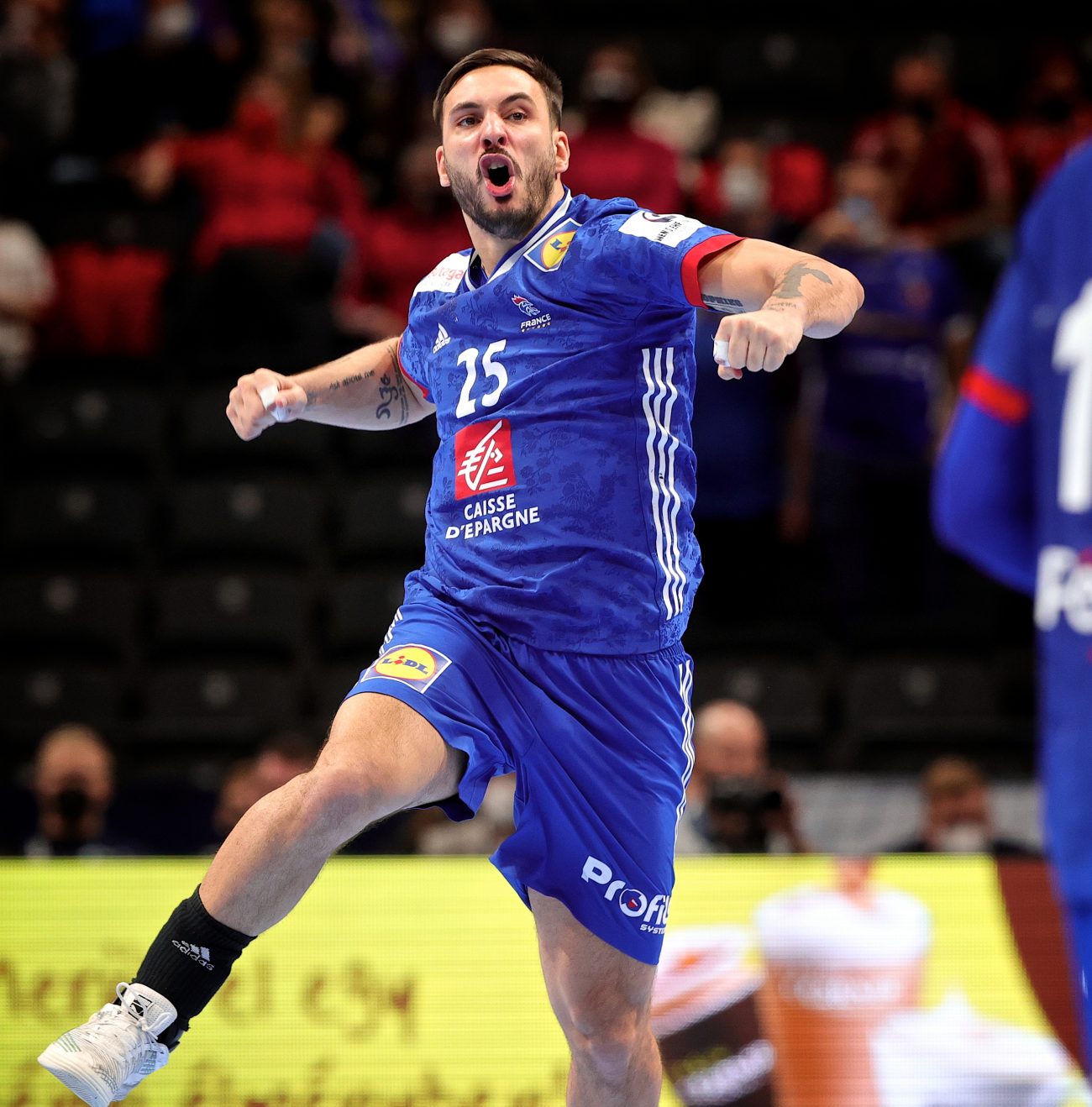 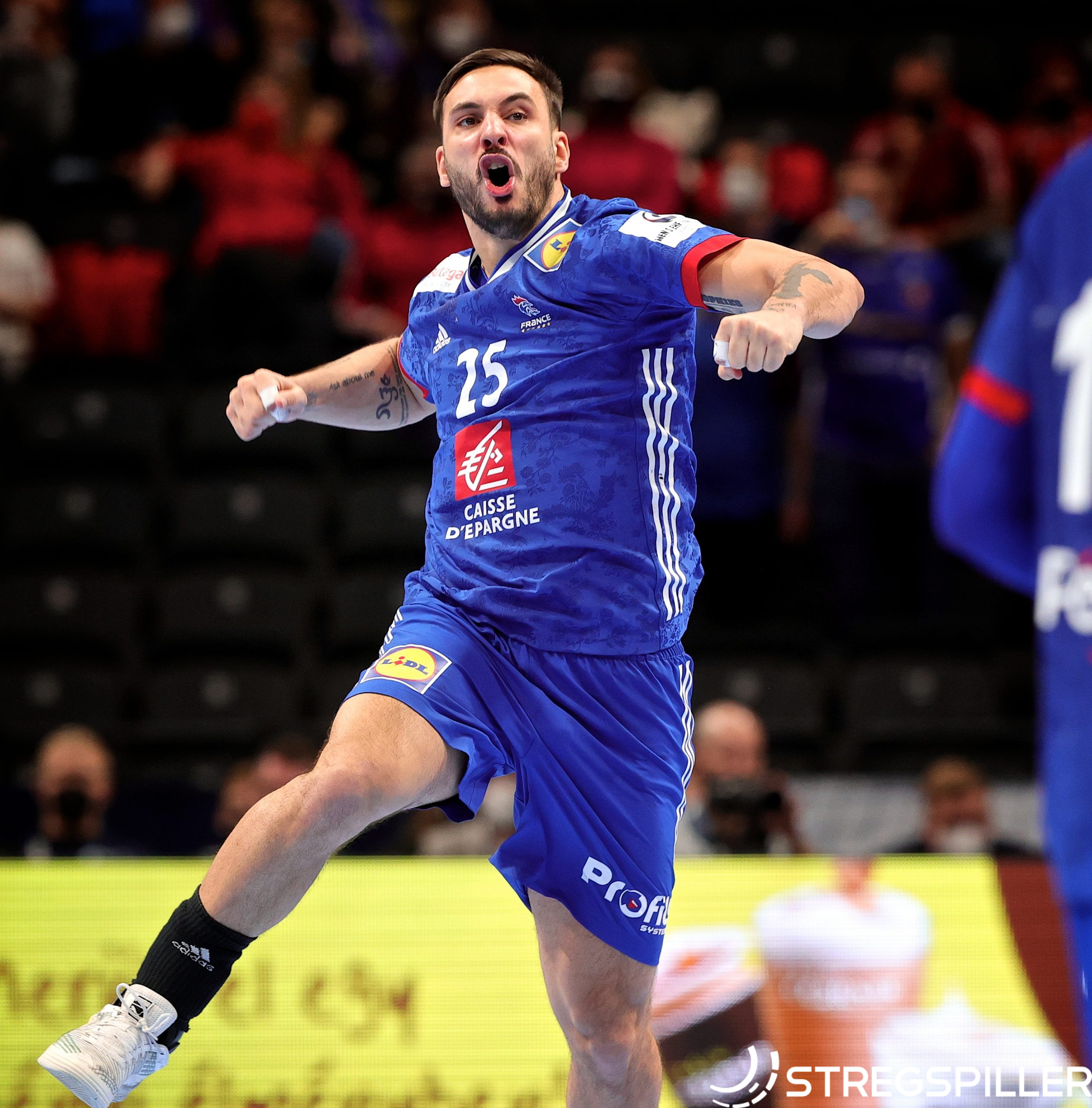 BUDAPEST – The dust has settled and the four contestants for a final round of handball at the EHF EURO 2022 are determined.  France and Denmark (top 2 in Group 1) will meet Sweden and Spain (top 2 in Group 2) on Friday at the MVM Dome in Budapest; 5th place will be decided between Norway and Iceland.

In the very last match of the main round France defeated Denmark in dramatic fashion.  After trailing by five goals midway through the affair, Karabatic and Co. dug in deep and squeezed out a one-goal win against their Scandinavian rivals, who decided to rest their top players (Mikkel Hansen, Matias Gidsel and Magnus Saugstrup).

The earlier victory of Iceland against Montenegro required France to either draw or win in order to advance to the semifinals.  The decision of Danish head coach, Nikolaj Jacobsen, to sideline his star players did not sit well with several Icelandic fans who unloaded their frustrations  on Twitter and other social media outlets after the final whistle.

1/6 Reading some of the comments after the Danish defeat makes me disappointed.

Handball is a gentleman sport.
We fight for 60 minutes, mostly without violence or flopping. With respect! At championships fans show respect for each other and have a good time together. https://t.co/0WGcXQqo9H

The semifinalists by the numbers

How do the semifinals shape up in light of the ongoing risks produced by the persistent Covid virus and the imponderables it creates on a daily if not hourly basis?

Offense wins games, defense wins championships. In case the old adage continues to hold merit Denmark and Sweden find themselves in good shape as the two teams have received the least goals thus far in the competition. Sweden tops the list with 117 goals received, followed by Denmark’s 123.

All of it was accomplished while adhering to the rules of the game. Three of of the four finalists (Spain, Denmark and Sweden) rank among the EHF’s top four squads in the category “Fair Play”. Only France find themselves further down the list after collecting two red cards and twenty-four 2-minute penalties, thus far in the competition.

Turning to the other end of the court it will be all but assured that the record of “Best Scorer” won’t be challenged.  At least not during this European championship. The historic high-water mark set by Norway’s left-back, Sander Sagosen, at EURO 2020 (65 goals) seems to be out of reach.  Before the semifinals and the match for 5th place between Iceland and Norway, Omar Ingi Magnusson leads all scorers with 49 goals:

In goal the Danish and the French goalkeepers lead the pack with a combined saving rate of 35% (Landin / Moller) vs. 34% (Gerard / Pardin). On his best day, Landin can decide a game himself, a similar statement cannot be made about Gerard or Pardin – at least not yet.

Spain’s Perez de Vargas and Rodrigo Corrales have stopped  71 of the 233 shots coming their way, a saving rate of 30%, while Sweden’s top shot stopper, Andreas Palicka (30% saves) had to isolate because of a Covid infection just before the critical battle against Norway this past Tuesday.  Instead of him, Peter Johannesson and Tobis Thulin will have their hands full – literally – to help advance Sweden to a final match on Sunday.

Matias Gidsel (Denmark) is the name that first comes to mind – he currently ranks 10th among the top scorers, after converting 35 of his 36 shot attempts in the five games he played at EURO 2022. The exceptional performance translates into a mind-boggling 97% (!) efficiency rate.

Currently, most of the pundits as well as his colleagues on the pitch rank Gidsel as the world’s best player.  Will he continue to rise over the course of the next two games?

For Spain, Gonzalo Perez de Vargas and Rodrigo Corrales can single handedly shut down an opponent it appears. Especially, when the game is approaching crunch time, head coach, Jordi Ribera, can rely on his two outstanding goalkeepers.  Last second accomplishments in the games against Russia (Perez de Vargas) and Poland (Corrales) speak for themselves.

Before the last game in Group 1 of EURO 2022 between Denmark and France there was much talk and praise about the “Winning Culture” in connection with the three time champions from France.  By now it’s history, but “Les Bleus” did step up big in the second half and lived up to what’s so hard to create and maintain – a winning culture. It would be a grave mistake to underestimate the enormous will power and desire the reigning Olympic champions still have or better said… maintain. After all it’s their 21st semifinal appearance in a major tournament since 2000!

Sweden may once again have to improvise given recent news about renewed Covid spread among the players.  Missing the likes of Hampus Wanne, Niclas Ekberg and Daniel Pettersson in a semifinal match does not need further explanation – it would devastate any hopes the European championship record holder may have.

At today’s EHF press conference which was attended by the coach and one player from each one of the semifinalists, the only question nobody raised, but all have in the back of their mind is whether COVID will shake up the lineups one last time before EURO 2022 will go down in history as one of the most challenging as well as controversial handball events  of all time.

The news coming from the Swedish camp on the eve of the semifinals are not encouraging and hopefully all teams will receive only negative (test) results over the remaining days of the competition to assure a “successful” conclusion of EURO 2022 – as odd as it may sound.