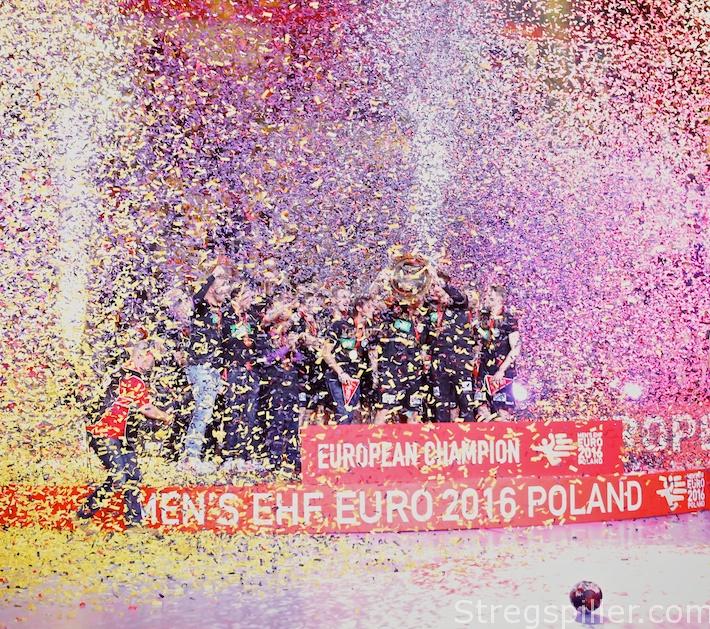 Column – The EHF EURO 2016 will be remembered as the wildest ever – not for fantastic handball, but for an abundance of sensational results.

The Men´s EHF EURO 2016 in Poland, which ended Sunday evening, will not go down in history as the greatest European Championship ever because of the quality of handball that was put on display – but because of the many unexpected results and the sensational winner.

In the first European Championship ever without clearly marked goal lines – only a difference in color marked the boundaries between the area inside the goal and the rest of the pitch – the overall quality of the matches were not breathtaking, to say the least.  But there were plenty of surprises.

It was only logical, that one of the most astounding teams, Germany, won the tournament.  Even if Germany had been able to send their strongest crew, probably not many people – including Germans – would have wagered many EURO’s on them to become the 2016 European champion.  The long list of injuries that hit the German squad in the months and weeks before and during the tournament, made the performance appear all the more spectacular.

In fact, the title was won by a team that had to go about their business without the likes of Patrick Wiencek, Uwe Gensheimer, Patrick Groetzki and Paul Drux.  And the two last matches were played without Steffen Weinholt and Christian Dissinger.

So why did Germany win?  It’s partly explained by the fall of the usual favorites, but also because of a fantastic team spirit, willpower and last but not least because of an exceptional coach.  Germany´s Icelandic coach Dagur Sigurdsson proved once again that he is a tactical genius and at the same time an expert in making his players work together, believing in themselves and in each other.

When speaking of positive surprises, we have to mention Norway as well.

Three marvelous wins – 34:31 against Croatia during the group phase, a 30:28 victory against Poland and 29:24 against France in the main round – were enough to qualify the Norwegians for their first ever semi-final at a major championship.  And only some very small elements decided the semi-final against Germany, where Norway lost 34:33 after extra time.  Unfortunately, for the bronze medal match, Norway had lost some of their steam and Croatia had no real problems, securing a 31:24 victory.  Still the Scandinavians were happy, having accomplished the greatest result ever by a Norwegian men´s handball team.   Norway´s best result before 2016 was a sixth place on home ground at the EURO 2008.

However, and with all due respect to Germany´s and Norway’s accomplishments in Poland, it has to be said that they benefited from competition that was lacking quality and a tournament in which the favorites failed to perform.

“Does France want to be European champion at all?” we asked before the tournament.  Generally speaking, their uninspired performances showed that they did not.

Already before the championship, national coach Claude Onesta made it clear that the Olympics in Rio, in August are the Frenchmen´s main objective this year and that attitude was visible in several of France´s matches in Poland – and most obviously demonstrated in the deciding game for the semi-finals that ended with a clear 29:24 defeat against Norway.

Denmark would have certainly liked to become European champion, but the Danes failed disastrously.  They won all their preliminary matches as expected, but only their performance against Hungary, who were defeated 30:22, really made the Danes look like potential winners.  In their first main round encounter, they made an impressive comeback against Spain in the second half and won 27:23 in the end – it was Denmark’s best half of the tournament.  However, missing two “match points” against Sweden and Germany that would have secured the semi-final was simply unacceptable.

Against Sweden, Denmark was leading 28:25 with two and a half minutes left, but drew 28:28, and against Germany, they did not manage to score for the last seven and a half minutes.  Coach Gudmundsson saw a 23:21 lead change into a 25:23 defeat.  Having missed the semi-final at the two most recent major championships – the World Championship in Qatar last year and now at the EURO 2016 – have made many Danes wonder, if Icelandic Gudmundur Gudmundsson is the right coach after all?  If Denmark misses the Olympic qualification as well ( they are meeting Croatia, Norway and Bahrain) Gudmundsson will have failed three times in a row and in that case, his time as Denmark´s national coach will undoubtedly come to an end.

A man, whose time as national coach already came to an end – though chosen by him – is Michael Biegler.  It is impossible to not respect the way he lived up to his responsibility, retiring immediately after Poland´s disappointing exit, following a humiliating 23:37 loss against Croatia.  The Balkan nation rose to the occasion towards the end of the tournament.

While being extremely disheartened by the performance of the Polish hosts, it was impossible to not be impressed by their fan reactions.  Those 15,000 in Krakow’s Tauron Arena that Wednesday night had obviously decided to have a party no matter what.  Irrespective of how much their heroes were humiliated by Croatia, the fans continued to cheer for their team.   Respect!

We did not mention Spain yet – after all, they did reach the final.  Were they a negative surprise too?  In my opinion the answer is – yes.

Obviously they did what it took to reach the tournament’s ending game, but they definitely showed signs of weakness along the way, not the least during the main round match against Denmark.

In the final, the Spaniards appeared to have run out of physical and mental resources.   Only Arpad Sterbik – who is not Spanish by birth as we all know – looked like the player  who really wanted to become the next European champion.

All in all – congratulations to the startling performances of Germany and Norway.  It was a refreshing handball experience.  Can you do it again?