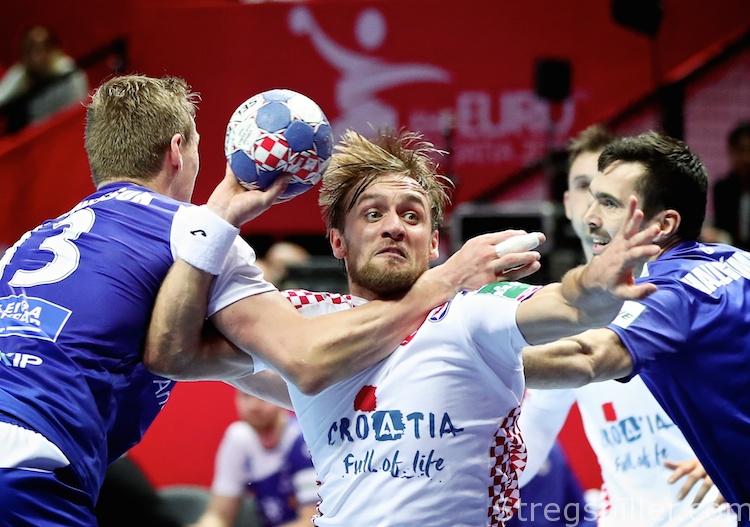 Croatia and Sweden are ready for the main round after Day 2 in Group A, in Split.

Both teams earned decisive and deserved victories against Iceland and Serbia respectively, while the two losers will fight it out for a last main round ticket, on Tuesday.

Both teams were under significant pressure after losing the first game of the tournament.

Only three out of four teams in each group will proceed to the main round, and the loser of this match could quite possibly leave the competition.

At first sight, Serbia appeared to be under more pressure, having lost as big as 32:22 against Croatia in their first match, while Sweden could take a bit of optimism based on their decent finish in the game against Iceland, where Sweden managed to reduce a 10-goal deficit to a 26:24 loss, in the end.

Sweden left no doubt which team would clinch main round berth.

The Scandinavians were leading from start to finish and even though Serbia cut the gap to two goals with 10 minutes and a bit left, Sweden’s victory was never in any real danger.

From the start, Serbia tried several different defense formations – 5-1, 3-2-1 and even 3-3 – but no matter what, Sweden kept scoring at will.

Actually, in the first seven minutes, Sweden scored a goal per minute. And Mikael Appelgren performed well behind a strong 6-0 defense. A saving percentage at 55 just said about everything about the 28-year-old Rhein-Neckar Löwen keeper´s performance in the first 30 minutes.

As a consequence Sweden took a clear lead at an early stage. A 4:2 advantage quickly changed to 8:3, 13:7, 14:8 and 15:9.  Serbia´s coach Jovica Cvetcovic spent two of his timeouts in the first half, but without being able to stop the Swedes.

Serbia continued having trouble with Sweden’s defense in general and with Appelgren in particular. But as the second half progressed, the Serbs managed to inch closer step by step, while their own defense got a slightly better grip on the game.

With less than 11 minutes left to play, Nemanja Ilic managed to create real tension, when he reduced the deficit to two goals, 23:21.

But this was as close as Serbia got, and when Jerry Tollbring made it 27:23 in favor of Sweden, with two players less on the court, it meant game over.

Eventually, Sweden increased their margin of difference to seven goals (30:23) before Serbia were allowed to score a couple of consolation goals.

With a saving percentage of 44 in total and 55 percent in the first half, Appelgren stood out from a very solid Swedish team effort.

Earlier he told stregspiller.com that he plays his “own game” whether his team is nine goals up or down. His recipe worked today, for sure.

Having earned their first two points in the tournament, Sweden are now ready for the main round, and Kristjan Andrésson´s men must have gained plenty of confidence before Tuesday’s meeting with host Croatia.

At the same time, dark clouds are gathering above Team Serbia.

Judging by their efforts in the first two matches, it is difficult to see how they will pull off that necessary win against Iceland – it will be their only hope to proceed to the next stage of the competition.

While everything signaled peace and harmony in the Icelandic camp, there situation at Team Croatian looked decidedly different not the least because of Domagoj Duvnjak´s leg problem, an injury he suffered in the final minutes of the match against Serbia.

But Croatia tried to downplay the drama around Duvnjak, suggesting a return later in the tournament. Meanwhile, Denis Buntic was called up, a decision difficult to understand. Why did Lino Cervar chose the left-handed backcourt player from Hungarian Pick Szeged to replace playmaker Duvnjak?

Crotia clinched their main round berth in convincing style and a second win.

Iceland, on the other hand, managed to hang with the host until the break, but they did not stand a chance, when Croatia stepped up the pace in the second half.

The first half was almost as evenly matched as it could possibly be.

Until the 20th minute, not more than one goal was separating the two teams, who took turns leading the affair.  Both teams defended in 5-1 formations, and with much success, before Croatia got the upper hand ten minutes before the break.

Igor Karacic created the first two-goal difference in the match, when he made it 10:8, and three minutes later, Ivan Cupic increased the lead 12:9.

But Iceland bounced back and at 13:14 the teams changed sides.

While Iceland put in a brilliant effort in the first half, soon after the break the game began moving away from them.

They did score the equalizer, but that was their last success in the game. Croatia scored the next five goals, and the writing was on the wall.

The home team never surrendered their five-goal lead, instead Croatia continued building their advantage, while Iceland’s resistance disappeared, much to the joy of yet another sell-out crowd at Spaladium Arena.

Cindric takes the honors for a second match in row.

The 24-year-old playmaker from Vardar Skopje did a fantastic job making up for Duvnjak’s absence, scoring seven goals on nine attempts.

Croatia could have hardly qualified for the main round in more convincing style. With two clear wins, they have lived up to the high expectation of the whole country, so far.

It is impossible to not look forward to their “group final” against Sweden, on Tuesday. Whereas Iceland will have to protect their last chance for a main round ticket against Serbia.