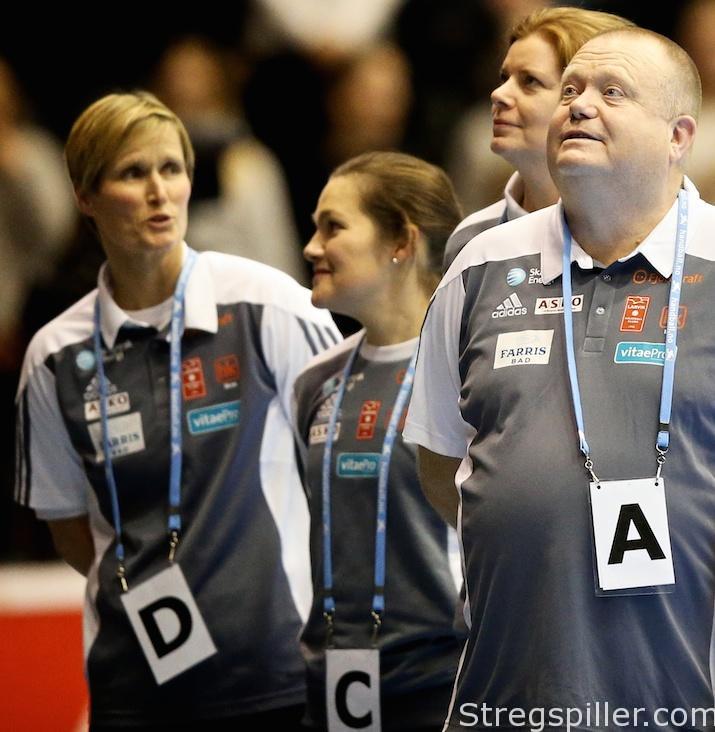 Crucial points at stake in Norway

PREVIEW – MATCH OF THE WEEK, GROUP 2

Larvik and Bucuresti have a lot at stake, when the ruling Champions League winners visit Norway on Saturday.

Larvik are currently third in the group sitting on eight points, while CSM are right behind with one point less. Krim Ljubljana are still breathing down their neck.

“We only managed to get a draw whe we met them at home, and we would have certainly liked to get more, but hopefully, we can make up for that point lost this time.

“However, we realize that it will not be easy in Norway,” CSM´s Croatian goalkeeper Jelena Grubisic tells stregspiller.com ahead of the match at Boligmappa Arena in Larvik.

As Grubisic said, the most recent match between the two teams ended in a draw.

In the very first match of the main round, on January 27th, the encounter in the Romanian capital ended 26:26.

Larvik were leading 26:23 with less than three minutes left, but CSM was lucky and achieved the draw.  The game not only was the two teams´ first meeting in the Champions League, it also was the first time they met in any European competition.

Each player in their very own way – Amanda Kurtovic and Isabelle Gulldénvv- are both crucial for their team.

Kurtovic plays an impressive season as right-back, and she has made it much easier for Larvik to get over the loss of Nora Mørk. Her 59 goals make her the second highest scoring player in the Champions League season so far, and they help to explain why Larvik are close to the quarter-finals now.

Gulldén was hampered by an injury in the first part of the season, but she has improved lately. “Bella” is extremely important to CSM, organizing their offense and controlling the game.

Duel of the Match Part Two: Toft vs Ungureanu

Yet another match were the contest between the two goalkeepers may be decisive.

Sandra Toft has an excelent season so far. She did very well for Denmark at the European championship, and she has kept up the good work when she returned to Larvik.

In the goal of CSM, Paula Ungureanu is back from injury, and the Romanian veteran is undoubtedly eager to show who is best. If the 36-year-old Romanian international should fail, CSM coach Aurelian Rosca can rely on Croatian Jelena Grubisic to get the job done.

Tor Odvar Moen does not have such qualified and experienced goalkeeper substitutes at his disposal.

Duel of the Match Part Three: Riegelhuth vs Martin

We will see two of the best right wings in the world in this match.

Yes, Linn-Kristin Riegelhuth Koren still is among the best right wings on this planer, certainly when catching a good day. Experience also speaks in her favor, and it is still a mystery, why national coach Thorir Hergeirsson could not find use for her at the 2016 European championship. Now, he won’t get another chance, as she quit the national team.

Many people characterize Carmen Martin as the best right-wing at the moment. She may not have shown it lately, but the 28-year-old Spanish international is definitely a key player for CSM, with a decisive impact on any game.

As mentioned above, CSM will welcome back Paula Ungureanu, while they are still without Danish right-back Line Jørgensen.

Larvik pulled a surprising and impressive 27:27 draw away against Gyor in their last Champions League appearance.

For the second time in the main round, however, the Norwegians lost a three-goal lead in the final minutes of the match.

CSM had some problems for large parts at home against Esbjerg, but in the end, the Romanians earned a convincing 33:25 victory.

Both teams are on top of their respective national leagues, and recorded clear wins.

Larvik have shown superb form as of late, and their performance in Gyor demands respect.

CSM are still a bit difficult to figure out. They certainly have not played their best handball when on the road therefore, I see Larvik with the edge – 60:40 in favor of the Norwegian’s.

Gyor are favorites on the road against Krim later on Saturday, and so are FC Midtjylland in Esbjerg on Sunday.