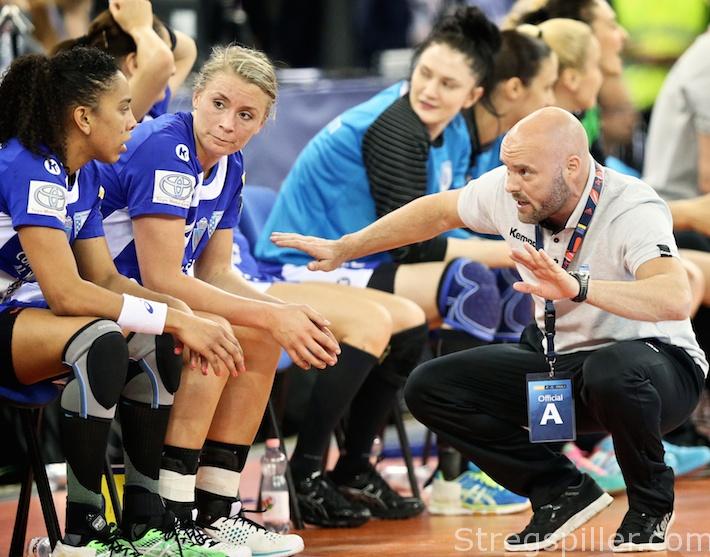 CSM Bucuresti stunned the handball world, never allowing Vardar a serious chance in the second Champions League semi-final, which the Romanian side won 27:21.

Naturally, CSM’s coach Kim Rasmussen was particularly motivated to defeat Vardar.  It was the Macedonian handball powerhouse that fired the Dane after only 16 days at the job as “consultant” back in January 2015.

Considering Rasmussen’s tactical masterpiece against Rostov-Don, a surprise win against Vardar was not out of the question.

However, Vardar´s quarter-final performance had not been less impressive, as they thrashed last year´s losing finalists, Larvik, 34:20 at home, in the first leg.  Vardar had steamrolled the Norwegian squad 12:1 in the first 15 minutes of that match.

After this powerful demonstration, Indira Kastratovic´s women could afford losing 28:26 in the second encounter, in Norway, without putting a stain on their reputation.  Reaching the Champions League final was even more critical for Vardar this year after finishing third in the two previous seasons.

When the two “Andrea’s” – Lekic and Penezic – do not perform on gameday, Vardar is a rather ordinary team.  For those who did not know this already, the fact was displayed in this Champions League semi-final without mercy.

Lekic did become the top scorer of the match with six goals, but this personal success could not hide the circumstance that the Serbian playmaker did not have the impact that would have been necessary to bring Vardar near a victory.

The key players of the crew from Skopje had a bad day, including goalkeeper Amandine Leynaud.  However, this should not take anything away from another stellar performance of CSM and their coach, Kim Rasmussen.

CSM’s performance throughout the 60 minutes was simply impressive and the short periods when his squad lost their concentration were without consequence. Kim Rasmussen said after the match, that he was a bit “shocked”.  Well, not all of us were.

Some CSM players almost looked frightened before the beginning of the match.  However, there was not a trace of any fear as soon as the action commenced.

What a start the Romanian Champions League debutants had.  The score of 0:1 was turned into 7:1 in almost no time, and for the first 25 minutes, scoring goals seemed like the easiest job in the world for the team from Romania’s capital.

Line Jørgensen from right-back, Ana Paula Rodrigues from both any position, Carmen Martin and Maria Fisker from the wings, Oana Manea from the line and on counter attacks, Isabelle Gulldén from the playmaker position – anything was possible and it all worked.

In goal, Jelena Grubsic was invincible and CSM’s defense was awake from the very first second.  Indira Kastratovic was forced to call for timeout after barely ten minutes already, her team was down 4:1, but that did not help at all.  CSM continued to pull away via 7:1, 10:3 and 14:7.  Actually, Vardar could consider themselves lucky being only five goals down at the half time buzzer.

Having gotten the better ending to the first half after being humiliated, more or less, throughout the first 20-25 minutes, gave Vardar reason for some hope, as the last 30 minutes began.

However, when Isabelle Gulldén ended a nine-minute CSM scoring drought, making it 15:9, it was the beginning of the end for Vardar.

While Grubisic continued to perform minor miracles between the goalposts, her teammates went back to scoring goals at high speed, at the other end of the court.

The seven-goal lead from the end of the first half was soon re-established and further increased soon thereafter.  Vardar’s low point came, when CSM scored twice within a few seconds in an empty net, changing the score from 20:11 to 22:11.

Towards the end of the match, coach Rasmussen provided court time to his bench, while the intensity of the game went down. Vardar were allowed to put some cosmetic adjustments on a “bad picture”.

I am probably not the only one who is looking forward to the Champions League final between Gyor and CSM on Sunday.

Which one of two great tactical minds – Ambros Martin (Gyor) and Kim Rasmussen (CSM) – can make the difference this time around? Spanish against Scandinavian handball philosophy!  Can it get any more exciting?

Vardar came to Budapest with the clear objective of avoiding another third place.  Now, third place is the best they can hope for – once again.

CSM’s coach Kim Rasmussen during the press conference following the game: “I cannot remember the first 50 minutes! Only the last seven! That’s my problem!”