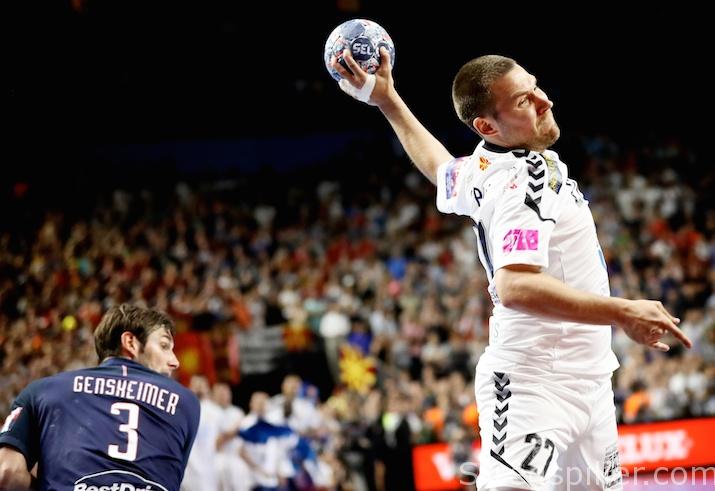 Playing the final match in the Champions League was a new experience for both clubs.

Vardar were debutants at the FINAL4, while PSG secured a third place in their maiden voyage in the previous year.

The two teams had to work hard to collect their ticket to the final, as both qualified through one-goal wins in the semi-finals on Saturday.

Ahead of the game, Vardar´s experienced Spanish playmaker, Joan Canellas, believed to have the recipe to defeat the French favorites.

“We have to be perfect, otherwise we do not stand a chance against the possibly best team in the world,” he told stregspiller.com.

Could PSG’s offense crack Vardar´s characteristic 5-1 defense was yet another key question.

To PSG´s Danish left-back Mikkel Hansen, it did not really matter, what kind of defense he would be up against.

“For us, it does not really matter. I think the next game will be as tough as the one we had Saturday. It will be very close,” Hansen said.

Obviously, there would be a new Champions League winner, but at least to me, it was a big surprise not to say a sensation that it turned out to be Vardar.

Several Vardar players claimed the role of being the underdog ahead of the final round of Europe’s most prestigious club tournament. But after an intense and very physical fight, they can now call themselves Champions League winners 2017.

Actually, Vardar had the upper hand most of the time, but still, it was Paris who were leading at half time.

With Arpad Sterbik in goal and a very versatile attack, Vardar soon took the initiative.

No less than eight players scored Vardar´s 11 goals in the first half, making the defense job for PSG not any easier.

On the other end of the court, the PSG’s offense, struggled with Vardar´s trademark 5-1 defense.

Mikkel Hansen in particular needed some time to get on the scoreboard.

Vardar went up by three (5:2) and kept the three goal difference for quite some before PSG caught and Luka Stepancic provided the French with their first advantage, securing a 12:11 half time lead.

Nikol Karabatic found his form as the first half progressed, and Thierry Omeyer certainly did not allow Sterbik to be the only brilliant goalkeeper at Lanxess Arena.

40-year-old Omeyer performed numerous spectacular saves and kept PSG in the game, when they were in trouble.

After the two teams returned from the locker room, Vardar soon took over and got up by two goals.

Being down 16:18 with 12 minutes into the half, coach Zvonimir Serdarusic ordered a play of seven-against-six, in an attempt to help his squad to cut the deficit. The tactical measure was no success, however.

Just one minute later, PSG had conceded two goals into an empty net and found themselves three goals down at 17:20.

Back at six-against-six, though, Paris managed to catch up and scored the equalizer at 21:21.

Yet, Vardar went up by two up once again (23:21), but despite Luka Karabatic´s second suspension with a minute and 17 seconds left, PSG drew even, courtesy of Daniel Narcisse. Timeout Vardar.

As soon as the referees blew the whistle, Ivan Cupic received a quick pass, scoring his only field goal from right wing, sending Vardar and the nation of Macedonia into a frenzy.

Cupic became Champions League winner for the second year in succession, as he won the final with Kielce in 2016.

It would be easy to award Luka Cindric once again, but this time it goes to Arpad Sterbik.

The 37-year-old Serbian born Spaniard played a deciding part in Vardar´s triumph – keeping PSG to 23 goals does not only require a strong defense formation but a fantastic goalkeeping performance as well.

This evening Vardar enjoyed both.

Vardar will join the list that includes Hamburg, Flensburg and Kielce as the unlikely winners of the Champions League in recent years.

Their semi-final against Barcelonana and the very last match could have gone both ways, but all in all, it is no coincidence that Vardar lifted the trophy. They certainly deserved it.

PSG had to realize once again, that despite all their fine and expensive players, they still do not have the team that performs at crunch time.

For now, all that’s left is to thank all four teams for an unforgettable weekend in Cologne!