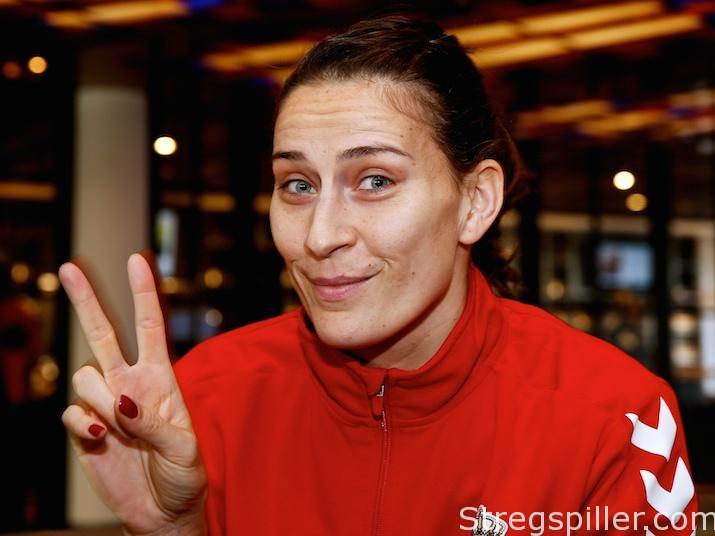 “Cvijic and I complement each other well”

INTERVIEW – The Serbian line player Sladana Pop-Lazic speaks to stregspiller.com about her cooperation with Dragana Cvijic on the line, Serbia’s chances at the World Championship and about her club, Brest Bretagne´s early exit from the Champions League.

Therefore, one might think that she would see Cvijic as a rival, but Pop-Lazic claims the opposite is true.

“We are not rivals, but teammates.

“It does not matter who plays more and who plays less. We are here to help and to support each other, and it is great to have two good line players. I am sure it will also help the team in the upcoming matches.

“To me, the most important thing is that we complement each other, and that we cooperate. This is the way we achieve our objectives,” states Sladana Pop-Lazic.

She finds it to be advantageous that she and Dragana Cvijic are two different types of line players.

“We are very different kinds of line players.

“She is bigger and stronger than me and she can take the physical abuse of the opponent’s defense much better, while I may have an edge in seeking out my position on the line.

“I find it great that we are so different – it means that we complement each other very well,” says Sladana Pop-Lazic.

Still not at full potential

She believes that she and her Serbian teammates have not reached their best level at the 2017 World Championship, yet

“We may not have shown our full potential, yet.

“We have exhibited good handball, but we can do better than what we have done so far, and – step by step – I am sure we will.

“This World Championship appears to be a very evenly matched tournament with many surprises in the various groups over the past few days – so you really never know what will happen next.

“Even before the last match day in our group, we can go from number one to number four, for instance,” the 29-year-old line player points out.

One of the reasons why she expects her squad to improve in the matches is the comeback of Andrea Lekic, who only returned to active duty a few days before the start of the World Championship after being sidelined with a shoulder injury for a month and a half.

“Of course, Andrea means a lot to our team, although we have shown that we can also perform well without her.

“For sure, we make use of all 16 players in our squad, and doing so is a great advantage in a long competition like this one.

“We do not want to put any kind of undue pressure on Andrea, but when she is fit, she obviously is a fantastic asset to our team.

“And if not, we will try to manage without her.”

A new club – but not without trouble

Sladana Pop-Lazic has been playing handball in France since 2015, and she is still there, but no longer employed by the same club.

That change has not been without complications, she admits without finding it to be alarming.

“It always takes time to fit in with a new team.

“We have had some good moments and some bad ones. In the Champions League, for instance, we lost some games by one or two goals, but I am sure that in the near future, we will have better results in the EHF Cup, where we will be continuing in 2018, and in the French championship as well.”

Unlike her former team, Metz, Brest were sent out of the Champions League already after the group phase.

It comes as no surprise that the early exit was a disappointment to her.

“As you probably saw, we could not always find each other on the court, due to the fact that we are a new collective of players – making it all work takes time.

“To a certain extent, it is up to the coach how long it will take, but I am sure I will see more time on the pitch as well, and that will help me improve and become more valuable for the team.