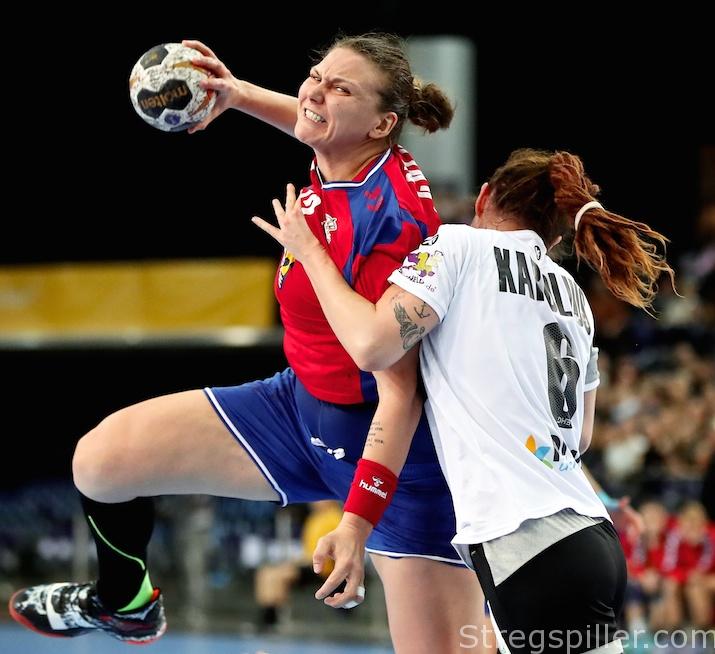 A buzzer beater from Dragana Cvijic saved Serbia a hard-fought point against host Germany on a day where Japan pulled off a sensational win against Montenegro.

Both teams entered the court of Arena Leipzig with maximum points based on the results of the first two matches.  While Serbia had recorded big wins against the two weakest teams in the group – China and Cameroon – Germany had a quite tough match versus South Korea before winning 23:18, and had no issues defeating Cameroon in the opening battle of the World Cup.

Ahead of the game, Germany’s coach Michael Biegler had nominated 19-year-old backcourt player Emily Bölk to the squad.

Both teams surrendered their first points in the tournament, but both sides can be content, having made the Round of Last 16.

The big question was if Andrea Lekic would be playing for Serbia?  She did.

Lekic played from the start, but with no success.

It made the job pretty easy for Germany’s defense, and Clara Woltering had a great start in goal as well.  After 11 minutes, Lekic was substituted, and from then on Serbia got a grip on the match.

It took Serbia the better part of five minutes to score their first goal.  By that time Germany were leading 5:1 and 6:2, but it did not take the Serbs long to get their game going.

In the 18th minute, Jelena Lavko equalized at 7:7, and less than five minutes later, Katarina Krpez Slezak handed Serbia their first lead, when she converted a penalty shot – 9:8.

Serbia even added another goal to their advantage before half time.

Serbia encountered just as big a scoring problem at the start of the second half, as they had at the beginning of the game.

Still, it took Germany five minutes to catch up the two-goal deficit, but Serbia did not waiver and before long they regained control once again.

Nine minutes into the half, they went up by three goals (16:13) for the first time, but Germany fought hard, came back at 19:19, and not even a two minutes suspension for coach Michael Biegler could shake “The Ladies”.

It was the second match in succession, that Biegler received a two minute penalty at a critical time of the game, with less than seven minutes to go and Serbia leading 19:18.

However, the Serbs were not able to benefit from having two players more on the court; Germany stayed in the game and line player, Jenny Karolius, scored their first lead in the second half, when she made it 22:21 with a minute and 27 seconds left.

Germany even regained control of ball, but threw it away.  Seconds before the buzzer, Serbia´s powerful line player, Dragana Cvijic, earned her team the draw.

Attendance was somewhat disappointing, but those who were at Arena Leipzig did their best and created a good atmosphere and supported their team.

The result assured both teams of the Round of Last 16, of course, but as is known by now the rankings in the group are not without importance, to say the least.  The two teams have important matches coming their way on Wednesday already.

Serbia have only 21 hours before they will take on The Netherlands, while Germany prepares for a much easier game against China.

Other results in Group D:

Japan pulled off the sensation, as they defeated Montenegro, the very same team that opened the group by defeating Denmark 31:24 before losing narrowly against Russia.

The Montenegrins were somewhat in control of the first half, when they were leading by three or four goals several times, thanks to a stellar performance of right back, Katarina Bulatovic.

Early in the second half, however, a fast and technically good Japan team managed to turn the table.

At 21:20, they took the lead for the first time, and the advantage soon increased to three goals at 26:23.  It was difficult to recognize the same Japanese team which was run over 32:18 by Denmark only two days earlier.

Montenegro came back, but the last goal of the match belonged to Japan.

Japan are now on three points, while Montenegro stay on two.

Slovenia doubled their number of points to four, while Angola stay on zero.  Still, the Africans were able to follow their opponent all the way through the first half.

After the break the Slovenians left no doubt which team would succeed, and in the end, their win grew even bigger.

Finally, the Hungarians got their first points in the tournament, while dealing Argentina their biggest defeat so far in the competition.

Still, coach Rasmussen´s Hungary is still in danger of a premature exit from the World Championship.

Sweden stopped the Czechs´ winning streak and boosted their own Round of Last 16 hopes – considerably.  But it did not always look like it throughout the first half.

The Czechs were dominating and even leading by five goals several times.

However, as Isabell Gulldén drew even at 18:18 and Nathalie Hagman handing “Tre Kronor” their first lead at 22:21 , everything went Sweden´s way from then on.

The Swedes are now on four points just like the Czechs.

The Norwegian players Heidi Løke and Emilie Hegh Arntzen were out with food poisoning, but that did not stop their teammates from running over Poland.

Kari Brattset, who was all by herself on the line in Løke´s absence did a brilliant job throughout 60 minutes, and so did the rest of her teammates.

Norway quickly went up 6:2, and that four-goal lead was increased to nine already in the first half.

In the second half, the Scandinavian did not slow down, but kept pushing until they had reached a double-digit lead.

Romania stay undefeated and qualified for the Round of Last 16, while Spain suffered their first defeat in this thriller in Trier.

The two teams took turns leading the match in a low-scoring affair, which was not decided until Romania went up 19:17 because of penalty shot with 36 seconds left to play.