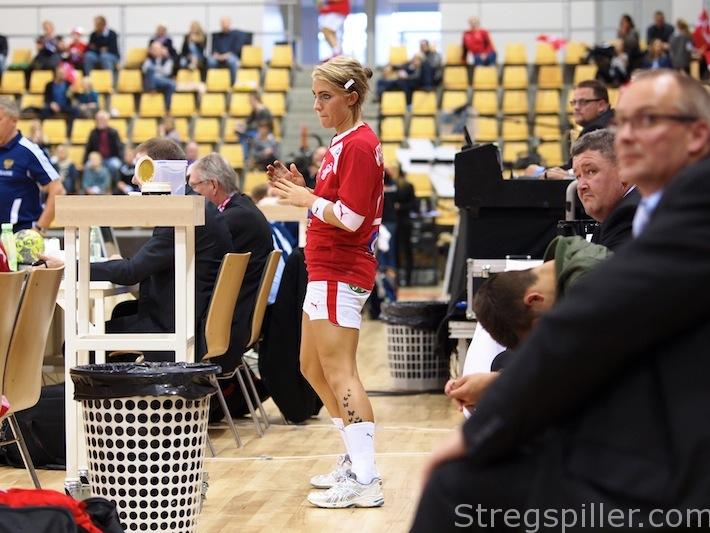 What do the Roman emperor Julius Caesar, the Danish shipping magnate Arnold Maersk Mc-Kinney Moller, Patrick Stewart, known as Captain Jean Luc Picard in Star Trek, “The Next Generation” and Kristina “Mulle” Kristiansen (24) the agile playmaker of TVIS Holstebro and Team Denmark have in common?  The answer to this trivia question – all of them were born on July 13.

The not so trivial question whether “Mulle” Kristiansen can provide similar type leadership qualities to the Danish national handball team as the aforementioned iconic men could soon be answered on the handball courts at the 2013 World Championship in Serbia.  For now her stars seem to align favorably for the big event in December.

No doubt the year 2013 has treated the middle-back player from TVIS Holstebro very well.  First came the achievement of winning a silver medal in the Danish GuldBageren League – a historical first for team Holstebro and “Mulle” Kristiansen alike.   The celebrations continued after winning the EHF-Cup against HB Metz in dramatic fashion.  One week after a sobering 4-goal loss at Grakjaer Arena the team of coach Niels Agesen was able to turn the tables beating Metz on their home court 33:28 – Kristiansen scored 12 goals!  In June Kristina was voted Danish National Handball Player of the Year by a wide margin and shortly thereafter she extended her contract with TVIS for another three years until 2016.  At the time “Mulle” had made up her mind to stay with her current team much to the excitement of her coach who considers Kristiansen being part of Holstebro’s DNA.

After circling in and out of the Danish national handball team over the last 2-3 years “Mulle” has now become a key factor and plays an important role in the plans of coach Jan Pytlick.  The recent announcement of injury plagued Laerke Moeller of not being able to join Team Denmark en-route to World Cup 2013 would not do justice to Kristiansen’s accomplishments and certainly not explain her elevated status in the national team.   Moeller’s decision to sit out this year’s World Cup tournament and instead focus on her physical recovery is dictated by logic and the realities on the handball court.  Aside from Kristiansen’s momentary superb form – Lotte Griegel (Esbjerg) and Jane Schuhmacher (Skive) are in excellent shape as well compared with the fragile Midtjylland playmaker.

Denmark’s coaching team places great trust in Kristiansen’s outstanding abilities to direct the team’s offense while dictating the rhythm of the game.  In addition to a healthy physique she also feels more mature mentally as she has enjoyed extra minutes on the field in preparation for the big year-end event.   Apparently coach Pytlick has found “Mulle’s” position in the squad’s defensive lineup therewith taking advantage of her explosive speed in counter attacks.  While opponents will have to deal with and adjust to Kristiansen’s super fast pace of play – to her national teammates from TVIS (Ann Grete Norgaard and Mette Gravholt) it will be second nature.  One thing for sure handball fans around the world can look forward to turbo-handball a-la Kristiansen in Serbia.

Assuming Kristina stays injury free Jan Pytlick will have to choose between Griegel and Schuhmacher.  Given Griegel’s experience with the national team as well as being amongst the leading scorers in the league this year she may have a slight advantage over Schuhmacher and make the trip to Nis where Denmark meets China in their first game of World Cup 2013 on December 7.

Since her first trip to the World Cup in 2009 Kristiansen has developed into a fierce contender mentally and physically.  In a 2011 interview she referred to her tattoos (ten at the time – may be more by now) as “small, painful, feminine symbols of toughness.”  2013 may well turn out to be the year when opposing teams will have to endure exactly that – a very tough Danish team led by one of the most talented athletes of the DHF – Kristina “Mulle” Kristiansen.

What a year it has been for the high-speed playmaker hailing from Hoje-Taastrup – the final chapter has not been written yet.