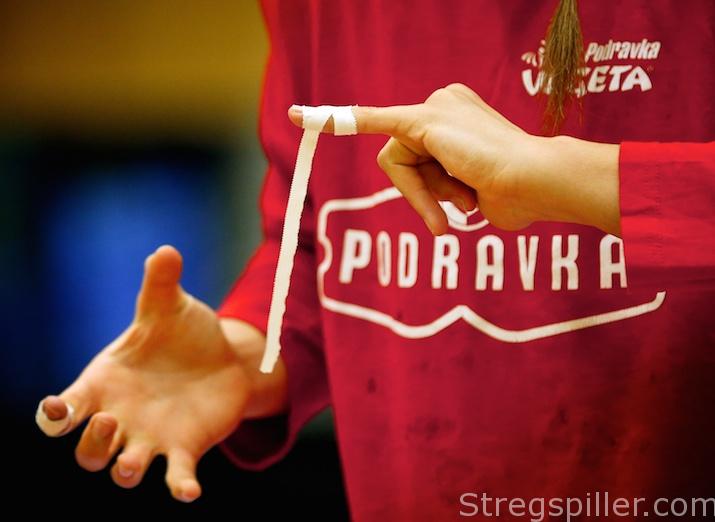 stregspiller.com MATCH OF THE WEEK PREVIEW – Sunday evening’s game between Podravka and Györ has turned into an early fight for the top in Group C, but that doesn’t make it an even affair.

Let’s face it on paper the match looks like being a David and Goliath contest but this time Goliath (Györ) will have succeeded when all is said and done.

Györ Audi ETO are the huge favorite when they visit HC Podravka Vegeta, on Sunday evening. But Podravka´s surprising win in Germany against Thüringer HC, last weekend, in addition to two impressive wins in the the qualifiers may make the match more interesting than most of the pundits anticipate?

Both teams list three goalkeepers, but even though Jovana Risovic has gained experience with the Serbian national team as well as in several clubs around Europe, they cannot compete with the world-class talent Györ can show.

Leynaud and Grimsbø play in two of the probably best national teams in the world and Eva Kiss´ – national keeper in Hungary – is not that far behind.

With all due respect for Turk and Zradavec, Bodi and Czech international, Knedlikova, are simply at a higher level.

Actually, this position is one of Podravka´s two strongest positions and Yezhykava was the top scorer (7 goals) against Thüringer HC.

For arguments sake, we have chosen Nycke Groot as the only backcourt player who actually shoots with her left hand as well, and Afentaler as a substitute.

Podravka´s Russian playmaker, Natalia Chigirinova, has been on fire this season after joining from Astrakhanochka.

In the qualifiers as well as in the first group match in Germany, she has shown her qualities and certainly has lifted Podravka’s game.

On Györ’s side, we have placed Görbicz along with Oftedal, but Groot or Veronica Kristiansen will cover the position just as well, and despite Chigirinova´s qualities Györ will dominate.

Ihkneva, another Russian arrival from Astrakhanochka, has been another reinforcement to Podravka.

However, the two players on Podravka’s side pale in comparison with the likes of Kristiansen, Hansen and Amorim.

Slovakian, Maria Holesova, has done well since arriving from Michalovce, and here it looks like Podravka may enjoy a narrow advantage, but only if Györ doen’t place Anita Görbicz on left wing, where she has performed so well in recent years.

Podravka can come up with no less than three options on this position, but even though Kari Brattset will be all by herself after Yvette Broch´s sudden and surprising career stop, the Hungarian side has the upper hand.

The old fox, Saracevic, may have an ace or two up his sleeve to surprise Danyi who is still new in his job as head coach or won’t he?

The home advantage will always have to be taken into consideration, of course, but the atmosphere in the Sports Hall Fran Galovic, in Koprivnica, will not scare the experienced players from Györ.

While Podravka have been able to rest for the entire week, Györ played a domestic league match, on Wednesday, winning 47:23 at home against Békéscsaba… without being pushed against the wall.

All in all, it looks only the margin of difference will be in doubt before a very one-sided Champions League battle that will see Györ as the most likely winner.