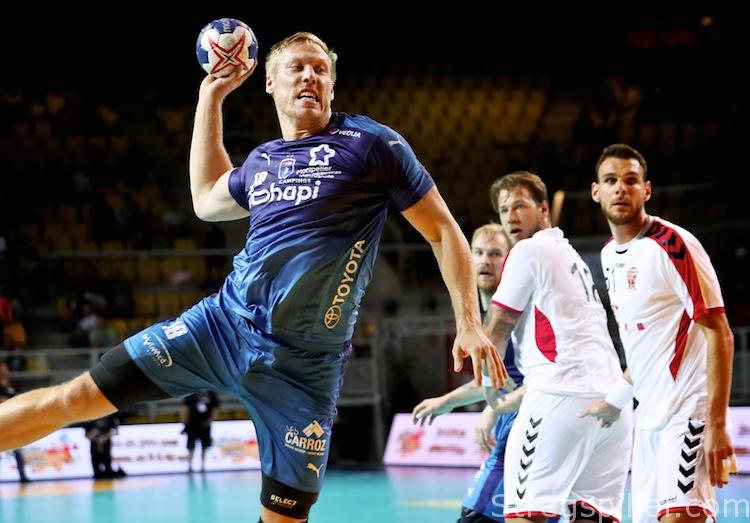 stregspiller.com MATCH OF THE WEEK – David Davis got off to the best possible start in his new job as head coach in Veszprém, while defending Champions League winners Montpellier suffered their fifth defeat in as many games.

*Montpellier entered round 5 of the VELUX EHF Champions League on a four game losing streak, unprecedented in the history of the competition.

*Iranian born, left back, Iman Jamali (Veszprém) was listed on the team sheet for the first time this Champions League season, otherwise Davis pretty much stuck to the same squad as his predecessor.

David Davis will be happy and relieved after winning a tight match that could have gone either way. The new head coach has vowed to bring back the Spanish elements in Veszprém’s handball game, but based on today’s match, it’s too early to tell if he’ll succeed. This Saturday in Southern France, it was just enough for a narrow, but important victory.

The first 30 minutes were an entertaining affair as the lead changed frequently, but no team could pull away.

Andreas Nilsson’s presence on the line was felt in particular, as he scored four of his five goals in the early part of the match.

As the game went on coach Davis showed that he was not afraid of making changes, replacing his starting backcourt line (Laszlo Nagy, Mate Lekai and Borut Makovsek) with Kent Robin Tønnesen, Petar Nenadic and Momir Ilic.

On the other side, Montpellier’s, right side was especially effective with Melvyn Richardson and Vid Kavticnik creating pressure and both line players – Shebib Mamedou and Fredric Pettersson – benefited from it.

Montpellier enjoyed the better start and until 4:2 the 2018 Champions League winner had the upper hand before Veszprém slowly climbed back into the game.

The Hungarians had their first lead, when Makovsek made it 5:4 (11th minute), extending it to two goals shortly thereafter.

However, Montpellier improved defensively – Vincent Gerard had replaced Nikola Portner in goal – and the change paid immediate dividends. Five unanswered goals (10:12 to 15:12) turned the table before Veszprém scored last in the first half.

In the opening minutes of the first half, coach Davis opted for Dejan Manaskov on left wing, but after the break, Manuel Strlek took his place. A clever move as it turned out. Seven minutes into the half Strlek had scored three goals already, ending the match as his team’s high scorer (6/7), eventually.

Still, he could not prevent Montpellier from taking a series of three-goal leads early in the half. It only changed when Roland Mikkler replaced Arpad Sterbik in goal, putting a stop to the dominance of the home team.

Mikler had immediate impact, saving several open shots. And slowly but surely the game took a deciding turn as Veszprém reclaimed the lead (24:23) and never looked back.

In a hectic finish, Veszprém had to wait until the very last seconds to begin celebrating. Before, Mackovsek had provided a 30:29 lead and when Mikler denied a wide-open shot from Mamdouh, Veszprém’s victory was fact.

The match did not provide as many answers as Veszprém’s new coach may have hoped for.

It’s still too early to say if Veszprém are back on track. A one-goal win against a depleted team, in crisis, does not allow for any in-depth conclusions. Veszprém’s next game, at home against Rhein-Neckar Löwen, on November 3 will be more telling.

Montpellier will get their next and better chance against Kristianstad to turn things around and record their first points in the 2018/19 edition of the VELUX EHF Champions League.