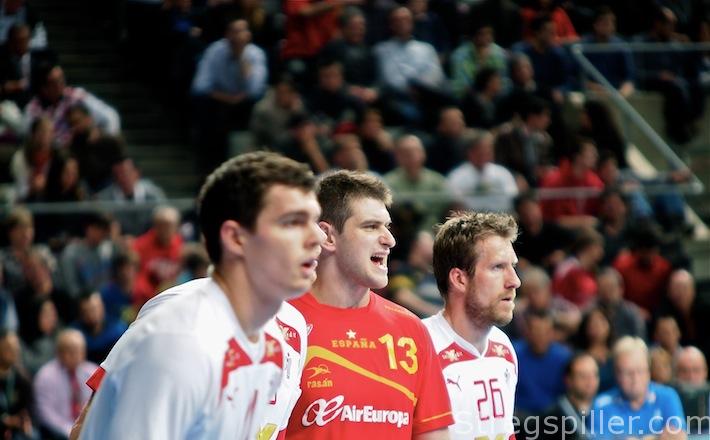 January 27, 2013 may have been the darkest day for Danish handball ever – certainly in recent years.  In the gold medal game for World-Cup 2013 team Denmark was crushed by the Spanish host 35:19 (18:10).  It was not so much the loss itself but the way it happened.  The acclaimed attacking game of Mikkel Hansen & Co. suffered a stunning collapse in front of a wild sell-out crowd and a Danish coach who had to watch in disbelief.  Before the final game Denmark was averaging 62 attacks per game with a scoring efficiency of 52%.  In the last match of the tournament Denmark ran 65 offensive efforts while scoring a dismal rate of 29%.   The ending affair was effectively decided by half-time and the second period felt like an eternity if you rooted for the team in red and white.  That was then and this is now.

EURO 2014 is currently taking place on Danish soil and the local team is riding on a wave of golden expectations.  In the first three games of preliminary group play the men of coach Ulrik Wilbek could not really be challenged by the teams of Macedonia, Austria and Czech Republic.  Yet ccompared with the numbers of the Spanish World-Cup a year ago it is conspicuous that team Denmark is not rushing its attacks as much.  So far the squad has been running only 56 attacks on average with a scoring efficiency of 57%.  Is it a deliberate approach or an exception to the rule?  Will we see more of the same in the first match of the main round when Denmark looks to revenge the devastating loss against Spain a year ago or witness the return of the trademark running game?  On Saturday the two teams will meet for the first time since that historic day at Palau Sant Jordi some twelve months ago.  There is more at stake then just two points – it is the first opportunity to erase the memory of a humiliating performance and restore pride to a nation that lives and breathes handball in the best sense.  But will Spain play it’s part and make the Cinderella story come true?