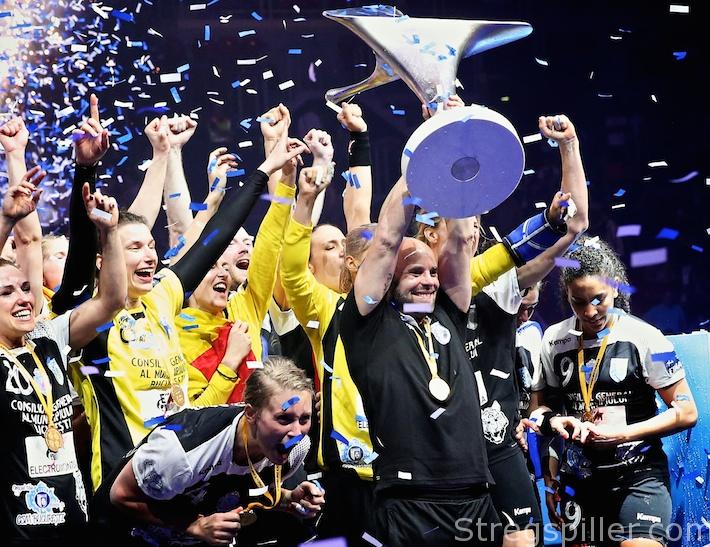 The debutants went all the way!

With her only goal in the match, Aurelia Bradeanu decided the Women´s EHF Champions League final in favor of CSM Bucuresti.

After a nail-biting thriller – during regulation time as well as in OT – the Romanian Champions League debutants went all the way and lifted the trophy for the very first time.

CSM had already worked themselves into the surprise package of the Champions League 2016 edition.

Coming from fourth place in their main round group, beating undefeated Rostov-Don in the quarter-final – only to humiliate Vardar in the semi-final of the FINAL4 on Saturday.

One might argue that CSM had spent less resources beating Vardar 27:21, while Gyor were involved in a tough and close game before defeating Buducnost 21:20, but in fact Gyor was enjoying the extended break in between matches.

Still, most experts ranked Gyor as favorites, but so did most of them ahead of the quarters against Rostov – and ahead of the semis against Vardar.

Another factor that worked against CSM´s chances pulling another sensation was the fact that now they would not enjoy the support of most of the spectators anymore.  Playing a Hungarian club on home turf, you are obviously playing against a vociferous crowd.

With her only goal in the match, Aurelia Bradeanu decided the final!

The 37-year-old Romanian veteran scored the ultimate goal in a penalty shoot-out that had to become necessary, as neither team had been able to move ahead.  Not in the regular 60-minutes of play, nor in extra time.

After a match that was so evenly balanced, there is no point in talking about who was the better team, or if the CSM win was deserved.

However, the bottom line is, that two great handball teams gave each other a fantastic fight and the rest of us a lot of entertainment and excitement.

The Champions League novices from CSM Bucuresti – the Romanian team who has been the underdog ever since they started out in the first leg of the quarter-finals against Rostov-Don – went all the way and are now Champions League winners.

Huge congratulation to the team and what a way to say goodbye to the Danish coach, Kim Rasmussen.  He must be able to decide his own salary in his next job,

Isabelle Gulldén was on fire from the start.  The Swedish playmaker scored CSM´s first four goals in the match, and together with Jelena Grubisic, who showed another fine performance in goal, she was the key player, in keeping CSM in the game, while resisting heavy pressure from Gyor.

Gulldén did not stop at scoring her team´s first four goals, though.  Eight goals on eight attempts read her score sheet at half time – and her match tying penalty shot (11:11) was her 100th goal in the current Champions League this season. Impressive!

Scoring three of her team´s first four goals (six in the first half), Gyor´s Norwegian line player was a crucial factor once again.

The first 30 minutes were even all the way, and the distance between the two teams was never bigger than two goals.

It was Gyor, who was leading most of the time, but CSM took a one-goal lead with them into half time. The score came after the buzzer had sounded, on a penalty shot from Isabelle Gulldén – who else?

From the start of the second half, it was CSM´s turn to lead by two goals for the first time, as they got up 14:12.

However, this was only the beginning to another completely balanced and absolutely breathtaking 30 minutes with changing leads galore.

Neither team managed to get ahead by more than a couple goals.  Gyor did seem to be on their way to decide the game, when they got up 21:19 with five minutes or so left on the game clock.

But CSM came back once again and even as “luxury” substitute, Anita Görbicz, made it 22:21 on a 7-meter penalty – her only goal in the match – the affair was still not wrapped up.  A deflected long range shot from Linnea Torstensson with five seconds to go, forced the match into extra time.

In line with the initial 60 minutes of the game, it almost seemed logical that extra time would end without a winner as well.  It was as if the match itself was of the opinion that it did not deserve a loser.

Not even when Gyor got up by two goals again, and not even when CSM were not able to score for the entire first half of extra time, did we get a decision.

The match did not have a winner, when Gyor led 25:23 in the second half of the extra 10 minutes of play.  A penalty shoot-out became inevitable.

Of course, it played into the cards of CSM´s last comeback that Gyor had to play the last 33 seconds with one player less on the court, as Eduarda Amorim was sent off for “attempted murder” on Linnea Torstensson.

It is about nerves and luck in this very special department in the sport of handball – and we must conclude that CSM had better nerves and certainly the better ending.

For this writer, it is about getting the pulse down and nerves back under control.  I bet it’s just about the same for everyone else who was at the Papp Laszlo Arena on this memorable evening in Budapest.