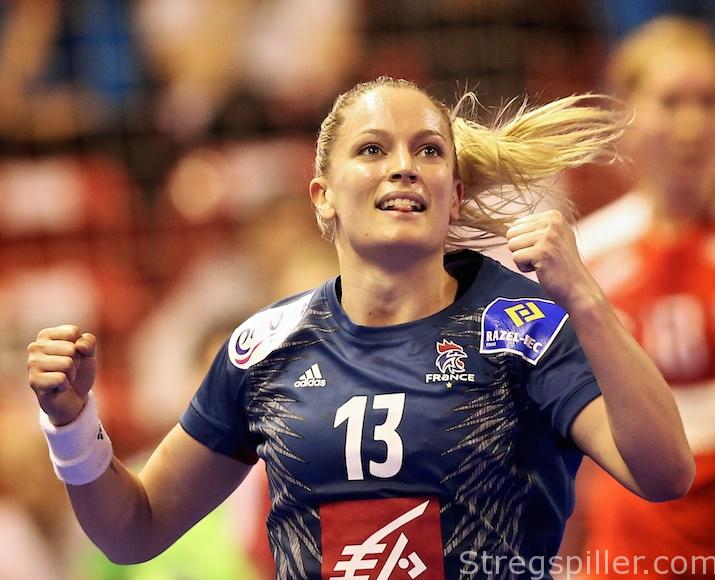 “Defending the title is a huge motivation”

At the moment, France are at the very top of women’s handball. Just a couple of years ago, the likes of Norway, Netherlands and Russia were among the first ones that came to mind when asked to name the favorites before the commencement of an international competition.  Times have changed and it’s different now. After winning the IHF World championship in 2017 and the EHF EURO last year, Olivier Krumbholz’ & Co. fly to Japan as titleholders for the first time since 2003.

Despite the Olympic Games in Tokyo being eight months away, France will compete at the 2019 World Cup with an almost complete roster. One of two missing players is left-wing and captain, Siraba Dembélé-Pavlovic. In her absence, it will be the perfect opportunity for Manon Houette to shine. We caught up with the player of Metz Handball before she took off.

How do you feel before flying out to Japan?

I’m all right. I feel like we’re heading into the unknown – Japan is a lot different than Norway or Denmark, places we are used to go. But, we’re looking forward to start the competition. This world championship is something we’ve been thinking about for quite some time. There’ll be lots of things to discover: a new culture and a new competition format. It will be a lot deviation from the previous version and we’re wondering how we’re going to react to it.

The new format seems to be something that’s widely discussed among the French players? Is it really something to worry about?

We had plenty of things to worry about in our respective clubs. But, the fact that we’re going to play twelve matches in twenty-eight days, including preparation, is something I’ve been thinking about for a while, now. We don’t know how we’ll do at the start of the competition as we usually start poorly, but this time there will be no room for it. We have to give 100% beginning with the very first game while preserving some energy for the end of the competition. That’s a complex equation to solve.

What else are you concerned about?

We’ll have to adapt. We watched the men’s World championship, and it felt like the biggest question was: which team is going to be the fittest by the time of the final? I think that this new format may not crown the team that plays the best handball, but the one which can remain fit for the longest period of time.

Considering all plus the fact that the Olympics are just around the corner, did you ever think about not competing in the World Cup?

It never crossed my mind. Defending the title is a huge motivation as well as keeping the positive momentum. I don’t think we can finish ninth in the winter and hope for a gold medal at the Olympics. That’s not possible. I think we’ll learn a lot of things here in Japan – how our bodies will react to the jet lag and how we can recover after games.  The staff has been to Japan twice already to prepare everything and I think even before we land in Tokyo, off-court we’ll be ahead of many other teams.

Does it change anything knowing that France have already booked their ticket to the Olympics?

I’ll be honest with you, as we’re still a few days before the start of the competition. I was in Metz on Sunday and now we’re flying to Japan – everything is happening so fast. But, I’m sure once we get to Tokyo, the winning mode will kick in again. It’s always hard to look forward but Olivier Krumbholz told us that we’ll be playing against teams that will be hungry to go to the Olympics.  So, when you face a team that’s giving 100%, then you have do the same. I don’t think we’ll be on holidays over there.

What kind of difference does it make to you to not have Siraba Dembélé-Pavlovic on the team?

I don’t know yet. It’s really different.  I’d say I’m out of my comfort zone. Having a player with such charisma and talent as the number one on the wing, makes it easier for me. When I’m playing well, then it’s great, but if not, she would step in.  Now, I won’t have this kind of safety net. But, I’m trying to not think about it too much as I’ll try to keep the momentum. I was really happy about my defensive game at the EURO and how I did in offense in the 2017 World championship. I’ll have to find the best mix.

No, not much. For sure, having to start matches and play during the last seconds of important games will be different. But, I’m no stranger to it, it’s something I do on a regular basis in Metz.