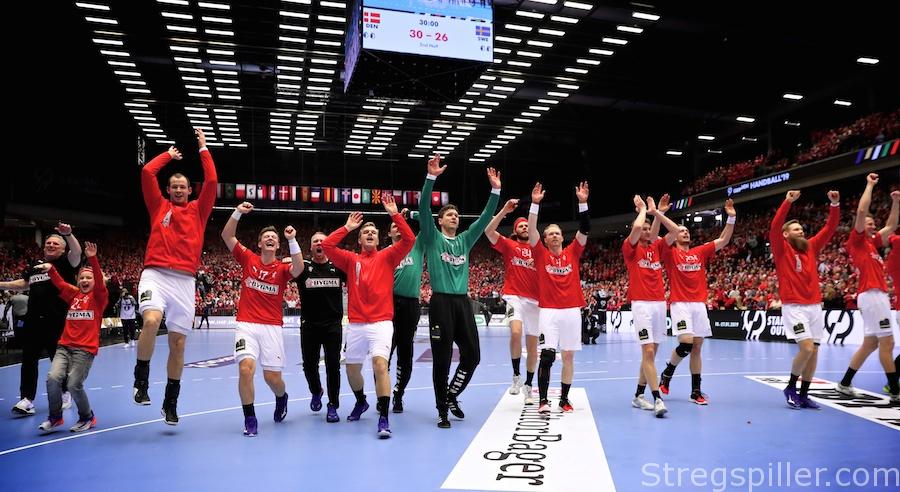 MATCH REVIEW – As the only team in the tournament, Denmark has yet to surrender a single point.

On Wednesday night, the Danes assured themselves of the semi-final at the 2019 World Championship, after their eighth win in as many games, defeating a hard fighting Swedish team.

The Norwegian win against Hungary in the earlier match meant that Sweden would need a win of at least three goals in order to proceed to the semi-final, while Denmark would still go through, even with a four-goal loss. The Danes could even “afford” a defeat by five goals, in case they would score at least 27.

The first half was an even affair with Denmark enjoying the upper hand in the first 10- and the last five minutes of the match, while Sweden were dominating in between.

Denmark’s speed, an aggressive 5-1 defense formation in the second half and Niklas Landin in goal, were the deciding factors in this game.

Nikolaj Øris was back in the staring lineup and he immediately made his presence felt, as the bearded, right back from Bjerringbro-Silkeborg scored the first three goals, making sure the hosts would have a 3:2 lead.

Thereafter, Øris got a bit too optimistic, missing his next two shots, as Sweden’s goalkeeper, Andreas Palicka, showed improving form.

Palicka´s presence was particularly felt by Mikkel Hansen, who did not only miss a penalty shot, but scored only two goals on eight attempts, in the first half.

Still, Denmark stayed ahead (5:3), but four Swedish goals in a row changed the score to a two-goal lead for “Tre Kronor” at 7:5.

Sweden’s pressure intensified, when Mattias Zachrisson replaced Niclas Ekberg as right wing and Kim Andersson stepped in for Albin Lagergren on the right back position.

As head coach, Nikolaj Jacobsen, pushed Magnus Landin forward in a 5-1 defense formation, all of a sudden Sweden’s attack got problems and Denmark came back, after trailing 9:12.

Henrik Toft, with his first goal in the tournament, secured the tie, seconds before the break.

However, Denmark’s 5-1 defense worked well and Sweden continued having trouble, when in attack.  And, after Rasmus Lauge secured another Danish lead (19:18) nine minutes  into the half, it was Denmark´s game.

Despite missing another penalty shot, Mikkel Hansen finally enjoyed some success as well, and in the fifteen minutes that remained, Denmark’s win number eight never was in real danger.

“It was a tough match between two teams, who know each other very well and like to run.

“In the first half, we did not succeed with our game and we missed too many opportunities, but it all changed after the break, when our 5-1 defense formation and Niklas Landin guaranteed our victory

“Now, moving to Hamburg for the semi-final after having played eight games at home will obviously be a new experience for us, but we are such a tried and tested team that I am sure we’ll handle this situation as well.”

In the first half, we were successfully running with the Danes, but in the second half, it became too difficult for us, as we could not deal with Denmark’s defense and Niklas Landin in goal.

“I do not know what more I can say right now except, congratulations to Denmark and the semi-final.”

Denmark can look forward to meet France in the semi-final in Hamburg, on  Friday evening, while Sweden will face Croatia in a rather unimportant match for fifth place.