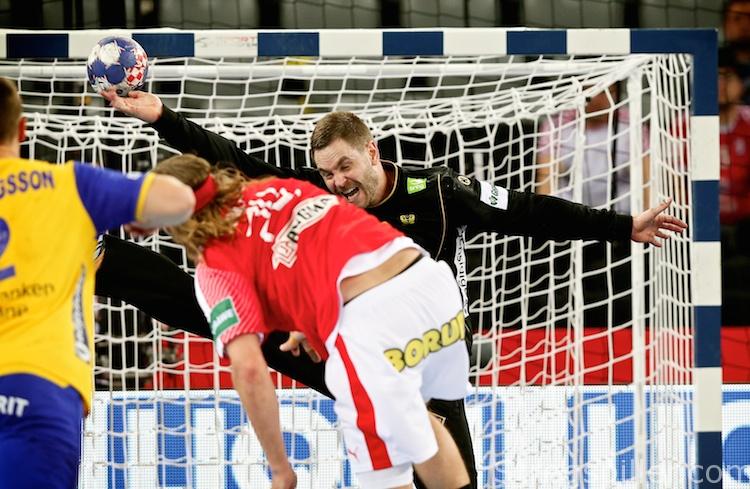 “Our defense can make us European champions”

INTERVIEW – Sweden´s star in the semifinal against Denmark, goalkeeper Andreas Palicka, believes in his team´s defense qualities, to win the final match of the EHF EURO 2018, against Spain, on Sunday.

“Our defense may see us through.”

That’s the immediate reaction of Andreas Palicka, when asked how Sweden are going to win the final against Spain at the ongoing European championship.

He might as well have added “and us goalkeepers,” obviously the 31-year-old shot-stopper from Rhein-Neckar Löwen is too modest to make such a statement.

However, it is a fact that the two “Löwen” keepers, Andreas Palicka and Mikael Appelgren have played a critical part, in Sweden reaching the final match, in Croatia.

You could always rest assured that at least one of them would perform way above average, and together they represent the best goalkeeping duo of the competition. Friday night, it was Palicka´s turn to shine.

He was the big star, when Sweden defeated their neighbors and arch-rivals from Denmark, 35:34 after extra time, in a breathtaking semi-final at Zagreb Arena.

Especially, the start to the second half, when Palicka saved the first six of the Danish shots, was impressive.

“I simply try to contribute what I can and it really is not difficult to do well, when you stand behind a defense formation like ours. The players are always very well prepared from a tactical perspective and we always fight brilliantly,” Andreas Palicka tells stregspiller.com.

“I think we all showed an incredible performance against Denmark.

“What our young team managed to do in this match was simply fantastic, and I am very happy,” says the experienced goalkeeper who joined Rhein-Neckar Löwen from Danish Aalborg Handbold in 2016.

No wonder he is happy now, considering the bad news just hours ahead of the match, when top scorer, Albin Lagergren, was ruled out with a brain concussion and Sweden’s number two scorer, Simon Jeppsson, was sidelined with a throat infection.

“Still, those of us who were left, were able to win the semifinal and we should be happy and proud about it.

“It was amazing how our young lads in particular, performed against an outstanding team like Denmark,” finds Andreas Palicka.

He is still a bit reluctant to talk about his own performance, even though it was absolutely crucial to Sweden’s triumph in the semifinal.

“I got a good start with some saves and that always makes things easier for a goalkeeper.

“I am just happy having contributed with what I could and I am glad that I was able to help my team.

“However, the semifinal was decided because of our defense work, it was world-class during the entire 70 minutes.

“This defense can make us European champions, I think.

“If we can defend just as well, as we did against Denmark in the final on Sunday night, I think we have a very good chance against Spain,” says Andreas Palicka.