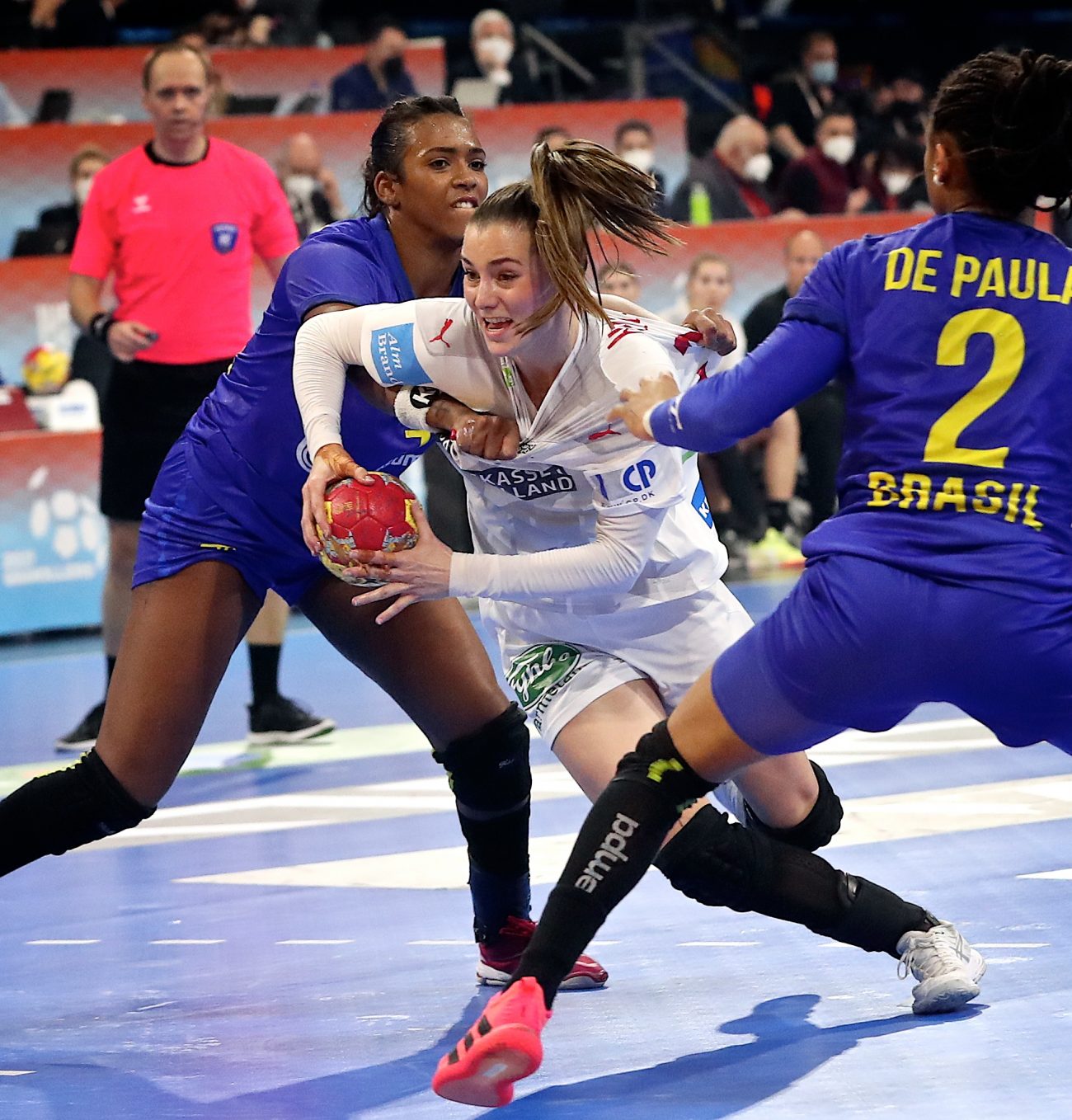 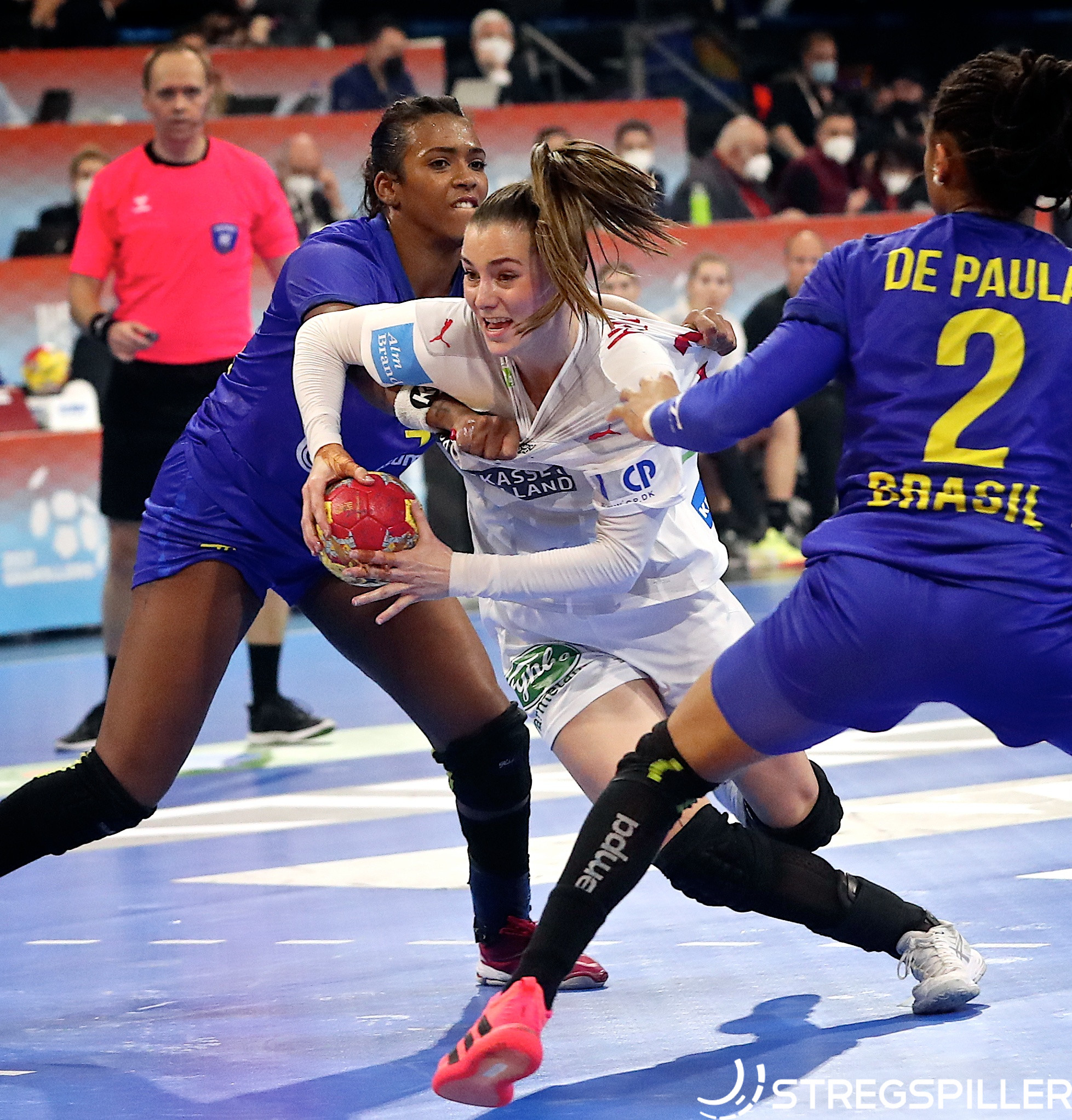 Denmark have been the standout team for me at Spain 2021 so far and I had them top of my power ranking. Coming into this match with six wins from six and conceding more than 20 goals on just one occasion, the only question mark that remained was how their attack would function in a tight battle.

Brazil were ready to bring that battle. The 2013 champions had arrived with their best team since winning that gold medal and were deserved quarter-finalists. A defeat to Spain two days previous exposed some weaknesses in the dynamic attack, which would have to be firing on all cylinders if they were to stand a chance today.

It wasn’t pretty but it was the test Denmark needed to prove themselves in at this championship. In a cat and mouse contest, Brazil couldn’t be shaken off for 50 minutes before they finally ran out of gas and Denmark pounced.

The victory takes Denmark through to their second major semi-final in two years, while Brazil can look pack with pride and ahead with excitement as they marked their return to the world’s elite.

The first quarter was an odd affair with Denmark looking to hold the upper hand and comfortable in defence but couldn’t make it count on the scoreboard, leading by a single goal. In fact, Brazil could count themselves unlucky to be trailing, considering how many chances they created.

While Brazil’s goals were often mini moments of magic, they weren’t coming often enough as they found an inspired Sandra Toft in their way time and time again, making 11 saves at 48%.

Denmark still couldn’t find their groove in attack, however, as they conceded turnovers or shot clean wide on some occasions. It was the wing duo of Lærke Nolsøe and Trine Østergaard who delivered the goods in the first period with a perfect 6/6 and Østergaard scoring on the break right before the buzzer to give the Danes a one-goal lead.

The second half began in much the same way but with Denmark looking a bit sharper in attack. Anne Mette Hansen had played right into Brazil’s hands twice in the first half, getting two soft suspensions by the referees who also played into their hands, but was getting her own back with some direct and decisive attacking through the heart of the defence.

Throughout the match, Denmark would open up a three-goal lead, then see it narrow, over and over again – until they finally made it 23:19 in the 47th minute. But this didn’t deter the spirited Brazilians, who began to trust their own wings and it paid off with three quick goals, in contrast to the long energy-sapping battles in the centre of the court.

Those battles eventually took their toll on the women in blue as they struggled to create much in attack and were becoming easy to beat in defence in the final 10 minutes.

Denmark’s depth and defensive power made the difference in the end as they slowly but surely wore their opponents down.

Brazil had their chances to grab the match by the scruff of the neck and were able to match the Danes in every department for 50 minutes before a 3:0 run for Denmark put their opponents on the ropes and there was no power for one last push.

Player of the Match – Sandra Toft

Sandra Toft was the official choice and it’s difficult to argue with that. 11 saves in the first half and 17 in total for 40%, she ensured Denmark didn’t find themselves stuck in a hole of their own digging.

The fact that she and Althea Reinhart are able to take turns in goal and consistently produce magic is a remarkable asset for this team. Goalkeepers make or break final weekend’s and they could very well make it a special weekend for the Danes.

What They Said – Louise Burgaard (Denmark right back)

“It was really back and forth for a long time but in the end, we kept our cool. We proved again that we have the most amazing goalkeepers in the world, they save our asses from time to time. We kept calm in attack, playing the same and winning our duels, so I’m really happy.

“We Danes are not really used to the really offensive defence but I think we adjusted well in the second half. We kept to our plan, rotated a lot and knew Brazil would play with the same players, so we wanted to run a lot and push their physical capacity and it showed at the end as we kept on grinding.

“I’m really happy, really confident and we are not finished yet. We have big dreams, we are in the semi-finals and we want more.”