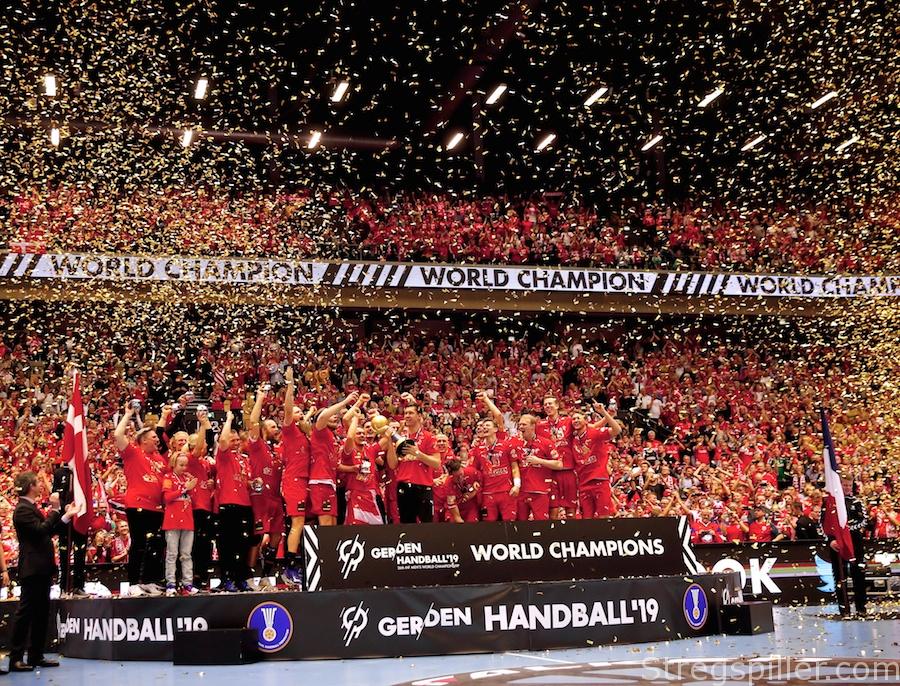 Denmark in a league of their own

MATCH REVIEW – With another astonishing performance, Denmark became world champions for the first time in history, leaving Norway without a chance in Sunday’s final in Herning.

The win was Denmark’s tenth from as many matches at this World Championship, making it difficult to argue against Denmark being deserved champions.

Norway were in the final for the second time in succession, having lost to hosts France in 2017.

Reigning Olympic champions Denmark were in their fourth World Championship final in history but still seeking an elusive gold after defeats to Czechoslovakia in 1967, France in 2011 and Spain in 2013.

Denmark had won all their matches on their road to the final, while Norway had only lost once – to Denmark in the Group C finale 30:26.

Denmark played arguably their best match ever in the 38:30 win over France in their semi-final, while Norway also made an impressive performance, defeating the German co-hosts 31:25.

Right wing Hans Lindberg was back from injury and back in the Danish squad, from which Johan Hansen had been axed, while one of Norway’s semi-final heroes Magnus Rød was reported fit after the hamstring trouble he sustained on Friday.

The handball gods must have been smiling this weekend.

First, Denmark made a performance out of this world in the semi-final against France, whom they ran over by 38:30 in Hamburg on Friday.

And on Sunday, they completed their work of art by leaving Norway without a chance in the final in Herning.

Norway were only able to match the Danes to 4:4, what followed was a Danish party at Boxen.

With 10 wins in 10 matches, the final two by eight and nine goals, Denmark are most worthy of the title of world champions.

Any speculation about Magnus Rød´s fitness was eliminated from the start. Rød was not only in Christian Berge´s starting line-up. He also brought Norway up 2:1 after Mikkel Hansen had opened the match by missing a penalty after 50 seconds.

For the first time in the competition, Morten Olsen started as the playmaker for Denmark, and just like the vast majority of Nikolaj Jacobsen’s moves at this World Championship, it was a success.

Norway maintained a one-goal lead until 3:2, then it was Denmark´s half as the entire team put on a show.

Through brilliant defending in front of Niklas Landin, who was just as brilliant after a slow start, the Danish attacking play also began to find its rhythm.

At 6:4, Denmark created the first two-goal difference between the teams and Norway’s first timeout came with Christian Berge’s side trailing 9:5.

The Norwegian defence did not seem to find any means to stop the Danish backcourt line, while Danish wings Lasse Svan and Magnus Landin, as well as Anders Zachariassen on the line, benefited from the attention their backcourt players got.

Thus, the Danes continued to increase their lead, which was five goals for the first time at 13:8 and seven by half-time.

Nikolaj Jacobsen showed his readiness to take action as soon as something seemed to go wrong as he called a timeout with Norway making it a six-goal game at 21:15 early in the second half.

The timeout worked at once and soon afterwards Denmark were leading by 10 goals for the first time, as Magnus Landin made it 25:15. A third goalkeeping switch, with Christensen returning between the posts, failed to have much impact for Norway.

In the final minutes, Jacobsen gave his full squad a run out to enjoy a taste of the triumph.

This allowed Norway to move a bit closer, but nothing could ruin the Danish celebration as the entire Danish bench was dancing with joy with minutes left to play, while Mikkel Hansen looked beside himself with happiness.

The day before the final, a colleague of me claimed that Denmark had nothing to fear if the two Croatians Matje Gubica and Boris Milosevic were to referee the final.

They were. They may have been a bit to the friendly side towards the Danes for parts of the first half, but the Danes certainly did not need any help from the men with the whistles on this day.

I could hardly believe that it would be possible for the crowd in Boxen to be even more frenetic than in the past days.

Well, I was proved wrong.

Boxen must have been living hell to be in for the Norwegians and heaven for the Danes.

“I never expected anything like this. It has been amazing to play so much at this competition and having got the chance to contribute so much.

“Just like in our first match against Norway, they could not do anything against our tactical concept.

“Our performance in defence as well as in attack was really good.

“I think we can be proud of what we have achieved in this tournament. Among other things, we can be proud of having played a great semi-final against Germany in Hamburg and we managed to reach the final for the second World Championship in succession.

“Of course, we did not play our best game in the final, but Denmark were simply the best team in the tournament anyhow.

“We are young team, and we still need some experience to be able to compete with a team like Denmark.”