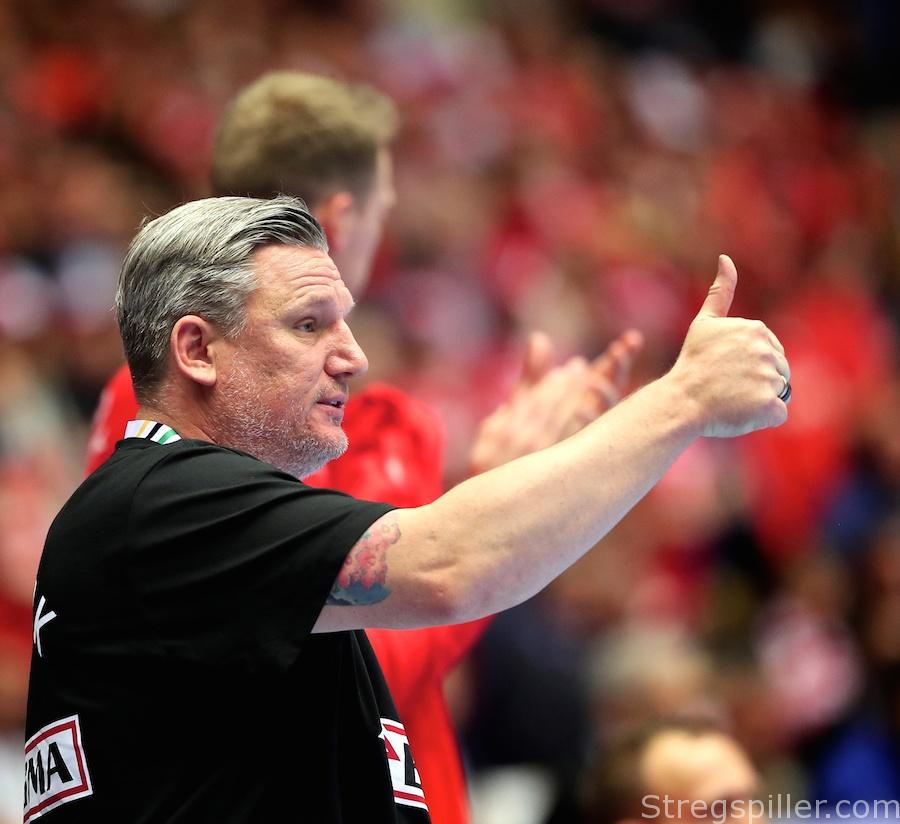 MATCH REVIEW – Denmark had to work hard, but the team was never in trouble, as they took their sixth win in as many games, at the 2019 IHF World Cup.

The game had written “revenge” all over it, as every Dane remembered the match in the Round of Last 16, at the 2017 World Championship, in France, when Hungary – surprisingly-  eliminated the Olympic champions.

This time there was no Round of Last 16, instead a Main Round format has replaced the former “Knock-Out” game.  Denmark carried forward four points after the preliminary phase, whereas the Hungarians arrived with one point only.

Missing in action were René Toft Hansen (Denmark) after his groin injury; he was replaced by his younger brother, Henrik, who reported  “fit-to-play”after his most recent practice session.

Left wing Casper U. Mortensen returned to the pitch after a knee injury had kept him sidelined for two of Denmark´s preliminary matches.  The same held true for Nikolaj Øris, who sat out the second half of Denmark´s previous match against Norway.

Left back, Immam Jamali. was out with a torn anterior cruciate ligament and there was doubt until the very last moment about their left back, Richard Bodo as well as right back, Zolt Balogh, who were both questionable.  Bodo’s name appeared on the team sheet, while Balogh was still missing.

Playmaker, Mate Lekai and line player, Bence Banhidi, were the two Hungarian players, who caused Denmark most trouble, whenever Denmark and Hungary met in the past.

Not so this time, as the match was decided in defense, where Denmark showed significant improvement once again.

At the start, neither Toft, nor Mortensen, nor Øris were on the court.

Instead, Mads Mensah covered the right back position, while Simon Hald and Anders Zachariassen took turns on the line.

After 22 minutes, Mortensen was sent on, but quickly substituted by Magnus Landin, as Landin was needed as the front player in Denmark’s 5-1 defense formation.

On Hungary’s side, defense specialist, Patrik Ligetvari, played left back in the absence of Bodo and Jamali, a move that actually worked quite well, which could not be said about Bence Banhidi.

The huge line player collected an early suspension when he fouled Hald (10th minute), and that remained his only defense action, before he was replaced by Adrian Sipos.

The score stayed even until 3:3, when the Danes took the initiative, once again enthusiastically supported by a jam-packed Boxen arena.  And, when Jannick Green replaced the unfortunate Niklas Landin in goal, the Danish game got a real boost.

In the fifteen minutes that remained in the first half, the 30-year-old Magdeburg keeper saved four of eight shots, including one 7-meter penalty. His brilliant performance helped Denmark a great deal to increase their lead steadily from 9:6, 12:8 to 15:10 at the half.

From the start of the second half, Hungary’s coach, Istvan Csoknyai, moved his defense formation a bit forward, a decision that worked, as his team came within three goals.

But, every time the Hungarians appeared to catch up, they were denied by Jannick Green, who did almost as well as Niklas Landin in the match against Norway.

Green was the key factor, why Denmark were able to maintain their lead between three and six goals throughout the second half.

Øris never entered the court, as Nikolaj Jacobsen continued to play with three right-handed backcourt players.  And, when Mads Mensah began to hit the net, things really went the right way for the hosts.

With less than eight minutes left to play, Henrik Toft was sent on the pitch, triggering a huge applause from the crowd, but he could not get on the scoreboard.

In the final minutes Denmark led 25:20 and two more Hungarian goals only were of cosmetic effect.

“I think we owe Jannick big time for this win. He was awesome, especially in the second half. It was a difficult to play against some Hungarian players for who we were not particularly well prepared. In the end, we won because of Green.”

“Without our key players, I think we can be content with our performance tonight.

“In the second half, the average age of the players we had on the pitch was 21 years, I think.  So, all in all, we can be satisfied.

“Denmark´s goalkeeper, Jannick Green, presented a huge problem for us, but apart from his performance, we were able to offer Denmark some resistance.  Beating Tunisia is what’s important, now.

What more can be said about the crowd in Boxen arena?

Once again, 15.000 were in attendance, frenetically supporting the home team, just the way it should be.

Denmark lead Group II together with Sweden, as both teams sit on six points.

Sunday, the Danes can sit back and watch, when Tunisia battles Hungary (a must-win match for Hungary to maintain their chances for a placement match) and Sweden face Egypt.