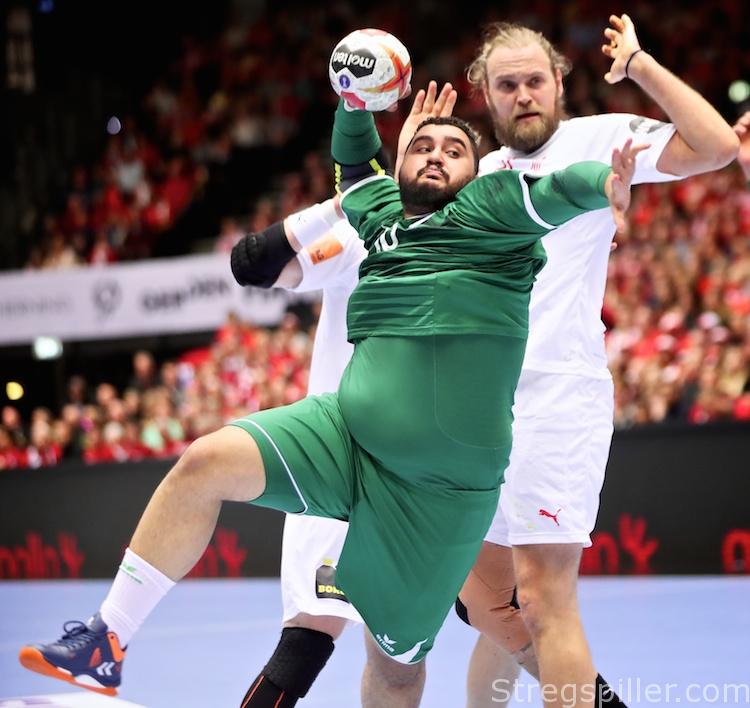 Denmark woke up – at last

MATCH REVIEW – A more focused performance in the last 25 minutes against Saudi Arabia, made up for a match that wasn’t one the hosts could be proud of.

Apart from some very obvious concentration deficits, it became apparent that Denmark is in trouble when the stars get a day off.

Denmark´s coach Nikolaj Jacobsen had arranged plenty of court time for his bench players, in the match against the weakest opponent of Group C.

However, one of coach Jacobsen’s substitutions wasn’t voluntary, as left wing, Casper U. Mortensen, sustained a minor knee injury in the game against Tunisia, this past Saturday.

Still, the Danes were the obvious favorite against a Saudi Arabian team that had lost their two previous matches by wide margins– 29:22 against Austria and 40:21 to Norway.

A fairly focused effort in the last 25 minutes meant that Denmark saved some of their reputation, while landing an acceptable 12-goal win.

The Danes had obvious problems concentrating on the task at hand, especially in the first half.  The match also showed that Denmark can quickly get into serious trouble without their key players.

Denmark’s starting lineup did not include Niklas Landin, Rasmus Lauge and René Toft Hansen, while Mikkel Hansen only took some penalty shots.

Øris, who played from the start was the one who scored the first Danish goal, equalizing at 1:1.  In the minutes that followed, it became apparent that Team Denmark had obvious problems concentrating, especially in defense.  All in all a rather worrisome observation.

Saudi Arabia had no issues keeping pace with the home team until 5:5, before Landin & Co. went up 12:6.  But, the hosts could not build the lead from there as several wide open shots missed the intended target.

As a result, Nikolaj Jacobsen found it necessary sending Rasmus Lauge on the pitch to restore some order.

Saudi Arabia managed to hang in, also at the start of the second half, as Denmark’s performance did not improve imediately.

The Saudis even cut the deficit to two goals  (18:16) four minutes into the half, at which point a furious Nikolaj Jacobsen called his second timeout.

The short-break did help and so did Niklas Landin who replaced the unfortunate Jannick Green in goal.  The Danes increased their lead via 20:17, 28:17 and 34:20, before Saudi Arabia scored the last two goals of the match.

The last impression is always the strongest, but the Danish squad may not be as deep as many have hoped for.

Two points and the fact that Denmark are mathematically assured of reaching the main round are the most positive take-aways after a game that left some pundits and supporters with mixed feelings.

Of course,they still are the odds-on favorite in Tuesday’s match against Austria, a game where the stars must return to the pitch.

Saudi Arabia, despite their heroic effort against Denmark, will be heading towards their fourth successive loss, when they meet Tunisia that same evening.