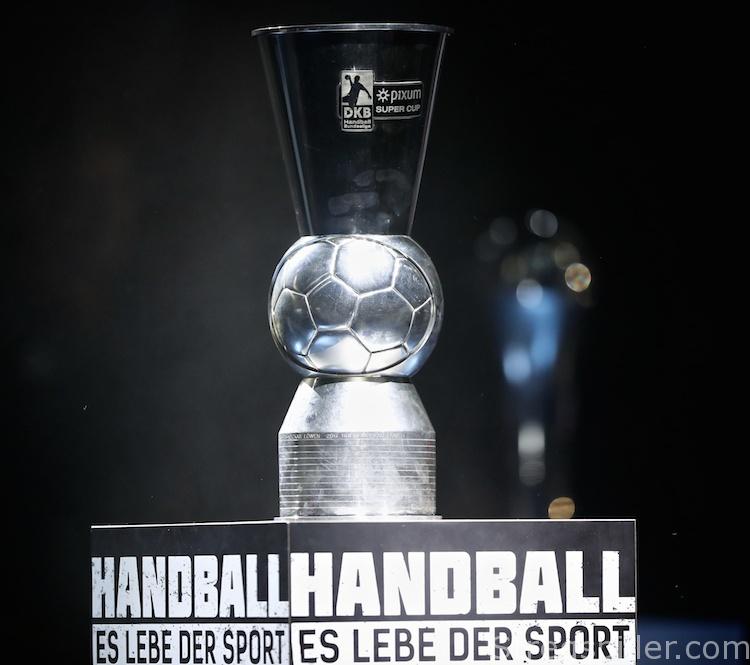 PREVIEW – The wait is over – club handball takes center stage again when German champion, SG Flensburg meet their eternal rival THW Kiel at Duesseldorf’s ISS Dome, in a battle for the 2019 PIXUM Super Cup, on Wednesday evening, at 19:30 hrs.

It will be the 26th Super Cup edition and THW Kiel will aim to leave an early mark ahead of the 2019/20 Handball Bundesliga season. Actually, 2015 was the last time when Kiel’s “Zebras” were able to lift the trophy – an eternity by the standards of the German record champion.

SG Flensburg will return to the ISS Dome with some fond memories as they put on the finishing touches to their 2019 German championship, in the final game of the season, defeating Bergischer HC 27:24.

Flensburg’s convincing success back in June stood in stark contrast to the club’s Super Cup performance in 2018, when Machulla & Co. flopped against an impressive “Loewen” team. Yet, it was one of the very few games the German champion would lose throughout the season. The 2018/19 winning streak of Flensburg did not fail to impress even the harshest critics.  In hindsight, the remarkable success weighs even more when considering the prominent departures of the likes of Thomas Mogensen (Skjern) and Mattias Andersson (retirement) in the summer of last year.

Before the upcoming clash between the two (handball) titans the reigning champion took some more hits over the summer as the team’s “heart and soul”, captain Tobias Karlsson, called it quits – he retired from handball – in addition to the departure of world champion, Rasmus Lauge.  Going forward, Michal Jurecki (former Kielce) and Dutch talent, Niels Versteijnen will help to pick up the slack.

Kiel, on the other side, lost the outspoken goalkeeper, Andreas Wolff – he joined Kielce – as well as line player Sebastian Firnhaber. They were replaced with Czech veteran, Pavel Horak (former Meshkov Brest) and Dario Quenstedt (former Magdeburg).

With all these changes how does HBL’s official season opener shape up?

Benjamin Buric already was a top Bundesliga keeper before he joined Flensburg, but in the 2018/19 season he stepped it up another notch and was a major factor in securing back-to-back championships. Will the Bosnian born goalkeeper deliver another stellar performance at the 2019 PIXUM Super Cup?

For a number of the pundits the rivalry between Andreas Wolff and Niklas Landin was some sort of a showdown between the world’s two best goalkeepers. After Landin’s spectacular performances at the 2019 IHF World Cup in Denmark and Germany there are not many who doubt his number one status anymore, certainly not in Kiel.

Bergerud (Flensburg) and Quenstedt (Kiel) will have to grapple with their roles as back-up keepers.

Hampus Wanne / Magnus Jondal (Flensburg) vs. Magnus Landin / Rune Dahmke (Kiel). Among the four names, Magnus Landin sticks out not only because of an outstanding performance at the World Cup and 196  cm in height but a rock solid 2018/19 season.

The Swedish / Austrian combination Nilsson / Bilyk will enjoy ten more months before Norway’s superstar, Sander Sagosen, will shake up Kiel’s back-court and the 2019 PIXUM Super Cup will be an excellent opportunity for either one of them to make his presence felt.

One of Flensburg’s big advantages in the past has been the club’s variable back court play. With Lauge out and Jurecki in this will change a bit, as both players – Simon Jeppson and Michal Jurecki – are a bit more predictable in their actions.

Going forward Jim Gottfridsson and Goran Johannessen will be the key players responsible for orchestrating Flensburg’s combat system. Both have been prone to injury in the past but as long as they are fit and on deck, expect Flensburg’s speed handball to click on all cylinders.

No surprises when looking at Kiel’s two right backs – Steffen Weinhold and Harald Reinkind will keep coming and Flensburg will have to push back hard to prevent major damage.

As Holger Glandorf is recuperating from injury, the crowd at ISS Dome may see a glimpse of Flensburg’s Dutch talent, Niels Versteinjen who will be listed next to Magnus Rod – quite possibly the most improved player over the past twelve months period. Rod will be key on both ends of the court – not only at the PIXUM Super Cup.

Lasse Svan, Flensburg’s new captain, and Marius Steinhauser will compete with Kiel’s dependable duo Ekberg / Rahmel.  If Svan can deliver one of his signature performances, Flensburg will be in good shape and if not Marius Steinhauser has to step up.  He will have to do it anyway in the 2019/20 season and the PIXUM Super Cup may be a good place to begin.

Who will keep the upper hand? On paper Kiel appear to have the upper hand but when adding Johannes Golla (Flensburg) to the equation, coach Machulla may just have enough to make the difference on the offensive end?

The fight between some of the world’s best defenders will be a particular highlight handball fans can look forward to.

When the 2019 PIXUM Super Cup throws-off, Alfred Gislasson’s won’t be anywhere near Duesseldorf’s ISS Dome but his presence will be felt everywhere in the arena. Under the auspices of Gislasson Kiel claimed five Super Cup titles. On Wednesday, Jicha will take his first shot at the trophy from the bench.

In the much expected 100th edition of Germany’s “Derby” and as so many times before THW Kiel looks like the odds on favorite.   Flensburg’s managing director, Dierk Schmaeschke, even downplayed the PIXUM Super Cup as a “very nice test” before the 2019/20 Liqui Moly HBL season, yet a game not only he looks forward to.

Will the underdog from Flensburg continue where they left off in June or will Kiel’s new head coach, Filip Jicha, deliver a first title on the very first occasion?

As the ISS Dome is not filled to capacity yet, it’s still time to see for yourself.