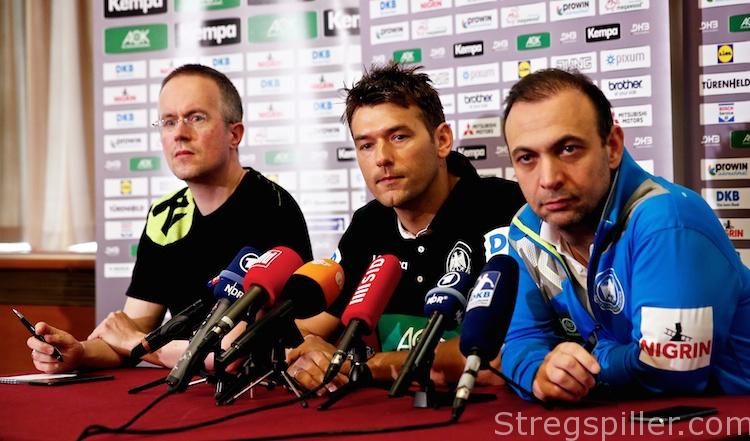 A good week ago, Germany lost the decisive game in the main round of the EHF EURO 2018 to the eventual champion, Spain. Ever since, the pressure for head coach Christian Prokop, who took over from Dagur Sigurdsson last spring, has been building. Leaving the lackluster performance of the team, as well as the fact that he made a number of other mistakes aside, things did not go well for Prokop after his team’s elimination from the tournament.

The day after the disastrous loss against Spain, one of Germany’s main newspapers published a report, claiming that Prokop left the training session, that preceded the crucial match, apparently infuriated because players didn’t follow his instructions. The first question that came to mind: Who leaked the information – damaging news that could lead to Prokop stepping down from his position?

Some people point to Bob Hanning, the vice-president of the German handball federation. He had pushed hard to sign Prokop and eventually the federation paid EURO 500,000 to his former club Leipzig, where he had a long-term contract. The very same Hanning appeared on a major TV sports show this past Saturday and when asked if DHB was in a position to fire the coach while „wasting“ the aforementioned monies, he said: „Whe are in a position to do so, but of course we hope that it won’t be necessary.“

To me it seems like he is not convinced of Prokop anymore. Hanning added that DHB would analyze the situation and reach a conclusion within the next four to six weeks.

Are you kidding me?   Why does it take that long, finding out if it works or not between the coach and his team? Having listened to the statement, I think it’s mostly about who might follow and when. And if Ljubomir Vranjes had just one job, he would be on top of the list.

Why? For one, players would take him seriously. He was a world-class player himself and won numerous titles when coaching his former club Flensburg, including the Champions League. Unlikely that players would complain about his instructions during practice and / or games. Would Germany’s handball team reach the semifinals in each and every tournament? I guess not, but finishing behind the Czech Republic – a squad that featured several players from Germany’s second division – doesn’t leave a good impression either.

Let’s not forget that there is a World championship on home soil coming up, next year. In my opinion, the federation should act quickly. Six weeks assessing this untenable situation might be five weeks too long. Either the people in charge have confidence in Prokop and believe he is the one to guide the team to future success (by the way, he signed a contract until 2022), or they believe that this job is too big for him. In latter case, there is no time to waste, considering the lofty goals of 2019 and the Tokio Olympics.

From what I know and listened to during the last days of EURO’18, there’s a lack of chemistry between Prokop and the players.  In Croatia, he opted for the best possible team after making the adjustments, except Fabian Wiede – so the core of the roster will remain the same for years to come.

At this point, I don’t think it’s possible that he’ll win back the trust of this group. Not after what happened before, during and shortly after the tournament.

I do believe that Prokop is a smart person and a very capable coach. What he accomplished in Leipzig is just amazing. But on the national team level, he doesn’t have the chance to work with players on a daily basis. Trust and spirit are two key elements if you want to win on the international level.

In Croatia, Germany’s team – unfortunately – didn’t trust Prokop and lacked the spirit and energy of two years ago.  It remains to be seen if Prokop is on his way out or if he can stay on the bench?  For now, it all leaves “Deutsch-land” in confusion.