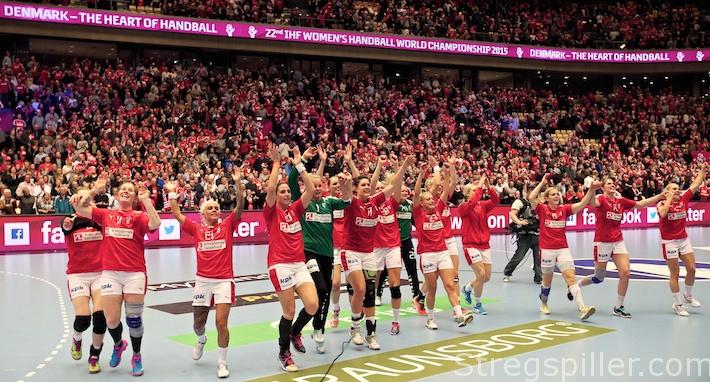 It was a good outcome – for team Denmark, the organizers of the tournament, (most) spectators and TV ratings. 26:19 (15:7) was the final score between the host and the opponent from Sweden after 60 minutes of play, at World Cup’15.  After two precarious performances of the squad in red-and-white, Line Jorgensen & Co showed a different face against the vice-champion of EURO 2014.  Unlike in the previous matches against Montenegro and Hungary, Denmark’s defense was functioning from the very first minute.  While coach Sivertsson’s team was able to keep pace with Denmark’s high speed performance in the opening minutes, it all went downhill from the middle of the first half, when Sweden was outscored 9:1 before the buzzer sounded.  The eight-goal deficit was too much to deal with for a Swedish crew that fought courageously until the very last minute of the match.

The decision of Denmark’s head coach, Klavs Bruun Jorgensen, to start playmaker ”Mulle” Kristiansen on the left-wing position, while playing defense, was possibly the most critical change in the Danish line-up.  It paid-off big time, allowing for a transition game at much higher pace then seen before, when Kristiansen joined off the bench.

Rikke Poulsen, Denmark’s goalkeeper received the honors at the end of the match but her output was representative of a collective, Danish defense effort.  Rikke Skov, Pernille Holmsgaard and Stine Bodholt are the names that come to mind when assessing the much improved performance of Denmark’s defense players.

A quarter-final match against Romania and the world’s best handball player, Christina Neagu, in front of another sell-out crowd, at Jyske Bank Boxen, on December 16.  Mission impossible for coach Jorgensen and team?  Not at all.

Norway had the advantage of staying in their ”home arena” in Frederikshavn, supported by 2,000 + enthusiastic fans whereas Germany had to travel 285 kilometers north from Kolding.  Despite a potential knee injury of Mari Molid, Norway was the obvious favorite. She started the match on the bench anyway.  Germany´s coach Jakob Vestergaard had stated that his team would try to play at the same pace as Norway for the entire 60 minutes.  The only question remaining – would his women be able to do that?

Surprisingly, Arena Nord was not nearly filled at capacity, but the many Norwegians that were in attendance, arranged for a great atmosphere – as usual.  And unlike the few German fans, Norway had something to celebrate.  Following an even beginning, four successive Norwegians goals changed a 7:6 deficit into a 10:7 lead, and from then on, coach Hergeirsson’s team was dominating the match.  Neither squad was particular good converting on penalties but missed shots from the 7-meter mark did not have an impact on the result – after 30 minutes Norway was leading by five.

Susann Müller, who had a lousy first half, hit the target more frequently after the break.  Yet, her effort was far away from making a difference.  Soon after it began, Jakob Vestergaard abandoned direct coverage of Nora Mørk, as it did not pay off at all.  Katja Kramarczyk, Germany’s goalkeeper, did her best to get her team back in the game, but her heroic efforts were not sufficient either.  Norway, who did not miss Molid’s absence, could increase the lead to eight goals (25:17), before  Germany was allowed to reduce the gap towards the end of the game.

Heide Løke was simply impossible to control.  Nine goals did the experienced line player score on top of doing a brilliant job on the defensive end.

While Germany will make the trip home, Norway is ready for a quarter-final against the winner of the match between Montenegro and Angola, Monday night in Herning.  Despite a number of surprises – and some sensations – seen at this World Championship already, it is probably fair to say that Montenegro will be Norway´s opponent in the next match.  A remake of the Olympic final 2012 which Norway won and the unforgettable, tournament ending game at the European Championship later in the same year is coming up.

It is  fact that there will be a new World champion as Romania pulled a surprise win, defeating the ruling champion of Brazil.  The Netherlands clinched their quarter-final berth by thrashing Sasa Boskovic´s decimated Serbian team by 16 goals.